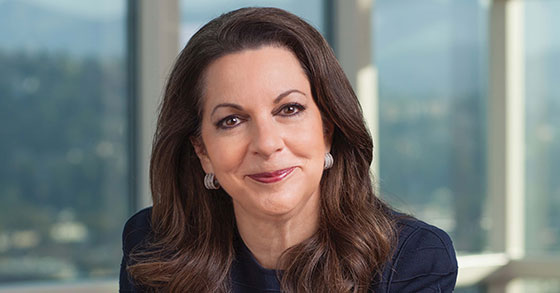 Julia Stewart, chair and CEO of DineEquity (Applebee's and IHOP) knows about determination, hard work, and always learning and improving. It's what she's been doing for years - and doing it well.

Stewart's first work experience was during high school at an IHOP, beginning what she calls "a lifelong love affair with the restaurant industry." From the very start, she says, she found it fun, exciting, and rewarding to "be part of a team that provides people with a warm, hospitable, and enjoyable place where they can find good service and good food." She had found a profession that suited her and would provide a lifetime of reward, both personally and professionally. Over the years, Stewart has worked with brands including Taco Bell, Burger King, Carl's Jr., Black Angus/Cattle Company, and Spoons Grill & Bar, earning a reputation for making smart decisions and repositioning brands for success.

She's also been a pioneer. She was the first female CEO of IHOP, where she implemented significant strategy shifts that invigorated the brand, strengthened its franchising position, and improved the company's financial performance, more than doubling system-wide sales. She also served as president of Applebee's.

In 2007, she spearheaded the merger of Applebee's Neighborhood Grill & Bar and IHOP restaurants into a new company called DineEquity. After establishing DineEquity, she used a similarly focused, consumer-centric strategy to restore Applebee's to the leadership position in casual dining. Today DineEquity franchises and operates more than 3,600 restaurants in 18 countries under the Applebee's and IHOP brands, with more than 400 independent franchisees and 200,000 employees.

Stewart is a founding member of the Women's Foodservice Forum, an industry organization dedicated to the development and advancement of women--an important cause to her. When reflecting on her own career, she acknowledges there was "a certain amount of stereotyping," but adds "success depends on having the most capable person in every position."

Stewart believes women can rise to the top by believing in themselves, always improving, listening, guided by a set of values, being inclusive, and being dedicated to learning every day. "Leadership is blind to race, age, sex, and religion. If you are capable, and you help your people develop, you will not only be seen as a leader... you really will be a leader."

Growth plans: We are focused on building on the iconic status of each of our brands through our culture, brand equity, and positioning, providing quality to our guests, and development. As the only restaurant company with two number-one brands (IHOP in family dining and Applebee's in casual dining), one of the tenets of our plan for continued growth is innovation - in our menu, guest experience, and our restaurants, domestically and abroad.

How did you rise to the top?

Determination, hard work, and always improving. I've learned a lot from watching people succeed, and even more from watching people fail. At DineEquity, we have an incredible team of passionate, bright leaders who are all driven to success. The way they succeed, and what propelled me to my position, is a core set of values - personal and business - that inform every decision and every action on a daily basis. Without those values, I don't believe I'd be where I am today, and I don't believe Dine would be the only company in the restaurant industry with two number-one brands.

My very first experience in the restaurant industry was a job as a server at my local IHOP during high school, which began a lifelong love affair with the restaurant industry. I found it fun, exciting, and extremely rewarding to be able to be part of a team providing so many people with a warm, hospitable and enjoyable place they could come to find good service and good food. And all these years later, I still do. One of the main elements that I liked then, and I love now, is the daily feedback from guests, our franchisees, and team members. After college, I worked my way through virtually every department and function in the industry, starting in marketing, then operations and restaurant management, general management, and more for some of the strongest brands in the business.

Was becoming a CEO/president always part of your plan?

I always knew I wanted to be a leader, to be accountable. My father used to tell stories about how I'd organize the kids on the block, so it is somewhat a part of my DNA. Loving this industry as I do, I could make a valuable contribution toward leading a company to fulfill the very best it has to offer. But I also realized I had to prepare and work at learning everything I needed to know. That's why, after many years as a marketing executive, I left and took a job as a general manager in a restaurant so I could learn the operations side of the business. Admittedly and as full disclosure, I was on the fast-track program at the time. In retrospect, while a bit of a risk and maybe not logical to some as a career move, it was invaluable to me.

Did you have a mission statement for your business life?

While I can't say that I have a specific mission statement, I definitely have had a number of statements, goals, and values that guide my decision-making and how I go about my business on a daily basis. Chief among these is a set of what I call "life goals." Since the start of my career, I've defined, recorded, and referred to a set of goals on a yearly basis. These haven't always been the same, as they have evolved along with my career. Additionally, I have a core set of values that are important to me, and even more importantly, that are in line with the values we have at DineEquity and our brands. From a "mission" perspective, it all has to do with the guest. We want to provide every guest, every day (nearly 2 million per day around the world) with the best possible experience every time they visit.

How did you prepare yourself and set goals that led you to the C-suite?

I worked in all aspects of the industry to ensure that I was well prepared to lead in all areas, not just marketing, where I started, or operations, where I spent a good deal of time. I've always prided myself on learning from others, good and bad, and learning from situations. That helped prepare me to run a company.

When and where did you gain leadership experience/knowledge?

As I mentioned, leadership came to me early in life, and I've built on that throughout my career. The breadth of my experience in all facets of the restaurant business is key to my ability to lead, as is surrounding myself with the best available talent, which we have at DineEquity. I've watched and learned from some great leaders, and some who weren't so great. At times, I learned more about "what to do" from seeing "what not to do"!

What leadership examples did you learn from?

I don't particularly subscribe to one philosophy or one example of leadership. Instead, I think I've learned best by watching those around me who lead by example. There have been a number of people I've encountered throughout my career who have shown me the importance of communication throughout your organization, at every level, and how critical it is to the success of your business to foster an atmosphere where people can feel empowered, valued, and involved. Those were great lessons. Most important, I'd say I never stop learning. I am fortunate to have the opportunity to be around great business and leadership minds at various conferences and through board involvement, my direct reports, and our DineEquity team members, so I keep learning every day.