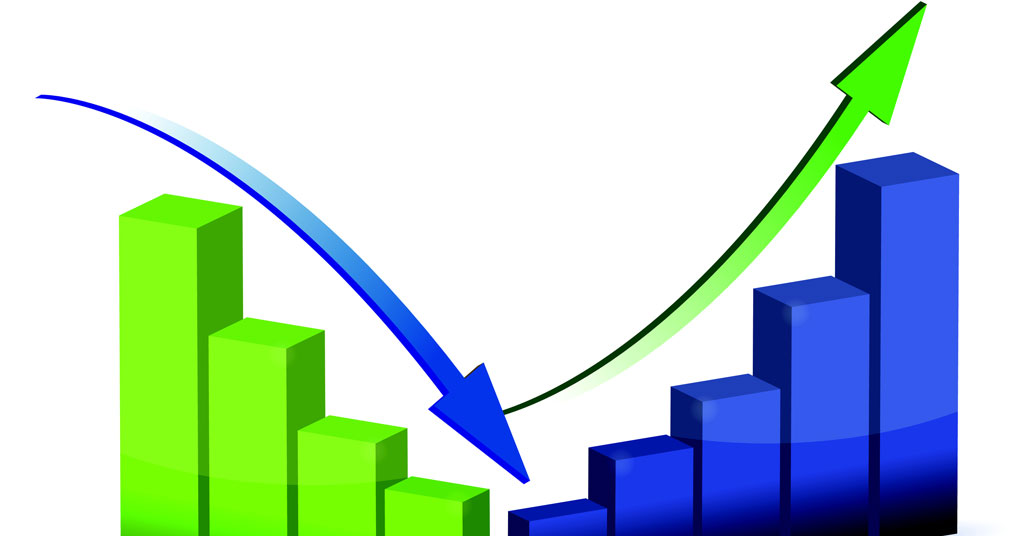 This is the fifth article in a series on franchise sales by the numbers throughout the pandemic, and is a preview of the latest findings from FranConnect’s ongoing study of franchise sales insights coming out of its September 2020 Franchise Sales Index Report. The information presented here is based on the data from 607 franchise brands that has been aggregated and anonymized in the hopes of helping you evolve as the franchise market is evolving.

Editor’s note: The first article is available here, the second here, the third here, and the fourth here.

In recent articles running here, I asserted that, based on Q2 trends, it appeared there were changes occurring in buying behaviors that were being highly influenced by trust and transparency that manifested in referrals. And after another quarter, it is clearly becoming one of the single most important changes required to drive sales.

Leads down, deals up

The greatest declines occurred in Personal Services, down by 36%, and in Retail Food, down by 13% in Q3. Conversely, when looking at the change quarter to quarter, Commercial & Residential Services rose by 6% and QSR by 4%. One vertical, Business Services, is seeing more leads than pre-pandemic. The factors here appear to align in favor of essential vs. non-essential businesses.

Where we find the good news is that deals actually increased in Q3 to 1,625m from 1,515 in Q2. This represents an increase in deals of 21% – despite a decline of leads of 10% within the same quarter. For those still leery about asking for a sale during the pandemic, be aware that just within the FranConnect system we have seen 3,140 sales accomplished in the past 6 months.

These numbers reflect improvements in conversion rates, which increased from 0.9% in Q2 to 1.1% in Q3, which is higher overall than our data showed in 2019 when conversions were running at 1.02%. 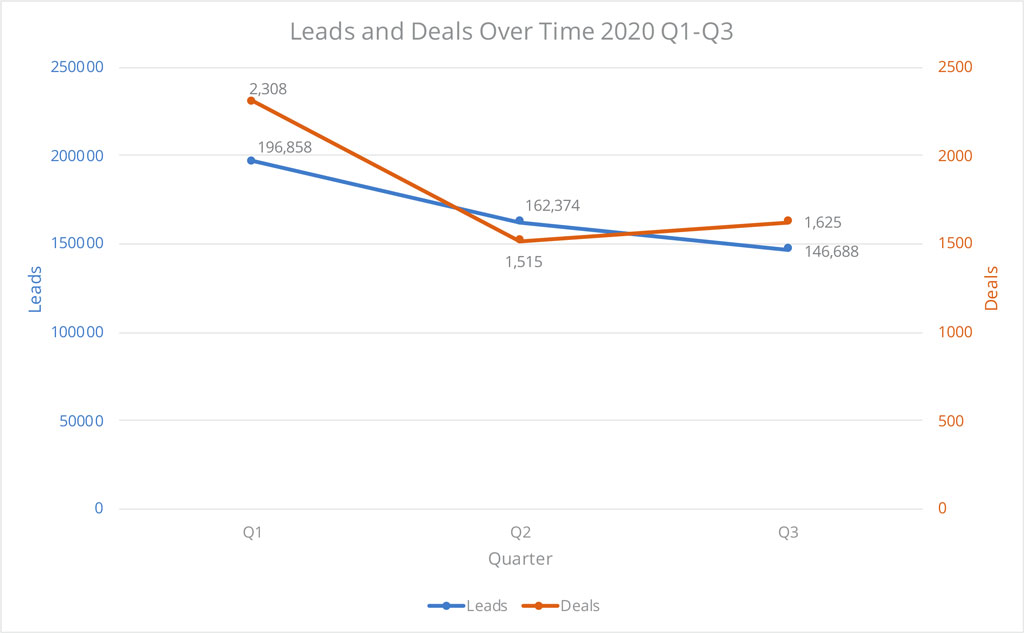 Deal conversion rates increased in every franchise industry sector except Retail Products & Services, which saw a significant spike in both Q1 and Q2, but slipped to 1.5% in Q3 (still trending above the overall average of 1.1%).

When analyzing the data by market segment, we found that based on size – ranging from Micro-Emerging (10 or fewer locations), Emerging (11 to 75 locations), Mid-Market (76 to 100 locations) and Enterprise (200+ locations) – every segment had greater lead-to-deal conversion rates in Q3 than in Q2.

My belief is that although we are seeing a decline in total leads, those we are getting are of a higher caliber, coupled with economic motivating factors such as unemployment rates of 7.9% (BLS, September).

Deals in Q3 attributable to franchise referral consultants (brokers) actually exceeded the number of such deals in Q1, before the pandemic fully struck. We also found that non-broker referrals (friends, family) increased in both Q2 and Q3, as did deals attributed to franchisor websites.

Now, more than ever, the value of trusted lead sources has risen as prospective franchise buyers consider an entry into franchising. And, it appears from the data, trust in (or at least reliance on) franchise referral consultants also has grown as prospects seek expert advice during these uncertain times. During the pandemic, franchise referral consultants have exceeded the number of leads and deals they have generated compared with their pre-pandemic numbers.

My conclusion is that this is a function of two current trends: 1) buyers’ reliance on trusted friends, family, and advisors; and 2) a move toward a “self-service” buying process in which prospects are turning to brands that can be researched without having to engage directly with the sales staff until they have narrowed their search to a select few. There is ample evidence that buyers are turning to portals, online news, industry news, and franchise websites where such information is readily available.

As you’ll see in the next chart, the conversion rates for referral sources in Q3 speak for themselves:

These are dramatically superior lead-to-deal rates than the average of all lead sources at 1.1%, and are performing better than before the pandemic. 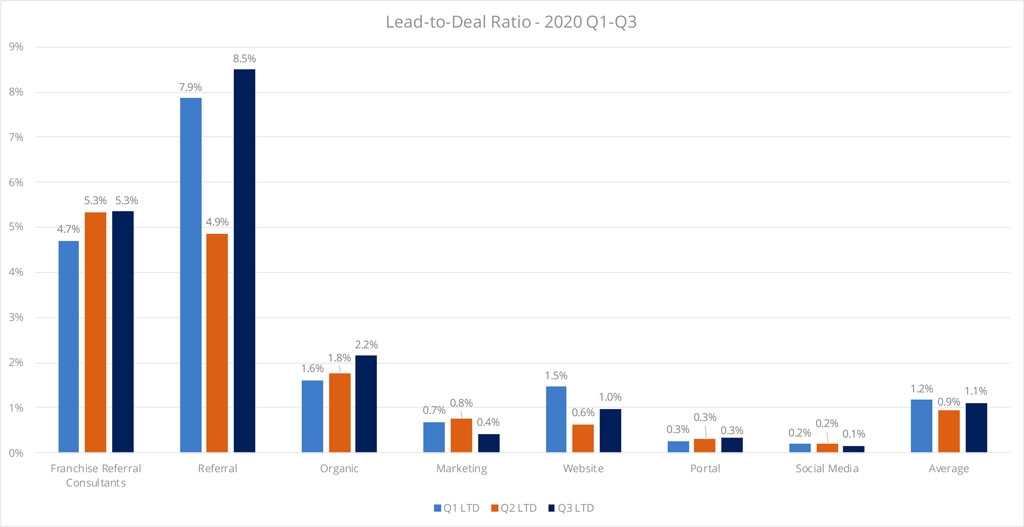 When analyzing the performance of referrals – the top source for lead-to-deal conversions – we aren’t finding enough franchisors calling on their franchisees and asking them for their support in promoting the brand. More are taking the path of least resistance, which is offering them referral fees. I actually spoke with a franchisor this week who is increasing the amount that they will pay a franchisee for making a referral that becomes a sale – an unprecedented payout of $30,000. As this should be something that is reported in the FDD, it will likely have the opposite effect on a prospective buyer who will likely conclude that the individual referring has too much of a vested interest in making the sale, which will erode trust.

• 65% of new business comes from referrals from friends or family

Ask your franchisees for a testimonial

Now is the time to ask your franchisees to provide a testimonial. Why are testimonials so effective? They build trust, they aren’t sales-y, and they overcome skepticism.

You can easily assemble a collection of videos from your franchisees for use on your websites and through campaigning through email and video campaigns. If you’re not doing this, you are missing one of the most important sales strategies. Simply asking your franchisees to take out their cellphones and hit the record button is all it takes. You can also have them start a Zoom meeting and hit record. It couldn’t be easier. Consider these guiding questions:

Once the testimonial video is recorded, it can be uploaded on a transfer site such as WeTransfer or Dropbox. It’s really quite easy to accomplish, and before you know it you’ll have dozens to incorporate into your email and text nurturing campaigning and for adding to your website.

Franchise lead referral consultants (brokers). These top 4 performers represent an average 5.3% closing effectiveness rate, 60% of leads from all brokers sources, and 65% of all broker deals:

Franchise portals. The top 5 performers represented 68% of all leads and 69% of sales:

We are seeing rays of light on the horizon as more franchisors report improvements in the quality of leads, the ease in which they are able to engage with their prospects, and the reengagement of leads previously moved to a “dead lead” status through lead nurturing campaigns.

Finally, consider the wisdom of Jim Rohn, who said, “Successful people do what unsuccessful people are not willing to do. Don’t wish it were easier; wish you were better.”

Extraordinary Employee Incentives Still in Play in Today's Labor Market
Where Have All the Workers Gone?
Sponsored
Wait, The Vitamin Shoppe® Awarded How Many Franchises This Summer?
Potbelly Operator to Add 14 More Locations
FLDC22 Kicks Off in Atlanta in Just 2 Weeks!
The 5 Biggest Business Trends for 2023