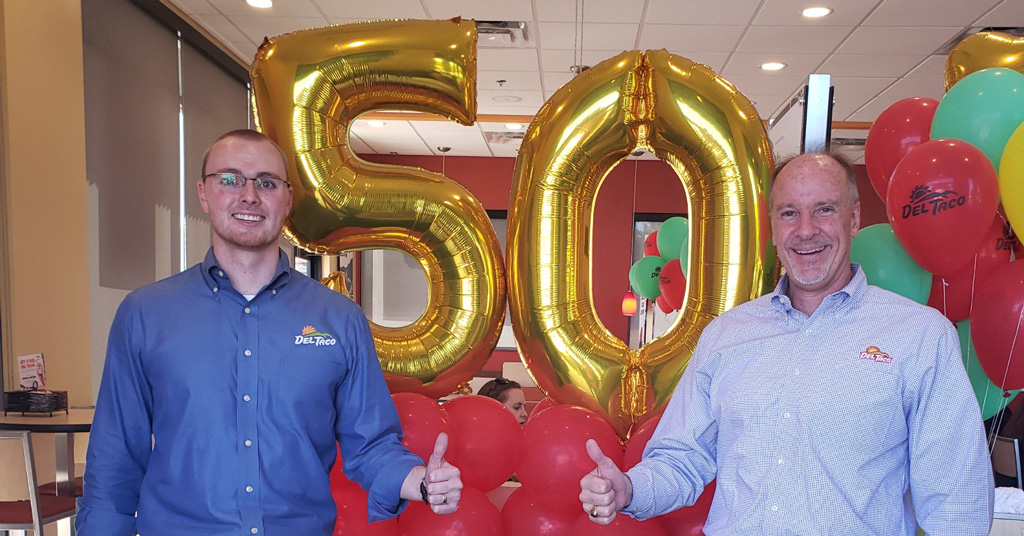 Backed by experienced leadership and a proven business model, Del Taco takes its motto "One Team, One Voice, Trusted Partners" to heart as a brand firmly focused on growth with franchisee partners.

This collaborative spirit is a big reason veteran Del Taco operator Brent Veach remains a one brand man—bullish on the future as the largest multi-unit franchisee of the quick-service plus chain.

Veach, who recently opened his 50th restaurant, is focused on the expansion of his own business legacy with a thoughtful approach.  When the opportunity opened up for eldest son Craig to join the family-run restaurant company full-time, Brent turned to Del Taco's CEO John D. Cappasola Jr. for advice.

"John is such a proactive and broad thinker," says Brent. "He said, 'Let's bring Craig on and have him work for the company.' For me, that checked a lot of boxes. In my heart, I wanted my kids to join the company, but I really left it up to them. What my wife and I have tried to instill in our children is a strong work ethic."

The chance to learn from some of the best operators in the business was a no brainer, says Craig, who took part in 10 months of immersive benchmarked corporate training in 2018 before joining the Veach family fold of restaurants, located in Arizona and Colorado.

Now 25, Craig grew up with the iconic Del Taco brand. His summer vacations from school were spent in his father's restaurants, where he worked every job, rising up the ladder to become a team leader and shift manager until he left for college. Armed with a management information systems degree from Baylor University, Craig spent three years at an oil and gas company in San Antonio before returning home to Del Taco.

The younger Veach brings a systematic thought process to learning the business from the ground up, similar to his father, a former CPA who left the corporate world for Del Taco in 1999—and never looked back.

"Del Taco is a great brand, and there is a lot that is done phenomenally well here," notes Craig, who currently serves as an area director of restaurants in Phoenix. "What I bring to the table is probably just a fresher perspective. We talk about it in the stores all the time about having a fresh set of eyes coming in. It is such a strong team, and there is a lot I'm learning, from my side, right now."

Del Taco leadership listens and learns from its franchisees at every turn. During his time with the brand, Craig "tried to document as much as possible what was good and ways we can improve," observations he shared weekly and in a wrap-up session afterward with Del Taco leadership.

The feedback was an invaluable look at ways to enhance above store leadership for both the franchisor and franchisee, a component often lacking in the QSR industry, says Brent, who also serves as president of Lake Forest, Calif.-based Del Taco's Franchise Marketing Advisory Team.

With the first of three Veach children firmly on board the family business, Brent is now pondering an even bigger picture.

"When I sign an agreement and put on a Del Taco shirt, that comes with a 20-year commitment on a store," Brent says. "I tend to be a long-term thinker, and this has given me a larger meaning to the business, as more than just a job and a means. It has made me think more about generational planning and the impact on the entire family and family tree going forward. It's been a great opportunity."

Serving up fast and affordable fresh Mexican fare, Del Taco is positioned for growth as a winning franchise with a "guest-centric, combined solutions" model and business-minded leaders focused on developing and improving Del Taco's "one team" philosophy. The company and franchise teams work well together to improve the brand continuously—and it shows, Brent says.

"At the end of the day as a business owner and franchisee, we need to be able to make money and have a strong ROI," Brent says. "Del Taco's business model works and is very sensitive to the success of the franchise partners. There is significant opportunity to grow restaurants within the brand. We currently have 600 units, and there is no reason it couldn't be 6,000 as we move toward a National, Tier 1 level. "

Ready to discover more about Del Taco’s franchise opportunities? Head over to deltacofranchise.com.