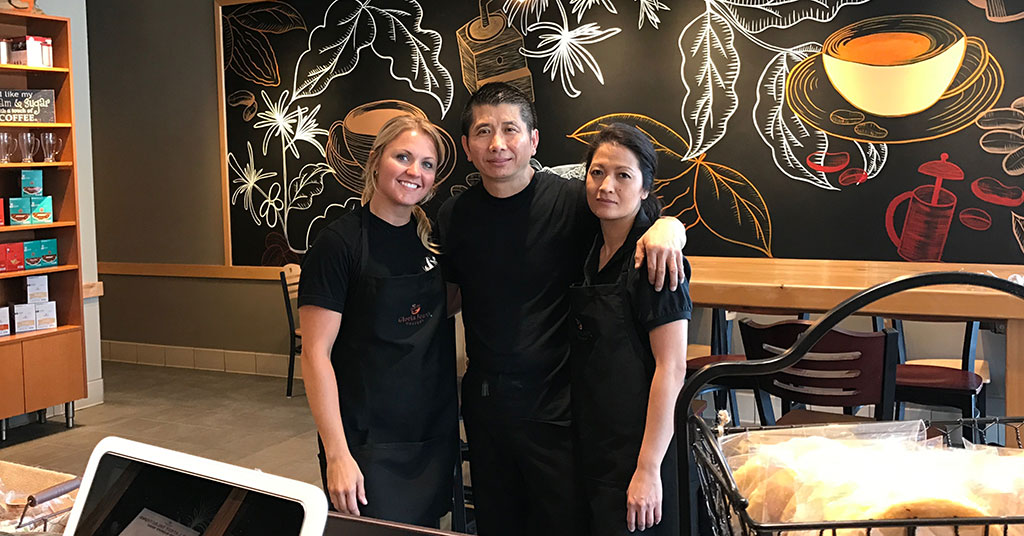 Gloria Jean’s Coffees franchisee Eric Vo’s operating mantra for success is simple. “I love to help people,” says Vo, a franchisee of the premier coffee brand since 2003. “That is just my life.”

Vo brings his altruistic compassion for people to the premier global specialty coffee house franchise each day as a spirited ambassador of the burgeoning brand, with more than 900 locations worldwide. He operates seven specialty coffee outlets, in Michigan and three other states, with franchise partner Sarah Racer, who, as a teenager, worked at Vo’s Great Lakes Crossing mall location in metropolitan Detroit.

Racer grew up with a love for coffee and aspirations to be a firefighter.

These days, she serves both the Oakland County, Michigan, township of Oxford as a firefighter paramedic and her gourmet coffee customers as a co-owner of a growing portfolio of shops.

No matter how busy, Racer always made time over the years to periodically return to her local Gloria Jean’s Coffees to lend a helping hand. When Racer approached her old boss with a business idea in 2014, it was an offer the entrepreneur couldn’t refuse, notes Vo.

“My team—my employees—I treat them like family,” says Vo. “Over the years, they have grown up to become doctors, architects, and a full-time fire fighter, like Sarah. Her dream was to be a firefighter and her dream came true. And now she is also my left and right hand person. I’m so proud of her.”

Vo and Racer make a great team. Most recently, the pair opened a street front location in Auburn Hills, Michigan, as part of the brand’s effort to expand outside its traditional sites and include drive-thru locations. Their eighth coffee shop will open in the spring in the Jerseyville Mall in Illinois.

“I believe the product is better than any other brand,” Vo says. “My dream is to one day build a Gloria Jean’s next to a Starbucks –as close as I can. People think I’m crazy when they hear that story, but I’m not crazy. I believe in Gloria Jean’s with my whole heart and I want to get the product out there-everywhere.”

Vo was one of a dozen children of a prominent Cambodian family, who resettled in Vietnam, a neighboring country he would flee in 1979 to escape the communist regime. He landed in Michigan to study mechanical engineering and worked in supervisory positions at United Technologies Automotive for 12 years until the global recession hit the industry.  When Vo quit his job to help run a bakery, he found his true calling. He opened his first Gloria Jean’s in 2003 and has never looked back.

Now Vo is on a mission to spread the good news of being a franchisee of the Australian-based brand, founded in Chicago and a leader in gourmet flavored coffees, varietals, and blends. With over 25 years of franchising experience, Gloria Jean’s proven franchise model is built for expansion in the U.S., says Vo.