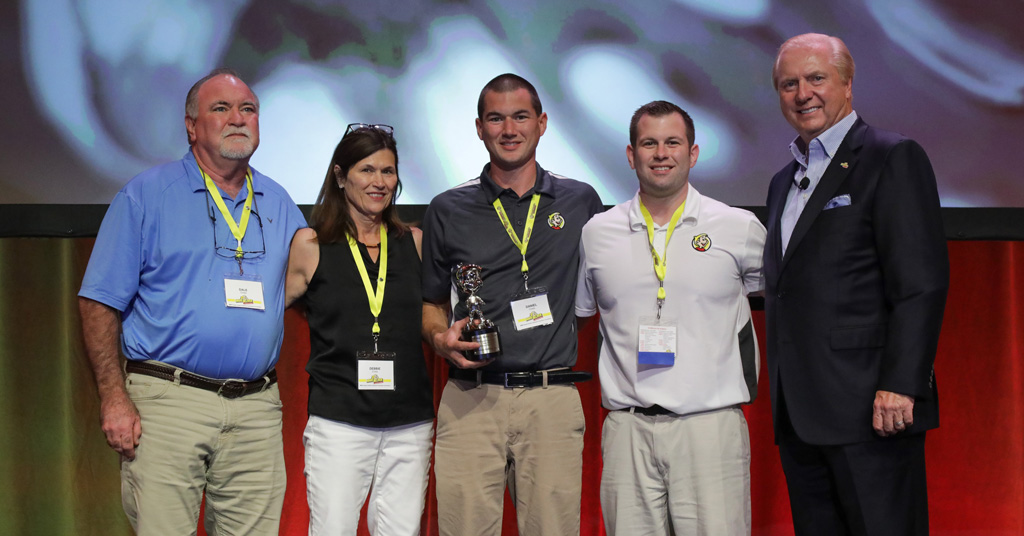 The top-ranked, 550-unit franchise is riding a wave of momentum with the continued expansion of its national footprint and a sales streak of more than eight years of positive same-store sales.

“The opportunity to have all our franchisees together truly demonstrates the strong sense of community we have created and the commitment our teams have made to the Hungry Howie’s brand,” says Steve Jackson, president and CEO of Hungry Howie’s. “Their unrelenting efforts mirror our company values, and their positive impact in local communities generates tremendous results and relationships.”

The convention featured engaging workshops, educational presentations, and a ceremony to recognize franchisees for excellence and unparalleled service.

James R. Hearn Award: Veteran franchisee John DeAngelis received the James R. Hearn Award, named in honor of Hungry Howie’s late founder Jim Hearn. DeAngelis, who joined the brand in 1983, was recognized for his outstanding lifelong contributions as a brand ambassador and driving force in the growth of the Hungry Howie’s concept. Among his achievements: DeAngelis has opened more than 20 stores across Central Florida, introduced the Hungry Howie’s brand in California and Colorado, and invested in more than 60 additional locations nationwide.

Franchisee of the Year Award: Hungry Howie’s 2018 Franchisee of the Year award was presented to the Cross family. This North Carolina franchisee, owners since 2014, truly embodies Hungry Howie’s philosophy and core values, supporting the brand’s growth from their start. Cross family stores have flourished as consistent top performers for all KPI’s and Store Brand Awareness reviews.

Fawzi’s strong leadership, brand integrity, and unwavering support for his teams led him to remodel and upgrade the 18 stores he initially purchased throughout the state and open five additional locations in the area.

Marketer of the Year: Pat Patterson was named Marketer of the Year for a robust local marketing commitment to his Ludington and Clare, Michigan restaurants. Patterson’s successful integrated plan embraced print, digital, email and local store marketing, and enhanced by participating in local broadcasts and even marching in parades.  As part of Hungry Howie’s 2018 Love, Hope & Pizza breast cancer awareness campaign, he partnered with a local hospital to provide free pizzas to the staff reviewing mammograms.

Bolstered by the introduction of forward-thinking high-tech integrated systems, a new store design, and a vibrant franchise base, Hungry Howie’s continues to pursue steady expansion. The nationally recognized carry out and delivery pizza chain, founded in Michigan in 1973, has restaurants in 21 states, most recently opening the first Hungry Howie’s in Arkansas as part of a multi-unit development deal.

To discover your opportunity to be part of the Hungry Howie’s Pizza family, visit hungryhowies.com.

SPONSORED BY:
Hungry Howie's Pizza
Hungry Howie's is currently EXPANDING! Top Markets are available for single or multiple unit development. Get the EDGE over the competition with FLAVORED CRUST Pizza and find out about our franchise opportunities today. Learn More