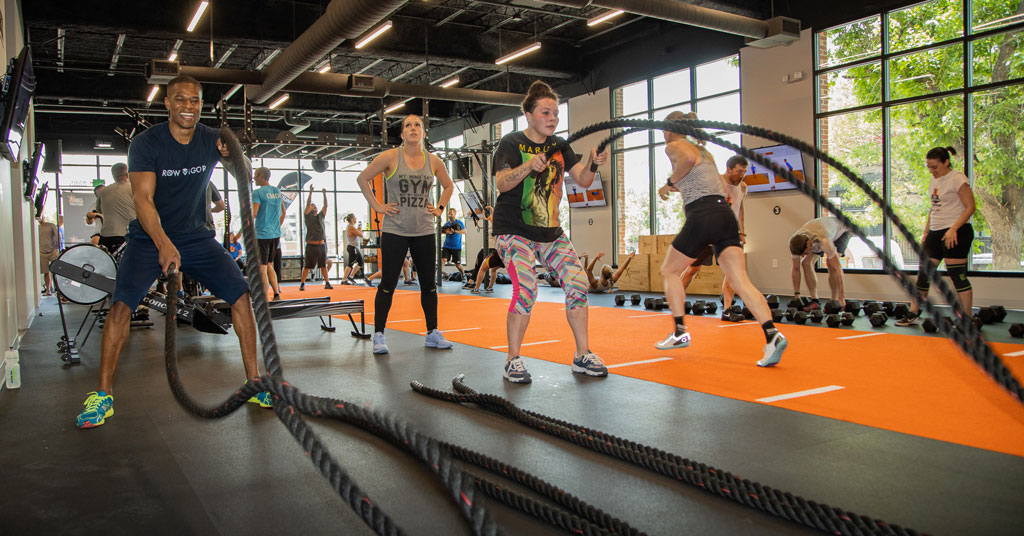 Before becoming CEO of Tough Mudder Bootcamp, Britt Canady spent 22 years in leveraged debt finance, 18 of them on the banking side helping middle-market companies grow, invest, and complete acquisitions. He spent his days evaluating company businesses and transactions – about 150 a year. “I was in the debt business, so for every opportunity presented, I also looked at testing the downside risk,” he says.

As he analyzed loan requests across many different industries, Canady found himself growing increasingly interested in the health care and fitness sectors, given its demographics and staying power. Health care was too regulated and he was confident that group fitness was more than a trend.

Over those years, he’d also identified 3 principles that pointed him toward franchising: 1) after the 2008 financial crisis, private equity was flush with cash and moving down market; 2) franchising was becoming the small-business norm for entrepreneurs seeking more control over their financial lives; and 3) much of retail was transitioning to e-commerce, spurred on by Amazon.

Digging deeper, he looked at different concepts within the fitness sector, from big boxes to smaller “boutique” studios. He was seeking a brand with room to grow, but the most successful concepts had already over-expanded in most of their territories, leaving little room for the best locations. “I wanted a concept that had evergreen room for franchisees to build scale, and I couldn’t do that with first movers,” he says.

He set his sights on finding an emerging brand in the group fitness segment with room to grow. He found what he was looking for in Tough Mudder Bootcamp: a high-end concept attracting the brightest talent, and franchisees looking to take advantage of the product and its brand power. “I liked the fact that Tough Mudder already was an international brand with a very large following,” he says. “I decided to take down the area in Charlotte in the fall of 2018.”

As his area development business began, Canady started meeting with Tough Mudder’s CEO, making the business case for splitting off the fitness studios from the events business. His idea not only was convincing, but when it came time to make the move, his investor group won the auction to buy the brand and continue its nationwide franchise expansion, and today’s Tough Mudder Bootcamp vision was born.

“When I took over in June last year, I had a tremendous interest in being a first mover of scale with this concept,” says Canady. He was not alone: “We launched an area rep program in the fall and immediately sold a 6-unit deal in Nashville. We attract single- and multi-unit buyers, but regardless of the approach, we value the business investor with the same vision of expansion in their markets.”

A logical question these days for anyone looking to invest in this sector is, “What about Covid-19 and the fitness brands filing for bankruptcy protection while others are shutting units nationwide?” There are several good answers, says Canady. Two of the most important are centered around 1) fitness technology and 2) changes in the commercial real estate market. In other words, quality and timing.

On the technology side, the IHRSA report noted that the top fitness trend in 2019 was in the category of fitness technology, where Tough Mudder Bootcamp already is out in front. “When people first come into one of our studios, they’re impressed with the look-and-feel of the infrastructure even before trying a workout,” Canady says. The studios offer centralized programming delivered from proprietary technology, streaming more than 900 movements to TV’s at 6 stations around the workout floor. The everyday workout variety is never repeated and impossible to duplicate, delivering 45-minute, full-body HIIT (high-intensity interval training) that can be found only at their locations.

Additionally, Covid-19 has shown the stickiness of studio fitness and value of technology. While all fitness was affected, boutique studios had the benefit of member loyalty attached to their coaches and community. This emphasized the value of technology and centralized programming that could stream offerings from coaches and clubs.

On the timing and real estate front, Canady points to the future of fitness and current situation of retail space. “If anything, this virus is going to increase awareness and reinforce the notion of health,” he says. “So if you believe in fitness, and that its popularity will be reinforced by this virus, by the time new franchisees open their studios demand should have exploded – both from pent-up demand and a growing demographic turning their attention to health.”

Fortunately, planning for the demand has never been better in location hunting. “There are deals out there and we are pushing for growth strategically during this time,” says Canady. “We are aggressively pursuing landlords who are struggling with SMBs and looking for well-capitalized tenants.” He sees a six- to nine-month window ahead where franchisees will have leverage over landlords in lease negotiations. “Retail is suffering, they need you,” he says, and are offering generous terms – for now. And for shopping center operators, he says, as retail anchors contract, fitness studios are growing – and they bring traffic. “If you believe in fitness and demographics, now is the time to invest.”

While sharing common roots and trade name with the Tough Mudder event brand, the fitness studios are completely separate. The relationship is mutually beneficial, however, providing unique opportunities to help studios grow, including marketing on-site at events and lead generation. Tough Mudder has more than 20 million impressions has enjoyed close to 5 million participants, and Canady pointed to a studio generating 800 leads in a single day at an event. “Tough Mudder is a tremendous company with a loyal base and massive awareness and, more importantly, shares the common vision of community and overall fitness.”

In addition to the business expertise Canady brings, the management team includes a 20-year marketing veteran; a CFO who joined from a Fortune 100 company; and most impressively the former head of fitness programming of one of the largest studio fitness companies in the world. “You’re not going to find a better, well-thought-out leadership team in an emerging concept,” says Canady.

The ideal franchisees, he says, are successful multi-unit franchisees looking to diversify – such as those in the hard-hit fast-casual and casual restaurant business – as well as anyone with proven business acumen, especially the fired and furloughed corporate executives and managers looking to build their own business and control their financial destiny. “I came into it as the person I’m looking for right now,” says Canady.

To sum up, he says, Tough Mudder Bootcamp offers investors the credibility of a nationally recognized brand with plenty of white space to grow; a strong, experienced management team; a membership-based concept with a loyal following; built-in lead generation through its sister brand; and ideal timing for great real estate deals.

The cost of a single franchise location ranges from approximately $283,000 to $400,000, depending on real estate and other local conditions, placing it on the lower end of the boutique fitness segment. To learn more or apply for a franchise, visit the Tough Mudder Bootcamp franchise website.