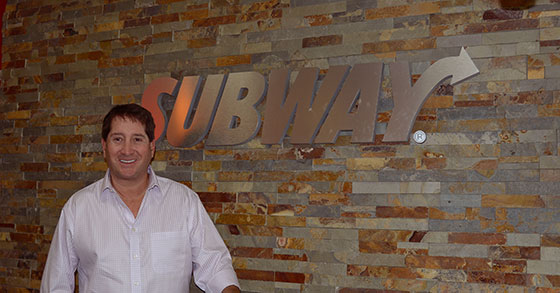 Steve Sager is a franchise veteran who has seen it all and successfully lived to tell about it. He's also a serial innovator and his ideas are quickly successful and scalable. For example, he championed Subway's innovative $5 footlong sandwich as a nationwide promotion and pioneered the brand's use of speedy ovens to offer customers toasted subs in a flash.

So when Sager says he sees financial promise in a new fast casual pizza franchise, you might want to listen. Sager, who owns 16 Subways in South Florida and 7 Auntie Anne's in Florida, Alabama, and Mississippi, is in on the ground floor of a development plan for Persona Neapolitan Pizzeria, a create-your-own, handcrafted pizza concept out of Santa Barbara.

At Subway, Sager opened 265 stores over the years as a development agent and has grown accustomed to fielding queries from franchising candidates seeking his funding and expertise. Still, Sager wasn't shopping for a new brand when he traveled to California to check out Persona, co-founded by classically trained chef Joe Baumel, the son of a family friend. The 30-year franchisee was intrigued by the idea of serving up a custom wood-fired pizza in 90 seconds. He inked Persona's first franchise development agreement--for 20 restaurants in South Florida that he plans to roll out over the next 3 to 5 years. The game changer, he says, was how good the pizza tasted.

"It wasn't in my mindset to grow another food company, but I found something that was unique enough that got me excited," says Sager, president of Boca Raton, Fla.-based Sager Management Group. "The reality is, to make money in the food business is not easy. You really have to have a brand that is going to cut through the clutter, and that is not always easy to do."

Sager knows what it takes to succeed in franchising. Thanks to "luck" and the financial backing of his father, who felt his son was suited to be his own boss, Sager was 25 when he opened his first Subway in 1985. In just four years, the pair would open 12 South Florida locations.

"Back then, it was unheard of to be a multi-unit franchisee that quickly," Sager says. "It just wasn't the kind of business people did. We just started expanding, and I really loved the business right away."

The folks at Subway noticed. Subway founder Fred DeLuca tapped the young entrepreneur to become a development agent to own and build the brand in a struggling territory in Northern New Jersey. He sold his rights in 1997 and moved back to Florida to launch an aggressive development plan for Subway at home.

From 1999 to 2011, the University of Florida graduate opened 135 stores, almost doubled average unit sales, and seized on a pricing idea backed by a catchy jingle that became a marketing darling. When a Subway with weak sales was returned to Sager's portfolio, he adopted and expanded on a $5 footlong idea that a Miami franchisee had used to boost sagging weekend sales. Sager still has the banner in his garage that touts $5 footlongs, all day, every day. Sales doubled the first day and then doubled again the first week of the promotion.

Sager implemented the idea throughout his 220 stores, boosting sales as much as 35 percent, compared with flat growth chain-wide. Within three months, the sandwich bargain was winning customers nationwide. "When something works like that and happens by synergy, it doesn't take much to make it go forward," Sager says.

In 2003, he had another idea to add to Subway's winning sales strategy when he spotted a giant oven promising hot pizza cooked in 1 minute being installed in a restaurant next to a Subway in a mall location. A year later, the TurboChef technology was adapted to deliver oven-toasted sandwiches in seconds in Sager's restaurants, and eventually throughout the Subway system.

"People literally have been in the room and said, 'Steve, our sales are flat. What is our next idea?'" he says laughing. "I would like to think that I am good at what I do because I enjoy it--and I understand operations and marketing. But if you have something that is so good, a lot of that is timing and luck."

Sager now hopes to turn his luck and knack for development and innovation to personalized pizza. In addition opening stores in Florida, he plans to add Persona locations in the Chicago area. He is also working closely with founders Baumel and fellow master pizza chef Glenn Cybulski to develop and enhance operational systems for franchisees. The company hopes to open 250 restaurants nationwide in the next 5 years. "My goal would be to never change the integrity of that product, never shortcut it," says Sager.

No matter where Sager's journey takes him, you can bet he will always be looking to change things up for the better. "We do things every day in our own stores that move the needle to create a better experience for our customers," Sager says. " In this business, it is never done. To be relevant you always have to willing to adapt."