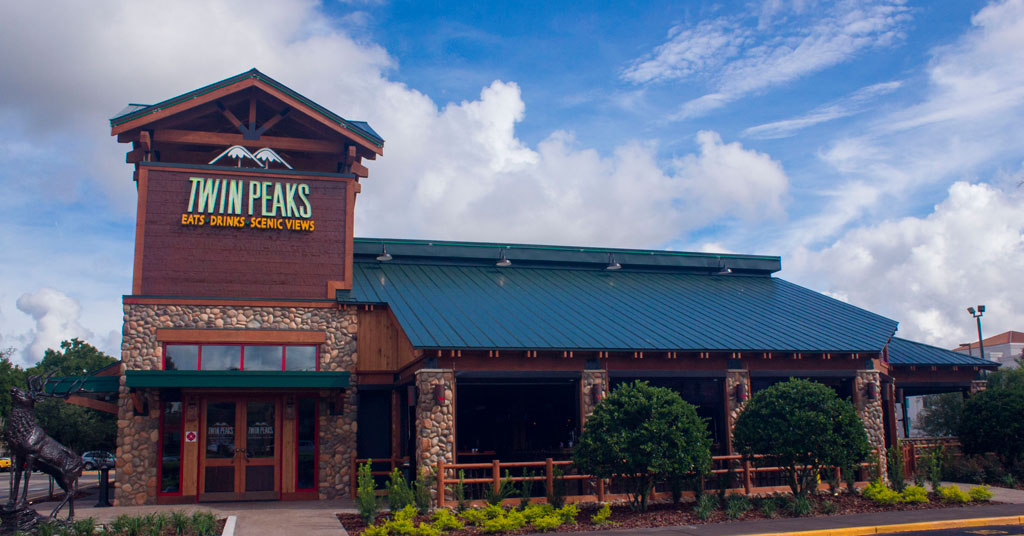 Whether you build from scratch or convert an existing location, Twin Peaks is the ultimate sports lodge concept that serves up a unique experience for customers while creating happy and successful franchisees.

The Texas-based chain has grown to more than 78 locations in 24 states, shaking up the casual dining industry with a concept that offers a unique local experience including local craft beer on tap and specials that cater to each location and local sports. Guests will always find primetime matchups, below freezing cold 29-degree beer, and hearty, made-to-order comfort food served up by all-female wait staff. The brand was even awarded the 2020 Zor Award for Best Sports Bar by Franchise Times.

Twin Peaks’ has created a successful conversion program that allowed numerous franchisees to join the brand by converting their existing restaurant locations into Twin Peaks. Most recently, franchisees in Altamonte Springs, Florida and Knoxville, Tennessee have done just that with remarkable results.

“An overwhelming number of our locations are successful conversions,” says Joe Hummel, CEO for Twin Peaks.

He says the program works well for second generation restaurant locations along major roadways within heavily traveled retail corridors. The areas should also have populations of more than 150,000 and average household income of at least $60,000, among several other factors.

Other franchisees have built their own locations.

Successful multi-unit operator Fred Burgess stumbled upon Twin Peaks when he saw an episode of “Undercover Boss” highlighting the concept back in 2013. It piqued his interest so he looked into the brand.

Burgess had no prior franchising experience when he and his partner signed on to open their first restaurant. But he had figured out that the alcohol sales component was profitable, the unit economics were good, and he loved the idea of bringing a ski lodge atmosphere to South Florida.

They opened their first location in the Sunshine State in 2015 and have gone on to open 3 more restaurants with two more under construction. It’s been a good match for Burgess who now has the first, second, and third-best performing stores in the chain.

“I learned that a successful restaurant was not just about how the food tastes, it’s about delivering an experience that you can’t get at home,” said Burgess. “I was talking to my partner Jack and said, ‘How cool is it to build essentially a ski lodge in South Florida that’s flat as a pancake and hot?’”

Across the country in Arizona, Carolyn Vengelos arrived at Twin Peaks from a different path. She had worked with California Pizza Kitchens and Buffalo Wild Wings and understood the benefits of the franchising business model.

She says she and her husband wanted to become franchisees but weren’t sure which brand was right for them. But when they met a Twin Peaks sales rep at a conference in 2012 it began to become clear. A year later they opened their first Twin Peaks location, then a second, after the company sold them a Scottsdale store in 2016. They now have a fourth under construction set to open this year and they’re already plotting stores five and six.

Vangelos says the corporate office at Twin Peaks has provided outstanding training and marketing along the way.

“We thought about doing a breakfast concept, a café concept, and we kept getting drawn back to the fact that Twin Peaks is a sports bar,” Vangelos said. “There’s just something very special about it, and I still believe it to this day.”

To discover more about franchising opportunities with the ultimate sports lodge visit twinpeaksfranchise.com or call 972-941-3160.

SPONSORED BY:
Twin Peaks
At Twin Peaks, expect to enjoy scratch-made food, sports on TVs from every angle, frosty 29° beers, and the fun and friendly Twin Peaks Girls. Twin Peaks is the Ultimate Sports Lodge and your gameday destination to watch football, basketball... Learn More