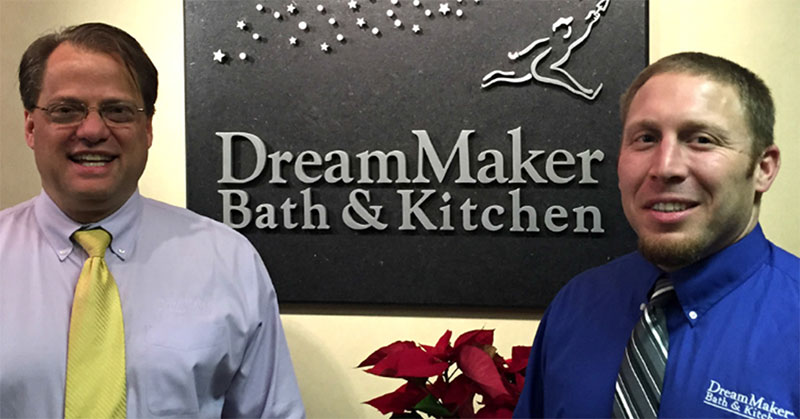 The DreamMaker Bath & Kitchen remodeling franchise has just added two new franchisees to its roster. Jay Nutting and Michael Pinkerton completed their training at the Waco, Texas, headquarters in December and are taking over their new territories.

Nutting's franchise is in Kenosha, Wisconsin, and will be known as DreamMaker Bath & Kitchen of the Southern Lakes. Meanwhile Pinkerton purchased the Colorado Springs, Colorado, franchise from Mark and Deb Witte.

The two new franchisees are the first since the brand launched "major system improvements with our franchise marketing support, EMT2, expanded coaching department and updated sales and productions system," according to a company statement.

Nutting is a Wisconsin native with a corporate America background. He says his entrepreneurial spirit, love for his family, and the passion for building things and deciphering how things work led him to make the move to franchising.

"DreamMaker has allowed me to work hard achieving my customers' dreams, but also come home at night and cherish the time with my beautiful family," says Nutting.

That family includes his wife, Stacey, and son, Logan.

Nutting spent more than a decade as an engineering manager in the automotive industry. During his time in that industry, he was a co-owner of a remodeling company.

His primary territory covers Kenosha County and the cities of Racine, Burlington, and Lake Geneva.

Michael Pinkerton says he knew he liked building things when he took building trade classes in high school. He also worked at a lumber yard all through his high school years. That early exposure helped prepare him for becoming a franchisee of DreamMaker Bath & Kitchen.

Before taking over his franchise from the Wittes, Pinkerton owned and operated Pinkerton Homes in Colorado Springs. He was drawn to DreamMaker through a corporate recruiting campaign in 2013. It would be fall 2015 before details were worked out, and he came to orientation and training.

He and his wife, Andrea "Angie" have lived in nearby Monument for more than 20 years. They have six children: Jen, Amber, Ryan, Daisy, Noah, and Malachi.

"What I love is so many of my customers have become lifelong friends and that makes the job a lot better knowing you are making someone's life better and you're becoming a friend of theirs, someone you don't mind seeing in the grocery store," he says. "You're building relationships."