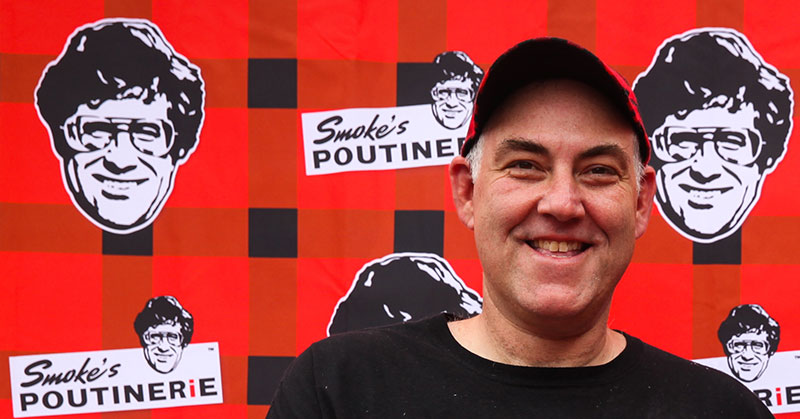 Alan Goldstein opened his first Smoke's Poutinerie with a bang in Hollywood, California earlier this year. He has a deal to open 20 locations over the next five years and the next one is weeks away from launching in San Diego.

The 45-year-old Goldstein is relatively new to franchising but has jumped in headfirst. He says he loves the concept of Smoke's Poutinerie, the wildly entertaining poutine concept from Canada, and is excited to be a part of its rapid expansion in the United States. His Hollywood location is just the second store in the U.S.

Goldstein says he's currently smack in the middle of operations and working "about 100 hours a week" alongside his crew. But his goal is to get to the point where he can focus more on strategic growth, development, and openings.

Key accomplishments:
One of my biggest accomplishments to date has been the high profile opening the first Smoke's in Hollywood, which was the second unit for the brand in the United States. (There are approximately 100 locations in Canada.)

How do you spend a typical day?
I am working side-by-side with my staff since we are in the beginning stages of our restaurant. As my staff becomes more confident and comfortable, I will be able to focus more on strategic growth, development, and openings.

What's your passion in business?
My passion is to make something that will grow - to build something that's lasting and permanent to the market. The founder and CEO of Smoke's Poutinerie, Ryan Smolkin, refers to the brand's growth strategy as the 'Global Domination' strategy. That's what I would like to achieve in Southern California.

Business philosophy:
There's always something else to learn. Try to listen to everyone you can to make your best judgment.

Management method or style:
My job is to get my staff to feel as passionate about growing the business as I do. I try to lead by example. I am a manager and a cheerleader. I want them to feel the enthusiasm and motivation that I embody every day.

Greatest challenge:
Learning to trust my staff to do what they're trained to handle. Learning to let go is a challenge.

How close are you to operations?
I'm immersed in operations since we have recently opened our Hollywood location.

How do you deal with problem employees?
It depends on the problem and the employee. Early on, I try to give people a second chance. You always have to play it case-by-case. When there's a problem, I step in to handle it.

2015 goals:
I am planning to open a second store in San Diego by the end of the year and I am starting to look for other locations. My territory is from Santa Barbara to the Mexican border, which encompasses nearly 20 million people. There are so many options for expansion sites.

2016 goals:
My goal in 2016 is to open three additional stores, find a director of operations, and to expand our internal management team. I am working on developing and fine-tuning my system so I can focus more on development and growth.

Growth meter:
Aside from sales numbers, I look at social media figures and PR value. I compare it from week to week. When I first started our Instagram, we would get five likes and now we'll get 40-50 likes on any given post. Word of mouth is also a good barometer.

Vision meter: Where do you want to be in 5 years? 10 years?
In 10 years, I don't know if I'll be running the day-to-day operations. I'm hoping to have 40-50 areas. I am interested in spreading to other areas.

Where do you find capital for expansion?
I have been very fortunate to work with friends, family, and people interested in the brand who have tried it elsewhere. My first couple of stores are 100 percent equity investors. My business plan is that I'll make money on the next 25 stores. My investors are my main priority.

What are you doing to take care of your employees?
I show my support and appreciation to my employees through promotions, bonuses, and offering them extra hours. I am also considering profit sharing down the road. Smoke's Poutinerie is such a draw to my staff that half of them come back on their days off to hang out.

Driving by Data - Manage with Metrics for Recruitment Success
How Covid-19 Proved the Strength of Christian Brothers Automotive's...
Sponsored
Huckleberry's Breakfast & Lunch Ready to Dish Out Hearty Franchise...
Strategic Planning Is The Compass For Your Business
NPC International's Restructuring Offers Leases For 163 Pizza Hut Sites In...
Navigating a Reopening Plan in the Wake of Covid-19

Ziggi's Coffee
There's nothing quite like the perfect cup of coffee. It wakes you up and gets you on the right path. Now, you've got the chance to build a lifestyle...
Cash Required:
$100,000
Request Info
Added
Learn More
Hungry Howie's Pizza
Hungry Howie's is currently EXPANDING! Top Markets are available for single or multiple unit development. Get the EDGE over the competition with...
Cash Required:
$100,000
Request Info
Added
Learn More
Share This Page