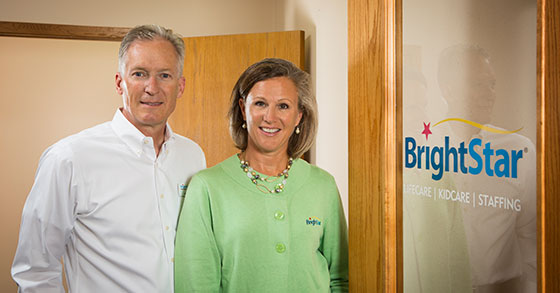 Jeff Tews and Susan Rather first met on a Multiple Sclerosis charity cycling ride. They immediately hit it off. Marriage came next and the couple had only been married for about a year when they entered a new venture as franchisees in the home care field. Together they own five BrightStar Care locations through their Madison, Wisc.-based company, which consistently performs at the top of the brand's franchise chain.

"We knew we had great communication, but we sure didn't want to mess anything up," says Rather. "We went in with eyes wide open. The advice we got from other couples was to clearly define who is going to do what. Over the years, we have melded that a bit."

Tews, after 33 years in the banking and telecom industries, was seeking a change of pace from the corporate world. Rather, a medical technologist and lab manager at the local Veterans Administration hospital, wasn't looking for a new job when she accompanied him on a 2006 discovery trip to BrightStar headquarters in Gurnee, Ill. As they began to study the BrightStar franchise model, which called for hiring a branch manager with skills that matched her own, her mindset began to change. On the drive home from their second trip to Gurnee, they decided to launch the business together.

Thanks to their passion for the home care business, the future looks bright for the couple--who expect to be the first franchisee of the new BrightStar Senior Living concept when the company begins franchising its assisted living and memory care facilities.

"It is a great opportunity to be able to have that continuous living option available for our families and our clients when they can no longer stay at home," says Tews. No matter how their next chapter unfolds, you can bet the journey will be taken together.