David Gronewoller On His People-Centered Formula 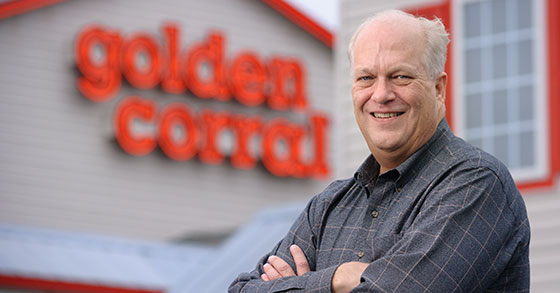 David Gronewoller is president of GC Partners, a Winston-Salem-based company that operates 12 Golden Corral locations in North Carolina, South Carolina, and Florida. You might consider him an employees' employer. With more than 20 years of franchise experience, he believes "more in the man than the method" in overseeing his family-style restaurants. This people-centered formula for success has spilled over into the neighborhoods his restaurants serve.

Gronewoller's commitment to the community is far-reaching: in 2013, his restaurants served and delivered 1.1 million fresh meals to senior citizens in five counties. It's also personal: when his mother was battling pancreatic cancer under home hospice care, Meals on Wheels delivered food to the family's Colorado home. His mother signed on for the service as a paid participant to ensure that her husband would eat at least one nutritious meal a day after she was gone. But when Gronewoller came to visit, he noticed his father threw out most of the delivered meals because it "looked horrible, was way overcooked, and smelled worse."

When the opportunity arose to bid to be a meal provider in his own community, Gronewoller knew he could do better. He estimates the program, which provides fresh, high-quality prepared, packaged and delivered meals priced below the company's cost, loses $150,000 to $180,000 annually--a negative financial proposition that is winning the hearts of those it serves. Because of the reduced price, the county's senior services organization has been able to provide as many as 36,000 additional meals, reaching up to 7,200 more elderly residents each year than the previous provider had.

Gronewoller says the company's community projects aren't done for recognition. In fact, he says, he didn't even realize the impact the effort has until he delivered meals himself. The real value to the community, he says, is the connection the volunteers make with those who open their doors.

"The biggest thing is not providing them with nutritious food, it's that somebody sees them and says 'Hi' every day. That is the important thing," he says. "They smile and they're glad to see you. You acknowledge that they are a human being. It makes you want to cry.

Gronewoller, former chair and board member of the North Carolina Restaurant & Lodging Association and 2004 recipient of its Restaurateur of the Year award, takes the same thoughtful approach in his restaurant operations. His goal is to hire the best general managers, pay them what they are worth, and let them do their jobs.

"I believe that in any successful restaurant or business, the decisions are made as close to the customer as possible," he says. "I have to have the best people, and train those individuals so they have an awful lot of autonomy. I can't work for someone looking over my shoulder telling me what to do."

His foray into the restaurant industry began like many--out of necessity. Gronewoller, whose father was an economics professor and mother a librarian, dropped out of college in Colorado at age 19, "before I got kicked out," he says. "I wasn't a bad student. I just couldn't sit in a classroom."

In need of a job, he washed dishes at a Sambo's restaurant, only to discover he actually enjoyed the ritual and liked things "spotless, organized, and in place." Soon he was working long days, jumping from his early morning dishwasher shift to the cook line to learn the restaurant business. Nine months later he was in management training and the start of a career that would ultimately--with a few address changes across the U.S.--lead him to operations within Golden Corral and his first franchise in 1993.

Today Gronewoller projects continued growth with construction for Golden Corral locations in Miami and Hialeah, Fla., scheduled for the first quarter of 2015, and he has several more deals in the works. Yet it is the lessons learned in those early years that he still keeps in mind as a multi-unit operator. "The one thing I learned from those days is the basics. We would have problems come when I would fluctuate from the simple basics. If I went back to the basics, those problems went away," he says. "Don't overanalyze it. Keep it simple."

Yes, Franchising Is for the Young!
Site Selection: Other Factors To Consider
Sponsored
Shipley Do-Nuts Brews Up Big, Bold Moves to Drive Franchisee Success and...
Space Is the Place: Breaking Ground is Hard to Do in 2017
Do Your Managers and Employees Love Their Jobs?
Supply Chain Management as a Franchise Sales Tool