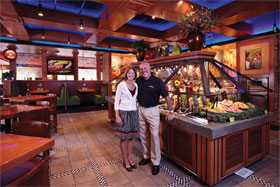 As multi-unit franchisees with 24 Sizzler restaurants, Gary and Sally Myers spend a lot of time together at work, where he is president and CEO of their Temecula, Calif.-based company, and she is vice president of marketing.

And after working together for more than 25 years and being married nearly 34, the energetic couple still jokes about the "sizzling" romance they started in high school. Gary, a business major, proposed three times during their college years--the final time in front of her fellow cheerleaders at Pepperdine University. Sally, who majored in marketing and communications, accepted as soon as they graduated. "Let's just say I'm known as persistent and consistent," he says.

Gary, who put himself through school by moving up through the ranks of the Market Basket grocery store chain, had benefited for years from the tutelage of his father-in-law, Jack Williams, a veteran Sizzler franchisee. When Williams offered him a position as director of training with his company, Forbco Management, he accepted and set out to learn more about franchising and restaurants. Sally turned her hand to developing marketing and advertising programs for the company.

The couple, who worked for Forbco for six years after their marriage and through the opening of 36 units in Southern California, don't believe they could have had a better teacher. "He's so passionate about his work and such a talented entrepreneur," Gary says. "He taught me all about what to do and what not to do in the restaurant business: how to formulate a company, take care of your people, and hire a great attorney, accountant, and banker. And he's really been a leader among Sizzler franchisees."

By the early 1980s, the couple, who'd found to their delight that they enjoyed working together, were ready to start their own company. They became partners with John Burk, a general contractor who'd built some of the Forbco Sizzlers, and with Williams, who would operate as a silent partner, forming BMW Management Inc. "I talked to the president of Sizzler USA and he approved our five-store, five-year development agreement," says Gary.

Their idea was to take Sizzlers to areas that really needed restaurants. In 1983, they opened their first in Temecula, Calif., where they would move one year later. "We had lines out the door. There were cowboys coming out of the hills on horses, so we had to have a tie-up for the horses," Gary recalls. "People there just fell in love with Sizzler but they got tired of standing in line. One regular customer said, 'If you'll build another one in Moreno Valley, I'll give you the property and $750,000 for the building.' It turns out that the property he offered was exactly where I wanted to build." BMW opened that location in 1985.

2011 Multi-Unit Franchisee Magazine MVP Award winners, the couple currently are revamping their 24 Sizzlers into what they call the "new-generation Sizzler." Though their three children are now grown, family, complete with grandchildren, is still a priority with the busy couple.

"Juggling is something we still do. It's not easy and there were times we had to sacrifice our own sleep and interests to maintain a positive, loving, thriving family and to be there for the business and staff," says Sally, who points to the family camping vacations as a highlight of every year. "But it's all been worth it. We are very blessed."