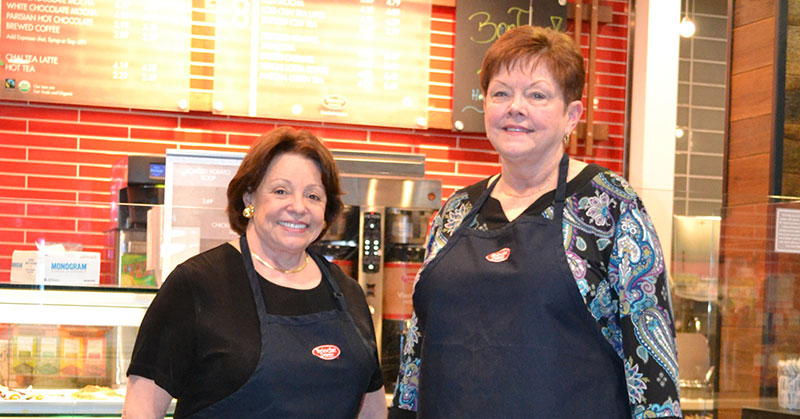 Judy Ewing-Lonetti and Sandy Dunn have known each other for three decades. They went from being friends to being franchising partners and, they say, they couldn't have done it without each other.

"We both know, that the other one does, what they do, better," says Ewing-Lonetti, chief executive officer of Charlotte, North Carolina-based Ewing-Dunn.

Franchisees seeking insight to business success with a partner would be wise to look at Ewing-Lonetti and Dunn. Mutual respect is the cornerstone of their 30-year relationship.

In the coming months, the company will add an Auntie Anne's and at least one additional food franchise when construction is complete on a new concourse at the airport, which set an all-time passenger record in 2014, with more than 44.3 million travelers.

The pair met at a gift show 35 years ago when Ewing-Lonetti, as national sales director for a large gift company, was selling and Dunn, general manager at Charlotte Douglas for Dobbs House Inc., was buying. Five years later, their complementary expertise, and Dunn's proven airport experience, would help them land a successful bid for their first airport store. Their strong wholesale and retail backgrounds made the women a perfect fit to incorporate, but it was their special friendship, formed through business, that truly led to the turning point in their careers.

Ewing-Lonetti was simply supporting her friend in need, when the pair met for lunch decades ago to talk about Dunn's career options. Dobbs House had just lost the bid to HMSHost and Dunn, divorced and a single mother, was mulling over her next move, including out of state to work for the concession operator at another airport.

"I told Judy, 'If I had any sense, I would probably propose on an ice cream parlor at the airport myself, because it was a good location," remembers Dunn, Ewing-Dunn vice president, in charge of daily operations. "About 30 minutes later, Judy said, "why don't we do it."

When the business came up for bid three weeks later, the duo formed Ewing-Dunn, which would evolve over the years to include gift stores and their first food franchise 21 years ago.

"I worked through high school and college and my brain, my way of thinking, has always been business oriented," says Ewing-Lonetti. "I loved the airport business, so it was particularly intriguing to me to form a partnership with Sandy that would be our own entity."

At the time, the pair didn't think too much about what the future might hold they were just trying to launch a business.

"I guess you are optimistic and always hope it will be a long-lasting partnership. But we were too busy, to worry, too much, about that at the time," says Dunn.

These days, the pair focuses their attention on meeting the ever-changing needs of the traveling public and growth opportunities at one of the world's busiest airports, where a 20-year expansion plan was recently announced. With all their brands under one roof, they take advantage of intelligence garnered from two sources: the brands, who know what their customers want; and constant survey data compiled by HMSHost to identify who is traveling through the Charlotte airport and what they are looking for in an airport store.

Both women say they are proud of the strong relationships they have created with franchises -even when a store hasn't worked out.

"They understand it's just business and they have to get their act together and make serious changes if they want to stay at the airport," says Ewing-Lonneti. "They get pushed, because we get pushed. Our city wants our airport to be the very best airport there is and it is up to Sandy and me to do our part to ensure that everything looks great and is new and fresh."

Time has only enriched their business partnership and deepened the relationship that goes beyond friendship. Since the lunch date when the idea for Ewing-Dunn was born, they have had each other's back through thick and thin - the death of Ewing-Lonneti's first husband, a serious health issue with Dunn's son, the marriages of their children, Ewing-Lonneti's remarriage - and grandkids.

"I don't think we would have gone into the venture if we didn't think we could make it work," says Dunn. "I think it has succeeded because we both have the same work ethic and vision of what we wanted to accomplish. It didn't hurt that we were friends before we were business partners."

Yes, Franchising Is for the Young!
Site Selection: Other Factors To Consider
Sponsored
PEOs Bring Value After Natural Disasters & Crises
Space Is the Place: Breaking Ground is Hard to Do in 2017
Do Your Managers and Employees Love Their Jobs?
Supply Chain Management as a Franchise Sales Tool

Premier Martial Arts
Premier Martial Arts is excited to help entrepreneurs with a passion for martial arts become a meaningful part of their community.
Cash Required:
$100,000
Request Info
Added
Learn More
The Habit Burger Grill
The Habit Burger Grill comes equipped with its unique flavor created by chargrilling over an open flame and a diversified menu which appeals to a...
Request Info
Added
Learn More
Share This Page