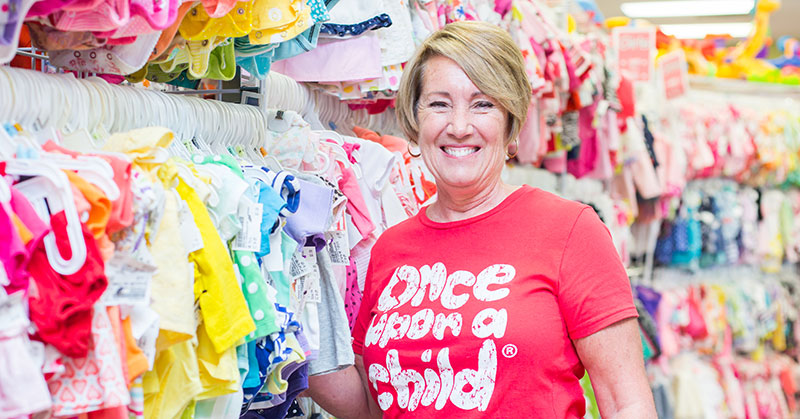 Becky Finger was nearing 40 and busy raising three kids when she and a friend first visited a Once Upon A Time franchise location in Columbus, Ohio, two hours away from her home in Cincinnati. She had seen franchise founder Lynn Blum on the cover of Entrepreneur magazine in 1992 and thought her concept was brilliant.

"Lynn has such a passion for resale and for recycling, which you didn't hear as much about 25 years ago," says Finger, now 64 and the owner of nine Once Upon A Child and seven Plato's Closet stores. "Recycling clothes is what she was doing, and that was an added bonus to me."

Finger, who had never run a business, was smitten as soon as she visited the Columbus store. "I liked it because it was clean, organized, and bright. It smelled fresh, everything was gently used, there was a great variety of brands, and it was a family operation, which appealed to me," she says. "I liked the idea of franchising and having a proven model so I didn't have to figure everything out. I'm pretty black-and-white with things. It would have been reinventing the wheel for me to open 'Becky's Used Clothes.' I knew I just had to follow in Lynn's footsteps. Of course I learned a lot along the way and developed my own style."

She and her partner bought the entire Cincinnati-Dayton territory, and she's never regretted it. Their only competition then was Children's Orchard and small mom-and-pop stores.

Finger soon brought her entire family into the growing business. "My family was supportive. When I started, my son was in kindergarten and my girls were in 7th and 9th grade--at three different schools. It was a major turning point in their lives. We'd bring in baskets of clothes from my old station wagon and tag them at home. Looking back, it was a crazy time," she recalls. "All three worked in the store, and my husband was also all in. I had great people working for me, too. My most successful employees were customers who believed in the concept."

In retrospect, she says that being a "people person" and an organized, hard worker qualified her for her new life as a multi-unit franchisee; and later, as a multi-brand owner when she took on Blum's newer brand, Plato's Closet.

"I earned my degree in home economics (that's when they still had such a thing) at Ohio University and thought I'd be a mom. I didn't think I'd be an entrepreneur, but I slowly grew into it," she says. "I'm a people person, and I find I'm an HR person more than anything else. When I started I had 7 employees, now I have 35. Earlier, our stores would do maybe $300,000; now they're doing $1.5 million or more."

Contributing to her success, she believes, is the fact that her stores are in nice strip centers in neighborhood communities, have big bright, wide aisles, a public bathroom, a playroom for children, and are open full-time hours "like a real store," she says. "The big difference between us and consignment stores is that we pay our customers for their gently used clothes."

When Blum started Plato's Closet for teens 15 years ago, Finger wasn't sure it was a good idea. "I thought, what teen wants to wear used clothes? Boy, was I wrong. I went into my daughters' bedroom one day, and they were trying on their friends' dresses to wear to the prom. So I jumped into Plato's Closet too."

At the time, Abercrombie & Fitch was at the peak of its popularity, "and we hung our hat on tons of it," Finger says. "The trends are always changing, though, which is why we hire teens and 20s because they know what's in style and what will sell."

Today, two of Finger's children are taking on the day-to-day operations of her 16 stores, all located within an hour's drive. "Kate, my oldest, is running the stores and I'm more of an advisor. We work well together. She's been doing this since she was 14, and she's also a people person who is very good with the staff," she says. "My son Christopher takes care of all 16 stores and our warehouse. There's always a roof leak, a computer down, a door that won't lock. He does all that, as well as transferring merchandise, handling lease negotiations, and remodeling our stores with my husband."

Stepping back a bit, Finger admits she's glad not to cringe every time the phone rings with a "So-and-so didn't show up today" or "The air conditioning isn't working." But she doesn't really see retirement in her immediate future. "I still work every day. I get lots of emails since everyone reports to me daily. I have a passion for the business. It would be hard not to be involved. I visit every store once a month or two, but I'm more of a cheerleader now."

Eager to stay on top of shopping trends, Finger, who is pleased with the support she gets from franchisor Winmark Corp., says she and her team keep an eye on Internet sales. "We wonder sometimes if people will keep going to brick-and-mortar stores. But then people today are so aware of the environment, recycling is definitely here to stay. And most still want to see, feel, and touch what they buy. This is a good business. Our sales are still increasing after all these years."