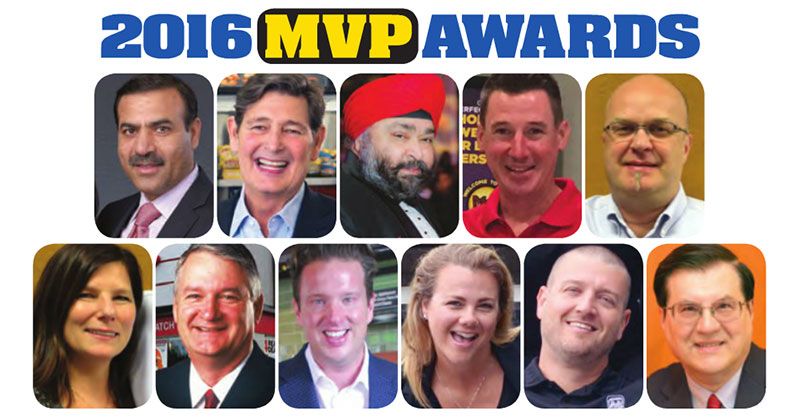 Franchisees work hard, provide jobs, help their communities, and inspire countless others to follow in the footsteps of their well-earned success. That's why we recognize the best of them each year with our Most Valuable Performer (MVP) Awards. Ten qualifying franchisees were chosen from a worthy group of their peers and honored at this year's Multi-Unit Franchising Conference at Caesars Palace in Las Vegas.

Choosing MVPs is a lengthy, arduous process--also incredibly rewarding as we learn more about the lives and achievements of the many candidates. To qualify, franchisees must have at least five operating units and have been in a franchise system for a minimum of two years. This year's winners are power players, innovators, and creative thinkers with big hearts who genuinely care for both their employees and their communities and are working to make the world a better place.

During the conference, before a general session filled with hundreds of their peers, each MVP took the stage to receive a plaque commemorating their achievements. The presentation was sponsored by Church's Chicken. Congratulations to these franchise operators who exemplify the best of what franchising has to offer.

Ali Butt is president of AR Group of Restaurants, which operates 25 Popeyes locations in 5 states. The Pakistani-born franchisee and his wife Arian Rahmani are a classic example of the American Dream. He recalls working 18 to 20 hours a day in the beginning and is proud to have achieved success and provided opportunity for his employees. His growth plan for the next decade is to add more than 100 locations.

Adam Saxton is chief business officer and co-owner of The Saxton Group, founded by his father Kelly Saxton. The company operates 67 McAlister's Delis, with another 10 in the pipeline. This family-run business has always been active in its communities and hosts weekly fundraisers at all its locations. Last December, when a tornado struck a Dallas suburb near one of their stores, the manager provided free meals and shelter to first responders.

Brooke and Les Wilson opened their first franchise location as newlyweds in 2004. Today they operate 5 Two Men and A Truck territories in North Carolina and Georgia. They've learned to blend their personal and professional lives to achieve a balanced life. Their well-defined boundaries and responsibilities, hard work, and sense of fun have helped them build a successful franchise business together.

Michael Geiger
is president of Big Plan Group, which operates 7 Moe's Southwest Grills in the Pittsburgh area. He and his partner John Iaquinta are passionate about creating innovative ways to build their business. From Free Queso Day promotions to unique mobile loyalty program ideas, the company is opposed to "allowing complacency in operations," he says, and plans to saturate the Pittsburgh market with Moe's in the next 5 years.

Todd and Kelly Mulvahill, operators of 6 Papa Murphy's Pizza stores, recently signed on as the pioneer franchisees of The Gyro Shack to develop 14 stores in the Seattle area. They have long been passionate about helping their community, especially children. Longtime supporters of St. Jude's Children's Research Hospital, they also work actively on programs that benefit the local partner hospitals of Starlight Children's Foundation.

Ed Wolak is the founder and CEO of The Wolak Group, which operates 96 Dunkin' Donuts stores in Maine, New Hampshire, and New York. With the brand for 42 years, he's looking to open his 100th location in the next 12 months. He has served as a leader at every level of the brand's advisory system and has been honored nationally for retail excellence and as developer of the year. If Dunkin' Donuts is pondering a new product, it's likely made a test run in his organization.

Dan Ponder is president of Ponder Enterprises, which operates 36 Hardee's in Alabama, Florida, and Georgia. He's based in Donalsonville, Ga., pop. 3,000, but don't let that fool you: Ponder publishes the local newspaper, is the mayor, and is leading an effort to make his town the nation's first Smart Rural City.

Fred Howard is principal of Fresno-based F&M Rally's, which operates 11 Rally's locations. The military veteran, who opened his first Rally's in 1992, was recognized for outstanding performance and leadership. He previously was named Rally's Franchisee of the Year three times. (Editor's note: Howard was unavailable for a profile.)