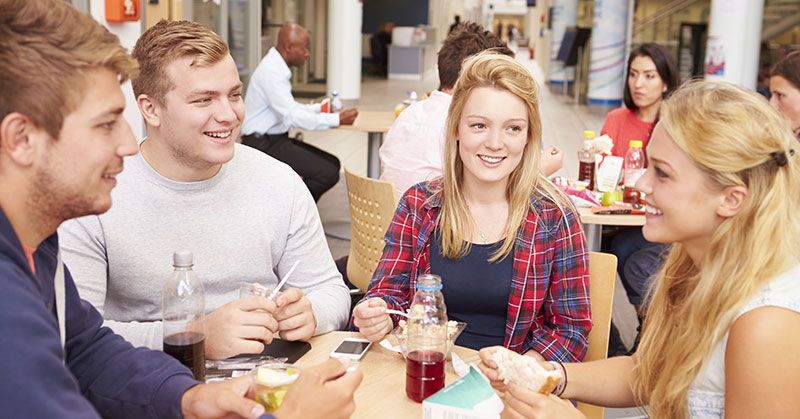 A new study finds that college students are no longer satisfied with eating cheap food on the go. These kids were raised on well-prepared foods with a variety of cultural influences and trained to seek deals given economic uncertainty. Today's campus consumers expect more from quick-service restaurants (QSRs), according to the findings of a new survey from leading college marketing and insights agency Fluent.

"The next wave of consumers starts with a higher set of expectations for engagement than past generations: food that is tasty yet affordable, made with quality ingredients, and a social environment," says Fluent EVP Michael Carey. "In changing strategies over the past few years, QSRs set a new bar for themselves. Even a quick meal is an opportunity to relax, gather, engage or find quiet time, and enjoy. 'QSR' is a far more accurate label for what this demographic is looking for than 'fast food'."

It All Adds Up: How Much They Spend, How Often

As expected, college students limit their spending per visit, but their visits are frequent with most eating out multiple times per week. Respondents were asked specifically about going out to eat and about meals rather than about visits that might be interpreted as only for beverages.

More Than Fast Food: The Experience

Quick-service restaurants increasingly present themselves as gathering places, and those efforts have been rewarded. After all, students have dozens of options, with 65% choosing to eat on-campus the majority of the time, 22% eating off-campus most of the time, and the rest eating on or off-campus about the same amount of time.

The Bottom Line: The Must-Haves

College students aren't particularly fussy, but they will not compromise on the big three factors: taste, price, and quality. Per a weighted scale where 2.0 was very important and -2.0 not important, the first two qualities rated above 1.5.

The survey was conducted July 20 - 26, 2016 and polled 1,142 students from across the country. 65% were female, and 81% were between the ages of 18 and 21. 50% lived off campus during the past school year, and 70% said they spend most of their time where they live, followed by on-campus locations, followed by at friends' and family homes.

How Franchisee Peer Groups Can Increase Franchisee Engagement & Performance
From the Floor Up: A journey of service, quality, and success
Sponsored
Dogdrop Shines as Unique Franchise for the Future
Survey Finds Employee Turnover Creating More Problems
Is It Time to Embrace a Digital Detox?
From Father to Sons: Building a business for the next generation

Nautical Bowls
At Nautical Bowls, we combine healthy, fresh superfood bowls with an uplifting atmosphere, giving you energy to life a full life! Our goal is to...
Cash Required:
$100,000
Learn More
MY SALON Suite
With more than 250 locations (and more on the way!), MY SALON Suite is the #1 salon suites franchise opportunity in North America.
Cash Required:
$500,000
Request Info
Added
Learn More
Share This Page