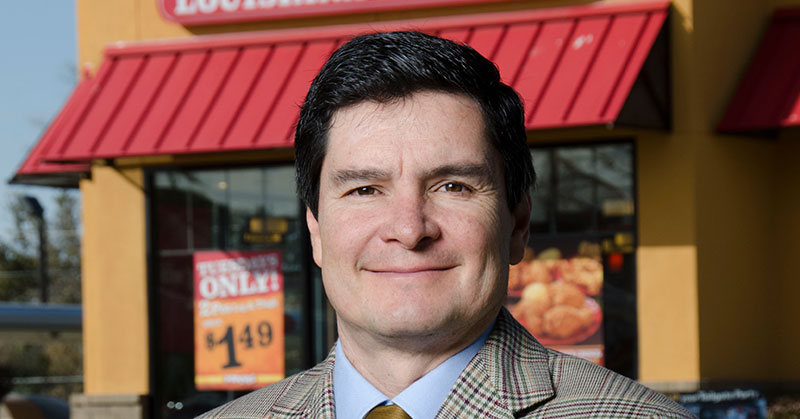 Guillermo Perales, the largest Latino franchise operator in the U.S., has been tapped to head up the 2017 Multi-Unit Franchising Conference. He'll serve as chair for franchising's premier event for multi-unit franchisees, franchisors, and suppliers. The conference will be held April 23-26, 2017 at Caesars Palace in Las Vegas.

Perales is the founder and CEO of Sun Holdings, which operates more than 700 restaurant and retail units across 8 states. His brands include Burger King, Popeyes Louisiana Kitchen, Arby's, Golden Corral, Krispy Kreme, Cicis, GNC, and T-Mobile. He takes the helm from last year's chair, Michael Kulp, president of KBP Foods, operator of more than 350 restaurants in 14 states.

Perales is no stranger to franchising or leadership. He became a franchisee in 1997 with a single Golden Corral and has been on the growth fast track ever since, primarily in Texas and Florida. Today he is the largest Latino franchise operator in the U.S., and one of the 10 largest franchisees in the country. Rapid growth and a dedication to a tightly run operation have led to a successful franchising career for Perales, who is active in his community through several philanthropic endeavors. He also offers numerous educational and career advancement opportunities to Sun Holdings' more than 14,000 employees.

"In spite of today's overreaching government regulations--minimum wage, joint employer, healthcare, unionization, and more--franchising is still the best way to fulfill the American dream of business ownership," Perales says. "Despite these external threats, franchising will continue to adapt, as it always has. We will go forward and grow, provide jobs and training, serve consumer needs, and continue our contributions to the economy and the communities we serve.

"Personally, I am looking at new franchise opportunities to continue the growth of my company," he adds. "The upcoming conference will provide multi-unit franchisees with the content, insights, and best practices they need to adapt and grow in the current environment."

"We are excited to have an industry rock star like Guillermo serve as the chair of next year's Multi-Unit Franchising Conference," says Franchise Update Media CEO Therese Thilgen. "His unique perspective, experience, life story, and insights add an even deeper element to an already outstanding event."

Perales is playing an active role in planning and directing the content, sessions, and speaker selection. "It's important for this conference to remain topical and relevant by presenting the best panelists, educational sessions, networking, and deal-making opportunities, whether a new multi-unit franchisee or veteran operator," says Perales. "And that's exactly what attendees at the 2017 Multi-Unit Franchising Conference will find."

The conference has become a must-attend event for franchisees, as well as franchisors and third-party suppliers. This year, the record 650-plus franchisees in attendance represented more than 11,000 operating units, revenues exceeding $11 billion, and more than 120,000 U.S. jobs. Many well-known industry insiders, players, and franchise brands were present, with keynote speakers business guru Jim Collins and former NFL star Joe Theisman offering insightful and motivational talks. Packed educational breakout sessions got to the heart of operational and strategic issues multi-unit franchisees encounter daily.

Perales has served on many industry and community leadership boards, including the IFA's Board of Directors and the Multi-Unit Franchising Conference Advisory Board. He also has been recognized with many industry awards, including the 2016 Golden Chain Award from Nation's Restaurant News, 2016 101 Most Influential Latinos by Latino Leader magazine, 2016 Latino Executive of the Year by D CEO magazine, IFA's 2015 Entrepreneur of the Year, Multi-Unit Franchisee magazine's 2013 American Dream Award, the 2011 Hispanic Business Man of the Year from the Texas Association of Mexican American Chambers of Commerce, and Ernst & Young's 2008 Entrepreneur of the Year Award.

For more information on the conference visit multiunitfranchisingconference.com.