It's a Tax Turnaround For Ken Leese 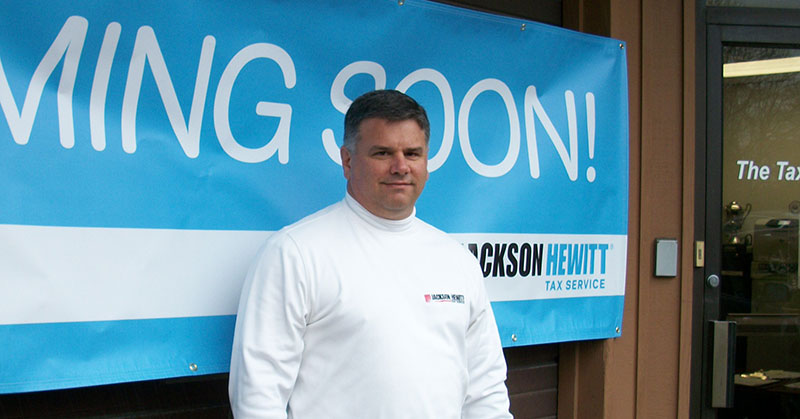 Any tax accountant will tell you that the past five years have been tough times for their business. That was certainly true for Jackson Hewitt multi-unit franchisee Ken Leese.

"With the state of the economy, you look at how fewer people working translates into fewer tax returns that need preparing," says the 47-year-old Jackson Hewitt franchisee. "Our business has struggled somewhat to remain status quo, and one of the realities we discovered is that the tax business is not so recession-proof." Regardless, Leese has remained steadfast and has made calculated and strategic moves since we profiled him in 2010.

He's divested all of his Delaware territories and replaced them with Jackson Hewitt units in Southern New Jersey, his home base. He still has a few locations in Pennsylvania but the core of his operation is now in New Jersey. Proof that the market is picking up? He's grown from 40 locations at the end of 2013 to 45 today.

Since we last spoke with him, Leese had grown his Play N Trade stores from one to three, but has cut back to a single location. "That business model is struggling and there has been a lot of change in computer gaming," he says, adding that there's a new management team at the brand and he's eager to see what they have in store.

Leese is "cautiously optimistic" about the Jackson Hewitt brand. He points to the brand's recent change of ownership and leadership changes at the top. "I plan to stick it out. I like to say I'm cautiously growing," he says.

And he certainly knows how to do that. Early in his Jackson Hewitt career, Leese was overseeing more than 100 locations up and down the East Coast. It was tough but lucrative work that involved a lot of travel. But when kids came along, a twin boy and girl, things changed. "I wanted to be home and see my kids grow up," he says, and began to consolidate his operations closer to home.

These days he's comfortable with the number and more centralized location of his locations. However, the New Jersey native, who loves living in his home state, says he's worried about the fallout from the closing of casinos in Atlantic City. "This could be devastating for people here," he says. "The layoffs could be 50,000 to 60,000 people. I'm already thinking about what we can do to help. Maybe offer free tax returns. I don't know, but we want to do something if we can."

Leese says he never could have made it as far as he has in business without his dedicated and talented management team. Together, he says, they have faced increased governmental regulations, the emergence of online tax filing, and growth in tax preparation competition. "I promised my team several years ago that I would keep them and that we would all get through this," he says. "I think that time has come. We made it and things are looking promising for the future."

Leese always has his eyes and ears open for business opportunities. One avenue he is actively investigating is large retail stores, such as Walmart or Sears, that allocate space to Jackson Hewitt to prepare customer taxes in-store. "It's a managed risk that offers a less expensive option for me," he says. "That makes sense."