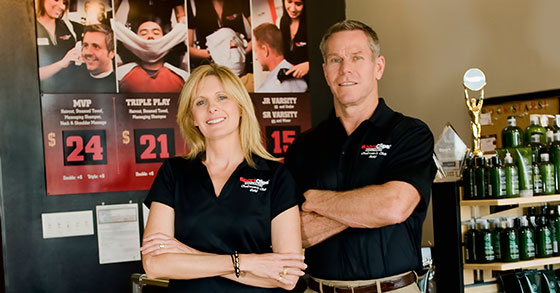 Bobby and Lori Forrest came well-prepared for their second careers as multi-unit franchisees for Sport Clips. The couple grew up in Texas and met at Texas A&M University, where he graduated with a degree in engineering technology and she earned her master's in land economics and real estate.

As they approached 50 and decided to begin building their own business, they looked no further than the place where he gets his haircuts. "I was a customer and I liked the concept," he says. "We also liked their conservative approach of having franchisees continue to work their regular jobs until the shop was up and running. It took the pressure off the first couple of years while we were learning."

So after 27 years in sales and management with electronic components distributor, Bobby retired and joined forces with Lori, a commercial real estate appraiser, to buy two corporate Sport Clips salons and open a third. "We went from zero to three in the first year," he recalls. "We found our skills to be complementary. I spend my time on sales, marketing, hiring, and firing, and she works more in operations."

The couple spent those 3 years learning their new business before opening another salon. "We learned about owning a business. We were diligent and persistent and figured we'd do whatever it took. You have to be committed. If you get into it halfway, you'll get halfway results," he says, joking that if they'd started with the new store instead of the two existing stores, "We might have quit."

Their involvement in the community through church, school, philanthropy, and coaching their daughters' sports teams demonstrated the importance of networking and brought new customers to their stores.

Today the Forrests have 8 high-performing Sport Clips in Fort Worth and Dallas. "We're continuing to grow, but we're doing it in a more strategic way. There's no magic number for us. We've never said we wanted to own, say, 40 stores. We really want to focus on having the best stores and making sure we have more profitable averages," he says.

They attribute the mark they've made with their units to choosing a franchise "with a philosophy that aligned with ours, and completely embracing the system."

Often contacted for advice by fellow Sport Clips franchisees, the Forrests are happy to give back. "People were willing to open up to us when we got in and needed information, so we try to share whenever we're asked. We don't consider other franchisees our competitors. The better they are, the better we are," he says.