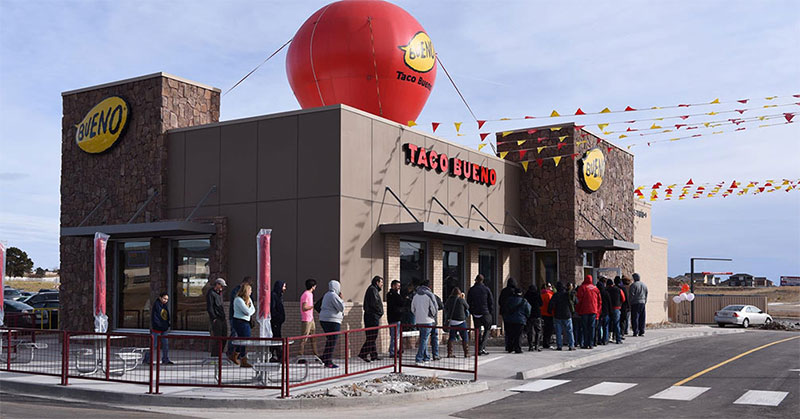 Taco Bueno has spent much of 2016 expanding in Colorado, Oklahoma, and Texas. The Tex-Mex quick service chain opened nine new restaurants in 2016, two franchised units and seven company owned locations, with plans to open another 13 to 18 restaurants in 2017. They'll do it, in part, because of multi-unit operators like Rick Verity, Larry and Kimberly Coon, and Jed Blackburn and Brian Nelson.

The brand has a new multi-unit expansion agreement with current franchise partner, Quality Brand Management (QBM), led by Rick Verity. He has been part of the Taco Bueno family for more than 10 years, operating four Taco Bueno restaurants in Central Arkansas and one in Oklahoma. QBM opened two new restaurants in Oklahoma in 2016 and will continue to expand in 2017 and beyond.

Larry and Kimberly Coon have signed a multi-unit franchise agreement with the brand in their hometown of San Angelo, Texas. The Coons are experienced restaurant operators in the San Angelo area as long-time franchisees for Little Caesar's Pizza.

Across the state line, Jed Blackburn and Brian Nelson will bring Taco Bueno units to the Shreveport/Bossier City area of Louisiana. Blackburn is a successful entrepreneur and developer and Nelson brings a host of skills obtained through a career in the Air Force.

West of the Dallas-Fort Worth area, Taco Bueno has inked a deal with an experienced special venue operator to place a drive-thru restaurant in a new travel center. The travel center will feature dedicated semi-truck refueling and parking, with Taco Bueno as the primary dining option.

According to Taco Bueno President and CEO Mike Roper, "Special venues like this are an important part of Taco Bueno's growth plans, and we are actively looking to provide dining options for customers in travel centers, airports, and other unique locations."

Smashburger Multi-Unit Operator Adding More Locations
Entrepreneur Adds Wing Zone Location to Her Holdings
Sponsored
MassageLuXe Redefines the Meaning and Success of a Membership-Based...
Survey Says Guests Will Crave Connection, Value, and Convenience in 2023
The Power of Belief: Breaking barriers, building success
Getting to Know One Another Beyond the Dollars and Cents