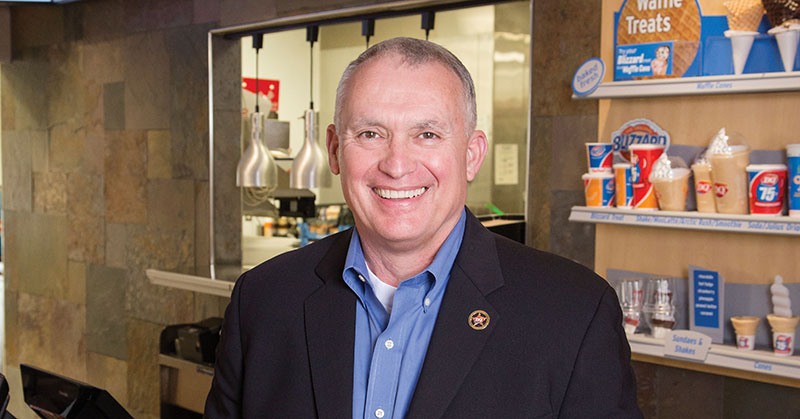 Bill Spae was taking a little time off when he got a phone call with an investment opportunity too good to pass up. He took the deal to invest in and become CEO of Vasari LLC (the largest Dairy Queen franchisee in Texas and the second-largest in the DQ system), and to improve operations and double the size of the company.

Spae, who most recently served as CEO of Mooyah Burgers, Fries, & Shakes and COO of CiCi's Pizza, loves running companies. And in early 2014, he brought those 40-plus years of franchising experience to Vasari's 76 Dairy Queen restaurants--70 in Texas and 3 each in New Mexico and Oklahoma.

Spae, who began his career at Burger King, has a seemingly bottomless well of experience running, growing, and turning brands around. He's held executive positions at TGI Fridays, Taco Bell, Wendy's, Metromedia Restaurant Group (Bennigan's, Steak and Ale, Ponderosa, and Bonanza), Hollywood Video, and Palm Beach Tan. He also has been a franchisee of Taco Bueno in Texas.

"I'm a recovering franchisor," chuckles Spae. "There is a uniqueness about that experience that I think provides a perspective that maybe a lot of franchisees don't have."

So why get back in the game, and why Vasari? "The combination of being able to work with a number of talented people and create something special was important--and I also loved the brand," he says. "I felt strongly that if we moved the company in the right direction we had an opportunity with an iconic brand to do great things--and we have."

Along the way, Spae has learned from some of the best, including Dave Thomas, whom Spae met while working as a division vice president at Wendy's. "I was so enamored by him and his approach to business," says Spae, who would often drive Thomas around to restaurants when the founder stopped in Texas to visit his daughter and grandchildren. "He was so focused on high quality and taking care of the guest and the employee. He would say, 'We have to make sure people do things right, but we have got to be nice.' That made a huge impression on me."

Spae's time with Dan Scoggin, founder of TGI Fridays, offered up an industry crash course as he took on roles in management, training, and then, as the company's youngest vice president of development, helping to take the chain public. When Spae was tapped to resurrect Steak and Ale, his decision to seek advice from founder Norman Brinker laid the foundation for the chain's successful turnaround blueprint.

Spae credits great mentors for teaching him the art of listening and "speaking your mind in a constructive way." He says "pure luck" has put him in the right place at the right time, but his willingness to put himself in a position to succeed is now paying off for others as he focuses on inspiring and mentoring those around him.

With the "tremendous amount of fear and difficulty right now in the world," he says. stepping up to lead has never been more important. "I know in business there is a lot of fear about what is going to happen in the future," says Spae. "What we all have to get our heads around is that you are only as good as the people who work for you. We as leaders, I think, aren't the people who fix the problems. As leaders we need to be the people who hire and train and teach the folks that fix the problems."