2019 AFDR: How Do You Measure Up?
Company Added
Company Removed
Apply to Request List
0 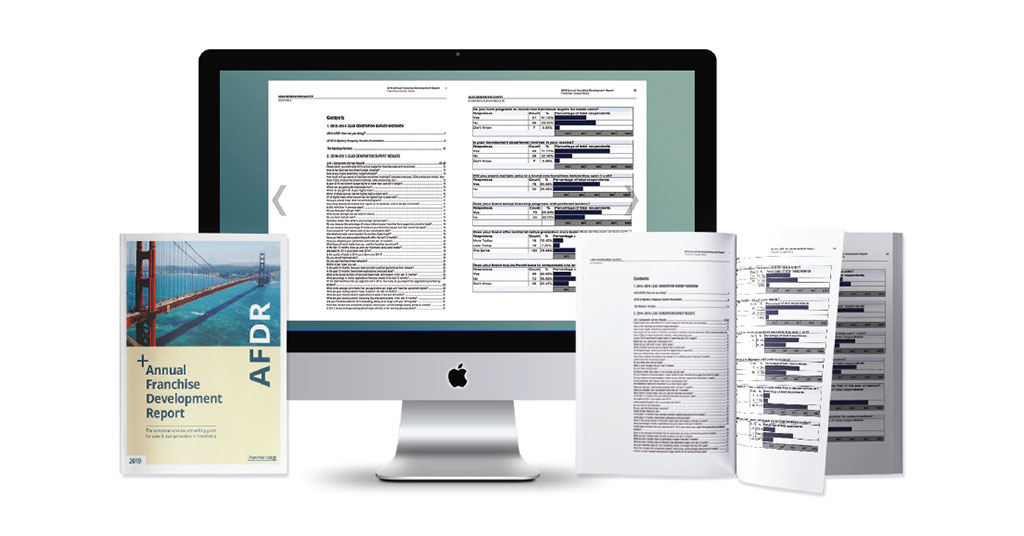 Benchmark your recruitment against 100+ brands

Results from the 2019 Annual Franchise Development Report (AFDR) were unveiled in late October at the 20th annual Franchise Leadership & Development Conference (FLDC). The 2019 AFDR is based on responses from 109 franchisors representing 34,058 units (26,838 franchised and 7,220 company-owned).

Participants in the survey consisted of franchisors that completed an online questionnaire. Responses were aggregated and analyzed to produce a detailed look into the recruitment and development practices, budgets, and strategies of a wide cross-section of franchisors. The data and accompanying commentary and analysis provide the basis of the 2019 AFDR.

Highlights from the report were presented in a general session at the conference by Franchise Update Media's EVP and Chief Content Officer Diane Phibbs. Other aggregated high-level observations gleaned from this year's survey included:

Below are additional highlights from the 2019 AFDR. Ordering information can be found on page 33. (Conference attendees receive a complimentary copy.)

By segment, food brands exceeding their goals (27 percent) dropped precipitously from previous years. Possible explanations include oversaturation of the domestic market for fast food brands, changing consumer preferences for healthier fare, and the spate of mergers and acquisitions resulting in consolidation. It also could explain why so many U.S. food brands are looking overseas for growth. The segment that fared best by far was investments above $250,000, where 3 out of 4 (77 percent) brands exceeded their goals. Brick-and-mortar services exceeding their goals fell from the previous 2 years, while services based on territory/population doubled from the previous 3 years. A comparison of the "exceeders" by industry segment, reveals the following:

The following are seven of the most important things the more successful brands have seen or done in their franchise recruitment and development that helped them rise above the competition:

"They have a strategy. They know where they want to grow, who their target customer is, and how to reach them," said Phibbs.

In addition, she pointed to the importance of unit-level business conditions as a factor in how today's top-performing brands differentiate themselves from the competition. "Locations that aren't doing well can lead to transfers and closures. Surveys of multi-unit franchisees tell us that transfers and closures can be deal killers or red flags for them," said Phibbs. "If this is happening in your system, I'd suggest you have a conversation with your partners in operations and marketing right away. Get the brand on board to improve unit-level conditions before they kill your growth."

The 2019 Annual Franchise Development Report (AFDR) delivers data collected from 109 franchisors representing 34,058 units, with responses organized by industry, unit investment, system-wide sales, and more. The annual report provides franchisors with the ideal tool for studying their development practices, benchmarking their sales and recruitment budgets against their own industry categories, and setting goals and budgets for the year ahead. The report also includes research into online recruitment practices, the growing use of mobile and social tools by prospects, and best practices by franchisors.

The 2019 AFDR is packed with timely information and benchmarking data that can help your franchise system grow faster and close more deals--while saving thousands of dollars in cost per sale. Based on in-depth surveys from 109 franchise companies, this thoroughly researched report reveals the success drivers that are sure to boost the output and quality of your sales department.

Filled with the most comprehensive sales and lead generation data in franchising, the 2019 AFDR, at more than 250 pages, is a must-buy tool for franchisors, development consultants, and advertising, marketing, and technology suppliers--and is ideal for benchmarking and building budgets and media plans.

The complete 2019 AFDR, with analysis and benchmarks, is available for $350. For ordering information, go to https://afdr.franchiseupdate.com or email your questions to AFDR@franchiseupdatemedia.com.