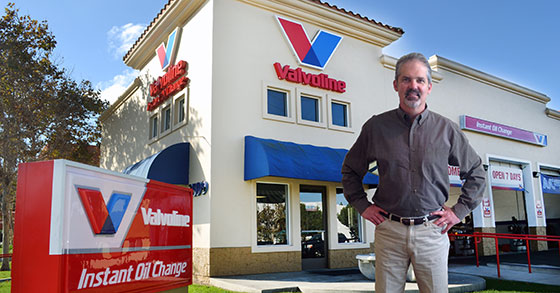 In 2012, he orchestrated the purchase and successful rebranding of 72 EZ Lube oil change service centers in Southern California, the largest single acquisition in industry history. The deal, which included many distressed properties and just as many naysayers (including within Valvoline) was a "big piece to bite off," says Smith.

"We went in a little bit blind, but we knew we could do it," he says. "It definitely confirmed that the model that Valvoline has put together--and we have influenced that model--can work virtually anywhere in the United States."

Smith began his career working with a different kind of oil. A prep school rower recruited by the University of Pennsylvania, Smith initially took his dual major of geology and environmental studies to the oilfields of Oklahoma. He spotted a business opportunity in the quick lube business (a concept he discovered no one back in Boston knew much about) and never looked back. In 1989, he opened the first franchised Valvoline location in Somerville, Mass., offering customers a stay-in-your-car solution to preventative maintenance.

Internally, Smith strives for a transparent culture that practices a policy of open accounting to motivate employees, who earn a percentage based on store revenue. Smith says he wants to make sure those profits are good profits. The industry veteran has built a culture of "doing the job right, not taking shortcuts, and treating customers like gold. You need those customers to come back," he says.

"We perform better than virtually every franchise in the Valvoline system," Smith adds. "We know we are absolutely killing the competition, and it is a great opportunity right now. We are going to take advantage of that by growing aggressively."

Why it's Important to Distinguish Between Leadership & Management
History Lessons: Investing for the long haul
Sponsored
Busting Cannabis Misconceptions & Why This Franchise Opportunity Is...
Hiring Advice from a Staffing Agency Multi-Unit Owner
Largest Anytime Fitness Franchisee Sold to PE Firm
Gratitude in the Workplace: Better Employees Through Chemistry