Is the 4-Day Work Week the Future of Work? 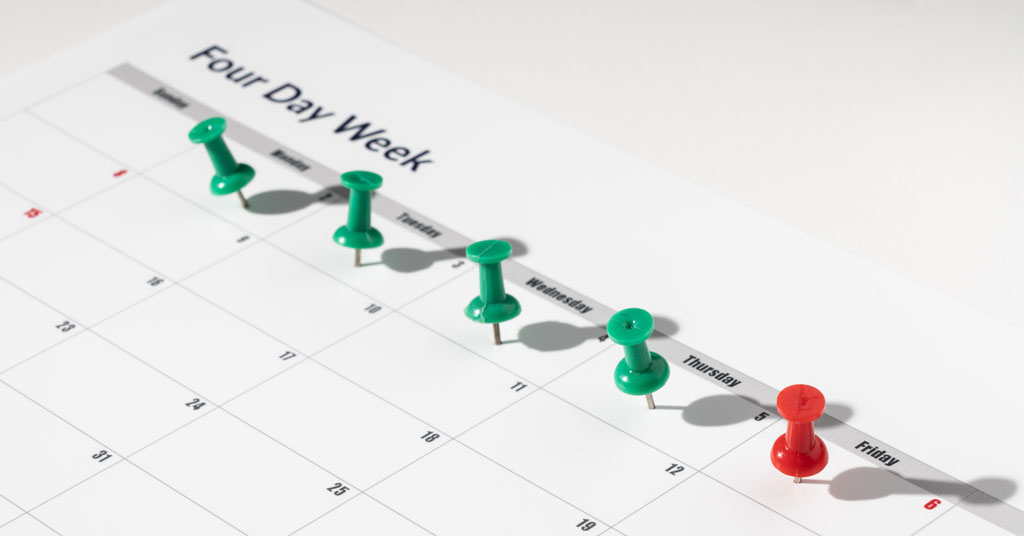 Where did the 5-day work week come from? Who invented it? It is right for 2023, or are there better alternatives? Could 4 days be the flexible future of our work week? Or is 35 hours a week the right number, with business leaders allowing employees the option of spreading those 35 hours over however many days a week they prefer?

Why businesses and employees are rethinking the 5-day work week

First, let’s view why the traditional 5-day work week has come under such scrutiny. Whether it is something you agree with as leaders or not, the labor market is forcing companies to explore new flexible work schedule alternatives.

An increasing number of us don’t want to be defined only by our careers. We want to plan work around our lives, not the other way around. Building stronger families, addressing the need for better childcare, and placing greater focus on our physical and mental well-being are all silver linings of Covid-19, which forced us to rethink our priorities. The biggest challenge to our society is so many peoples’ careers and families peaking at the same time. It is also the biggest driver of today’s evolving, post-pandemic business model.

“It was about a century ago that Henry Ford reduced the work week from six days to five because he found that people were more productive, morale went up, there was more loyalty, there was lower turnover, and he said it was good for business,” said behavior psychologist Adam Grant in his recent podcast, “The four-day work week: luxury or necessity?”

In the 1930s, Kellogg’s offered its workers 6-hour shifts, reduced from 8 hours for exactly the same pay. This dramatically increased the number of people who wanted to work for Kellogg’s. Speaking at the recent World Economic Forum, author and social entrepreneur Hillary Cottam shared Kellogg’s results:

“What’s really interesting is that at Kellogg’s, productivity went up dramatically. Accidents went down. The economics of the company really changed and people’s lives improved. People said that they had ‘more life,’ and that they could fit in taking care of people. They had time to make things. They ran their own sports teams.”

In a nutshell, with a compressed work schedule, Kellogg’s employees of decades ago enjoyed greater work-life balance with more room in their lives for the things that were important to them, such as family time.

However, times have changed, and many organizations around the world are rethinking the work week. A 4-day work week trial has been running since January 2022 across several countries, where more than 70 firms are taking part in the scheme where employees get 100% pay for 80% of their normal hours worked.

After six months, data shows that productivity has been maintained or improved at most firms. More than half the organizations responded to a survey midway through the trial: 86% said they would keep the four-day week policy after the trial ended. The majority of firms reported that it is working well for their business, while 95% said productivity had stayed the same or improved during the shorter week.

According to Nicci Russell, managing director of Waterwise, one of the companies in the trial, “We certainly all love the extra day out of the office and do come back refreshed. It’s been great for our well-being, and we’re definitely more productive already.”

Post-pandemic, employee satisfaction (and lack thereof) is speaking volumes, with office workers in particular benefiting from the flexible model.

Ohood Al Rumi, Minister of State for Government Development and Future in the United Arab Emirates, shared why they embarked on the 4-day work week trial. This decision was triggered by several reasons, she says. “First, enhancing well-being. Second, strengthening the family bonds and community relations because people will have more time to take care of their families, whether men or women, and they will have more time for recreational activities. A third is economic, because when people have a longer weekend, they can spend more, and this will benefit the local domestic sectors and also better align with the global markets.”

The most successful case studies are from organizations that evaluate not by the time employees put in, but by the contributions they make. “We focus on results, not clock in, clock out. Productivity is at the heart of what we do, and we have systems to measure the performance of entities and individuals,” says Al Rumi. Among employees, she said, 70% felt they were experiencing greater efficiency with a heightened ability to manage time and prioritize work; and 71% enjoyed more time for family responsibilities. Elevated employee happiness resulted in 55% less absenteeism, benefiting all concerned.

Political scientist and author Anne-Marie Slaughter echoed a similar sentiment, “The United States really thinks that how hard you work is the measure of your moral worth. I would argue that caring for your family, that the time you spend on emotional caregiving, is, if anything, more a measure of moral worth, but at the very least it’s equal.”

The flexible work week is being analyzed even further. “What we know now is that, in fact, that wasn’t the kind of experiment that stuck,” says Cottam. “Four days is a male solution to this problem because, basically, it doesn’t think about care. Because care of our children or our parents or just being with friends doesn’t happen in four days. It happens around the day.” She encourages business leaders to take a fresh look at time boundaries around working and caring, playing, and simply being, i.e., “rethinking the linear life.”

Cottam has figured out an alternative to the 4-day work week focused more on the flexibility of when employees work instead of on a fixed set of days. “I’ve used an organization called Timewise for my hiring. Timewise has women who basically want to work predictable flexibility. I hire from them. Immediately, I have a fantastic workforce that shares that norm.”

Cottam claims this leads to a much more equitable work situation, one that sends any potential “Woe is me” attitude packing. The childcare needs of some employees don’t automatically become more important than those of others enjoying social interactions with friends, i.e., the parents and the child-free aren’t pitted against each based on greater or lesser obligations outside the workplace. It is a solid example of brilliance in the basics.

The new reality, whether you’re ready or not

Jonas Prising, CEO of ManpowerGroup and participant in the 2022 World Economic Forum in Davos, says that rethinking the work week is a necessity today. “In labor markets that are constrained in terms of workers, workers are making the choice for us. They’re joining organizations that will provide flexibility and choice—and this is really the way to attract and retain talent.” (See his article, What does the 4-day work week mean for the future of work? from the May 2022 World Economic Forum annual meeting.)

The 4-day work week isn’t a case of “What if it happens?” It is happening, heavily influenced by the demands of workers themselves. Experiments across the global workplace are proving that it can be done successfully, leading to a boost in morale, greater productivity, and higher employee retention.

Related article: “Where Have All the Workers Gone, and How Can I Attract and Keep Them?”

Huckleberry's Breakfast & Lunch
Own a franchise that takes you to the “Bayou” every morning and gets you home for dinner every night! Operating Hours 7 AM – 3 PM!
Cash Required:
$350,000
Request Info
Added
Learn More
Wienerschnitzel
Join the World’s Largest Hot Dog Chain. As a successful and iconic franchise of over 60-years, we OWN the hot dog category and want to share...
Cash Required:
$250,000
Request Info
Added
Learn More
Share This Page