Man of Many Hats: Longtime Hardee's Franchisee also is Mayor and Publisher 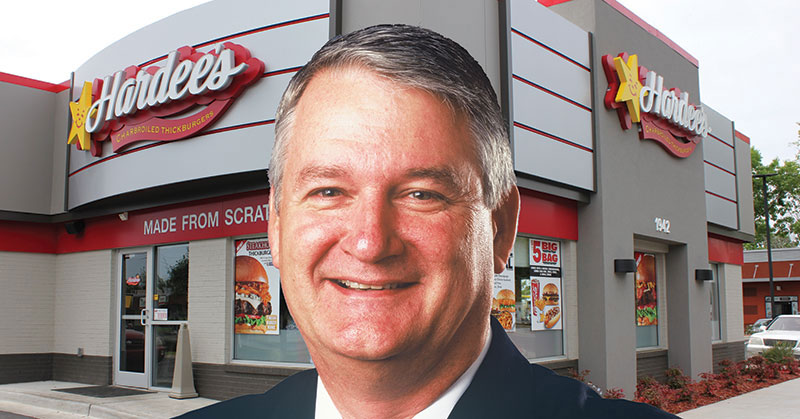 If you want to see the positive influence of Hardee's franchisee Dan Ponder at work, look no farther than his hometown of Donalsonville, population 3,000. Nestled in the southwest corner of Georgia's Seminole County, Donalsonville is home to Ponder Enterprises, which opened its first Hardee's restaurant in 1983. Ponder is publisher of the town's award-wining newspaper, the Donalsonville News, and in 2013 was elected mayor.

At the moment, he is tirelessly leading an effort to make his town the nation's first Smart Rural City. The broadband project, which has the potential to transform the community, "could have never happened without franchising and my long relationship with Hardee's," says Ponder, the recipient of the 2016 Spirit of Franchising MVP Award. The plan to wirelessly blanket the city is designed to provide the rural area with virtual education, business, and cultural arts opportunities and make free high-speed Internet available to citizen.

Ponder, who grew up working in his family's Alabama peanut processing plant, was initially drawn to franchising for its strong support system. "I'm not a big fan of reinventing the wheel," he says. "I'd rather take someone else's wheel and make it better, and franchising allows me to do that."

When he made the decision to open a restaurant, he optioned property on the biggest intersection in Donalsonville--and then went looking for a franchise. Ponder's first Hardee's was such a success that his brother Ernest joined him as a business partner, and the pair--now with 36 Hardee's in 3 states (Alabama, Florida, and Georgia)--have never looked back.

These days, it is the franchising friendships that Ponder cherishes most, particularly those formed during the early days as a founder of the Independent Hardee's Franchisee Association (IHFA). "We were all talking the same language, fighting the same battles, and trying to help each other succeed," he says. "That camaraderie transcended the business and became personally important and invaluable to me."

Ponder Enterprises is an operations-focused franchisee organization, opting to own the building and land underneath. A dozen years ago Ponder scrapped a formal mission statement for a focus on providing employees and various departments with the tools to be the "best franchise group" in the Hardee's chain.

Ponder and his company have been lauded with numerous awards over the years--the most personally notable, the John F. Kennedy Profile in Courage Award that Ponder received in 2003 as a Georgia legislator, after his unplanned, impassioned speech led to the passage of the state's first hate-crimes legislation. The life-changing impact of the award continues to serve as the foundation of his business today.

"We want to be trend-setters in our brand," he says. "We have always been cutting-edge when it comes to products and equipment. But there is never a question about doing the right thing. And I think we are respected for that." It's all about being the best you can be, a mantra Ponder lives by.

Formative influences/events:
My brother and I grew up in a multi-generational family business. We were given the opportunity to work in positions of responsibility at a very early age. My father and grandfather held us accountable as teenagers, which allowed me to open my first Hardee's restaurant at the age of 29.

Key accomplishments:
I was awarded the John F. Kennedy Profile in Courage award in 2003 related to a speech I gave as a member of the Georgia House of Representatives. That speech and award have affected my life in many ways since then. Within the Hardee's system, I was awarded the Founders Award by the IHFA in 2004. In 2009, our company received the first annual Wilber Hardee's Founders Award, as well as the inaugural CKE Star of Excellence Award from the franchisor. We have also been named Hardee's national Franchisee of the Year.

Work week:
I would say five and a half days a week, though my wife would say it is more than that. I tend to work early and late, and some on weekends, to get things done when no one else is around. As the mayor and publisher of the local newspaper, I try to balance my time between the entities I am involved with.

What are you reading?
In addition to various trade magazines and the Wall Street Journal, I am currently reading The Road to Character by David Brooks. I also am the publisher of an award-winning weekly newspaper in Georgia, which celebrates its 100th anniversary this year. I read the Donalsonville News cover to cover each week.

Best advice you ever got:
My father warned me that I should not measure myself when everything was going good. He told me, "The measure of a man is determined by how he responds when he stubs his toe." He was right.

What's your passion in business?
Developing people who become part of our company family. I take great joy in seeing our team take ownership of their responsibility and talk with pride about working for our company.

Business philosophy:
Develop a plan for steady sustained growth and then build a team that makes it happen. Build every restaurant with the plan to be operating it yourself for the next 30 years. No shortcuts.

Management method or style:
I try to focus on the big picture. We have many good, longtime employees. I try to set expectations for them, make sure they have the tools to succeed, and then I stay out of their way.

Greatest challenge:
People. Finding the right people to operate the restaurants at the store level and then keeping them happy. The implementation of the Affordable Care Act has been particularly challenging in the past two years.

How do others describe you?
I would like to think they say I am fair, honest, hard-working, generous, and, hopefully, a good man.

How do you hire and fire, train and retain?
We focus on hiring people with the right attitude. We can train anyone with the technical skills, but we can't teach them to smile. I often ask when an employee is terminated if we did all we could as a company to help them succeed. We are putting more and more resources into training while at the same time developing tools that identify and reward good behavior. Given the high cost of replacing employees in today's market, we try to provide the best benefits we can at an affordable price. This will be the eighth year in a row we have provided a 100 percent match for all employees who choose to participate in our 401(k) plan.

Growth meter: How do you measure your growth?
We measure comparable sales, transactions, profits, and employee retention, as well as how we performed against our plan. We measure some 16 different items in a matrix to compare restaurants' performance against each other.

Vision meter: Where do you want to be in 5 years? In 10 years?
I would like to complete our current development plan and be operating 45 to 50 restaurants, primarily on our own real estate. I want our management team fully staffed in preparation for the next generation.

What are you doing to take care of your employees?
Each year, we hold a company-wide General Manager Rally at a resort for three days. We provide trips (a cruise this year) for our top 10 managers. We try to make our company an employer of choice in our markets by providing competitive pay with excellent benefits at affordable prices. As I mentioned, we have been matching our employees' 401(k) contributions with a 100 percent company contribution for the past eight years.

What kind of exit strategy do you have in place?
I grew up in a family-owned business and know all the benefits and disadvantages of working with your children. I currently have one son-in-law involved in the company, though time may bring some of my brother's children back home. Our overall strategy is to have a strong enough management team to allow the company to operate and grow after I am no longer involved in the day-to-day operations.

Teriyaki Madness
Teriyaki Madness is the #1 Fastest-Growing Big Restaurant Chain for a reason: high-quality food, cutting-edge technology and incredible franchisee...
Cash Required:
$200,000
Request Info
Added
Learn More
Sharetea
Sharetea started its paces as a small tea vendor through back in the year of 1992 in Taiwan, a place with tea of origin. The name of the brand -...
Cash Required:
$100,000
Request Info
Added
Learn More
Share This Page