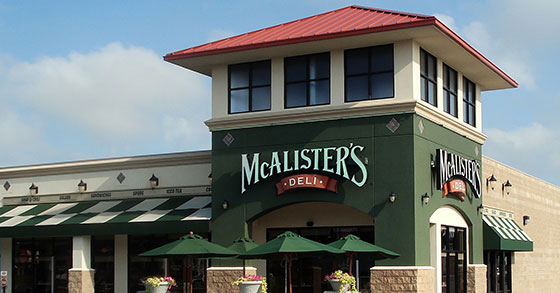 McAlister's Deli is on the grow and has signed several more development agreements with new and existing franchisees to open restaurants in Southern Georgia, North, Central, and Southwest Florida.

Summerville, SC-based franchise group DMAC, LLC, which already operates McAlister's Deli locations across South Carolina, Florida, and Georgia, will be opening several more of their restaurants between Southern Georgia and North Florida. The brand also signed development agreements with two new franchise groups to open restaurants on the west coast of Florida between Naples and Sarasota, and in Orlando.

"We are very excited to bring the McAlister's award-winning, fast casual dining concept to Orlando," says Berry, co-owner of Good Eats Florida. "We are confident the diverse menu, comfortable dining environment, and genuine hospitality that is so strongly associated with the McAlister's brand will resonate with Orlando's fast-growing population."

In Southwest Florida, the new franchisees have a proven track record as successful Five Guys franchisees and are targeting development in Naples, Fort Myers, and Sarasota.

"With these groups, we have the opportunity to bring McAlister's to untouched markets in Florida like Sarasota, Naples, and Orlando, as well as expanding into southern Georgia," says Jeff Sturgis, McAlister's vice president of franchise development.

The brand has also just signed a 10-unit development agreement with local husband-and-wife franchise team Marcelo and Berny Montalvan to open new restaurants in communities across Miami-Dade and Broward counties. The first of the new locations is slated to open in early 2016.

"For years, McAlister's fans have been asking us to bring the brand to South Florida, so we are thrilled to partner with new franchisees Marcelo and Berny Montalvan to grow our footprint in untouched markets throughout Miami-Dade and Broward counties," says Sturgis. "Marcelo and Berny have extensive multi-unit restaurant management experience as high-performing franchisees of Fuddruckers for the last 13 years."

"As residents of South Florida, we take great pride in operating restaurants that offer outstanding customer service and a friendly environment throughout our community. When we learned McAlister's was targeting growth in the market, we knew it was the perfect opportunity for us to expand our restaurant portfolio," says Marcelo. "We are looking forward to bringing McAlister's Famous Sweet Tea, sandwiches, soups and spuds to the local communities throughout South Florida for the very first time."

McAlister's also is targeting franchise growth throughout Palm Beach county, particularly in areas such as Boca Raton, Delray Beach, and West Palm Beach, among others.

The McAlister's Deli brand now has 337 restaurants in 24 states.