Mover and Shaker: John Judson Grows with The Brand 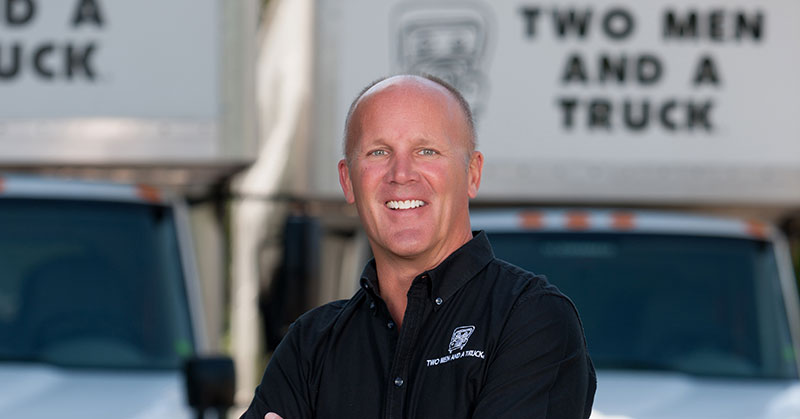 John Judson and his partners have grown their Two Men and a Truck franchises in St. Louis, Chicago, Salt Lake City, and Boston into a 15-franchise operation that brought in $16 million in revenue last year.

They could just enjoy the ride as the largest franchisee for the popular moving company, but Judson, who earned this year's Single Brand Leadership MVP Award, says that's not the way they roll. "The folks at Two Men and a Truck are a really close group of good-hearted people, so we're happy to have them use us as a pre-sale, have us talk to potential franchisees, and get them pumped up by sharing our stories."

Judson bought a single franchise in St. Louis in 1994. In 2001, he brought in his brother Jason, who had been working with him, as a partner. Joel Trost, another partner, operates the Boston and Chicago franchises. And all look for opportunities to develop team members from within.

"There are many opportunities out there, and we have managers who develop within our franchises and eventually become our partners," says Judson. "We bring different personalities to the table, which gives us a wide view on how to be successful."

He attributes much of the company's success to the philosophy of being open and sharing news, both good and bad. "We all see the numbers, the profits, everything--they're published monthly. If I've got a problem or think we're spending too much on marketing, I've got a group of people to help work it out," he says.

Judson tells some funny stories about his early work as a Two Men and a Truck franchisee. For instance, he'll never forget his first (and last) eviction experience: there was a 500-pound hog in the house. "He was so huge he couldn't walk, and we had to get animal control to come and get him--but not before friends and neighbors brought their kids over to see him."

Despite scrapping for jobs in the beginning, Judson says he's glad he got into the business when the franchise was young and growing. "We wound up with great territories," he says.

"The Judsons have continued to grow, bring on new talent, stay engaged with corporate, evolve, and change with the system," says Jeff Wesley, CFO of Two Men and a Truck International. "I am proud to see new owners coming into the system, but it's also great to see current owners buying additional locations and benefiting from the momentum we have gained. Our system is founded on giving back, and this is another way I see we do. We all win as the system continues to grow to new levels."

Formative influences/events:
The single biggest event happened when I was seven. My father had just been fired from his insurance job, the one and only time I have seen him cry. At that point I had made the decision to never work for someone else. My older brother taught me to use my hands and to have a good work ethic.

Key accomplishments:
Getting my first daughter through high school and being able to pay for her college education. Winning Two Men and a Truck's Humanitarian Award several times.

What are you reading?
Killing Lincoln by Bill O'Reilly and Martin Dugard, and Fifty Shades Darker by E.L. James.

Best advice you ever got:
My late father-in-law said, "To have a friend, be a friend," and my late mother-in-law telling me that marriage "doesn't get any easier."

What's your passion in business?
Mentoring the young managers soon to be partners.

Business philosophy:
Our employees are more important than the customer.

Management method or style:
Hands-off with a lot of delegation. I prefer to let people make mistakes and learn.

How do others describe you?
Not normal (but who wants to be?). A high risk-taker.

How do you hire and fire, train and retain?
We usually pull our managers from our driver and mover pool. Occasionally we use a headhunter.

Growth meter: How do you measure your growth?
By revenue, sales, and by getting our next managers ready to become partners.

Vision meter: Where do you want to be in 5 years? 10 years?
Doing the same thing I do today. I love what I do!

What kind of exit strategy do you have in place?
It's more of a succession plan.

Why do you think you were recognized with this award?
Because we paid the franchisor the most royalties? (laughing)

How have you raised the bar in your own company?
Pushing hard every day because we have a short period during the year to make money and we need to take advantage of it. Raising the bar is pushing hard, maintaining superior satisfaction scores, and having fun at the same time.

What innovations you have created and used to build your company?
Early on when we first started with Two Men and a Truck, we were key players in the development of the Movers Who Care software. We still use the newest version to book jobs.

What core values do you think helped you win this award?
Honesty, integrity, and openness.

How important is community involvement to you and your company?
Very important. We donate huge amounts of time to community events as well as to individual charities and fundraisers.

What leadership qualities are important to you and your team?
Integrity and the ability to delegate.

Nautical Bowls
At Nautical Bowls, we combine healthy, fresh superfood bowls with an uplifting atmosphere, giving you energy to life a full life! Our goal is to...
Cash Required:
$100,000
Learn More
Edible®
Edible has been the world’s leader in the gifts and treats category for 20-plus years with more than 1,000 locations globally. Edible Brands is...
Cash Required:
$80,000
Request Info
Added
Learn More
Share This Page