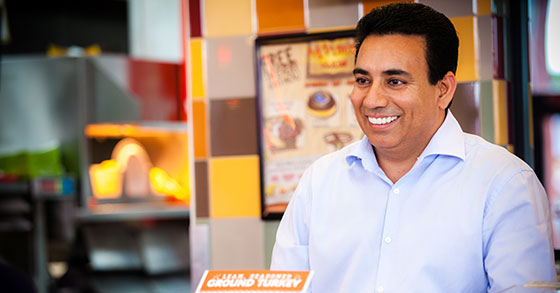 Nachhattar Chandi says his story is one of overcoming "colossal odds" and the resulting "triumph" of coming to America to find success.

From walking 3 miles to school on India's dirt roads to founding and running a multimillion dollar business in his new country, Chandi believes his life embodies the American Dream. He came to the U.S. in 1991 and became a manager at a small gas station in Coachella, Calif. Three years later he owned the station and converted it into his first ARCO am/pm franchise.

Since then, Chandi, with his wife Susana and four children, has continued to build the business, creating hundreds of jobs in his Southern California communities. Today, the 43-year-old operates 17 ARCO am/pm locations, 3 Del Tacos, 6 Express Tunnel Car Washes, and one Subway.

He credits his company's achievements to a wife who is the "engine to my success," great franchisor partners, his father's advice about procrastination, and the opportunities available in the U.S. "Not waiting on doing things until tomorrow will many times cause one to be at the office until very late. Thus far the hard work has paid off quite handsomely, and I am humbled by what we have been able to achieve," he says.

In addition to his myriad charitable contributions and participation, an important part of his work lies in helping the young people he employs stay on track and follow their own dreams. "I take special pride in being able to offer young adults their first job, some while still in high school," he says. "This is a method by which I, as a business owner, actively improve the quality of individuals who will grow to be the fabric of our communities."