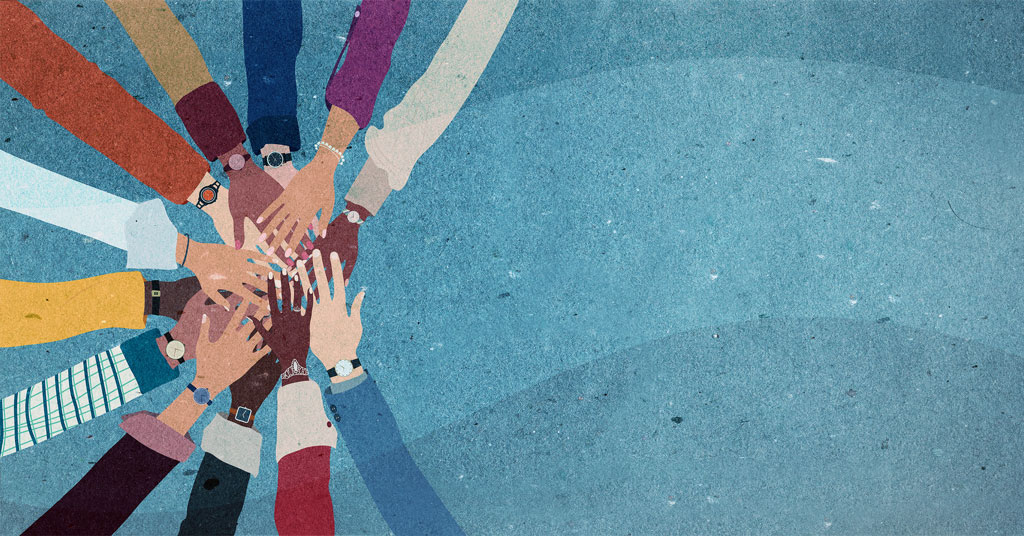 Efforts to establish a company diversity, equity, and inclusion (DEI) policy have steadily increased over the past 2 years, but 21% of U.S. companies say translating this effort to hiring is one of the biggest hiring challenges their company will face over the next year.

This is according to a recent survey from The Harris Poll commissioned by Express Employment Professionals.

Fifty-four percent of businesses reported having a DEI policy in place, compared with 52% in the first half of 2021 and 46% in the second half of 2020. Looking to the future, nearly a fifth of hiring decision-makers (18%) say their company plans to implement such a policy. Of those planning to do so, 11% say they plan to implement one by the end of 2022. 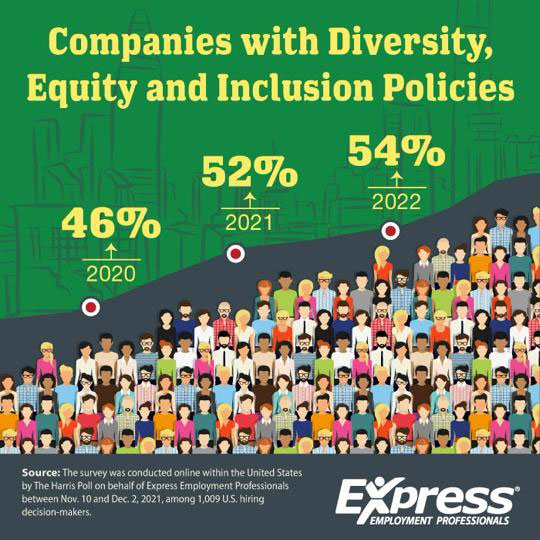 Given companies’ establishment of DEI policies, the likely next step is to actively recruit candidates outside of the companies’ traditional demographic (e.g., have unique backgrounds, racially/ethnically diverse).

Around half (49%), say their company is planning to take such action in 2022 – in line with 2021 (51%). To this point, a fifth of U.S. hiring decision-makers (21%) say reaching these diverse candidates is one of the biggest hiring challenges their company will face over the next year. This is particularly a struggle in manufacturing industries (39%).

“DEI is not going away, and companies need to recognize this,” said Yvonne Rockwell, Express franchise owner in California. “In order to stay relevant and an employer of choice, having a DEI policy and embracing DEI is not only the right thing to do, it will assist companies in attracting and retaining the employees necessary to maintain their competitive edge.”

Michigan Express franchise owner Reggie Kaji agrees that companies with DEI strategies can use them as tools for recruiting purposes. “I see a lot of candidates asking if the companies we work with have these policies in place,” he said.

For Rockwell, including DEI efforts is foundational to companies in their ability to attract a diverse and talented workforce.

“It’s important for employees to feel comfortable and have a sense of belonging in the workforce,” she said. “It’s hard to be the unicorn!”

While Kaji hasn’t seen much increase in DEI policies in his market, Rockwell said the opposite is true in her region, even including the establishment of DEI committees.

“I think it’s a topic of conversation for many companies and is starting to be looked at as a ‘need to have’ rather than a ‘nice to have,’” Rockwell said. “However, some companies are still slow to understand the importance or need.”

To ensure the workforce is more diverse and inclusive, Rockwell says managers should simply take a look at their current teams and be more open-minded about the people they hire – be more intentional with recruiting efforts to attract more diverse candidates.

The survey was conducted online within the U.S. by The Harris Poll on behalf of Express Employment Professionals between Nov. 10 and Dec. 2, 2021, among 1,009 U.S. hiring decision-makers (defined as adults ages 18+ in the U.S. who are employed full-time or self-employed, work at companies with more than one employee, and have full/significant involvement in hiring decisions at their company). Data were weighted where necessary by company size to bring them into line with their actual proportions in the population.

To learn more about the survey or DEI, contact Sheena Hollander, Director of Corporate Communications and PR at Express Employment Professionals, at (405) 717-5966.

Rusty Taco
Rusty Taco is a distinctive fast-casual taco concept, that serves creative street-style tacos that are both traditional and inspired.
Cash Required:
$500,000
Request Info
Added
Learn More
Heyday Skincare
Heyday is a fast-growing skincare company on a mission to provide expert skincare that empowers everyone to be their best self. Heyday is reframing...
Cash Required:
$350,000
Request Info
Added
Learn More
Share This Page