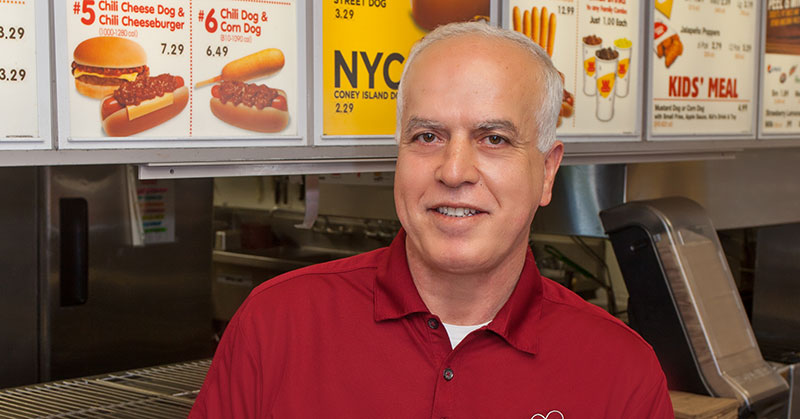 When Farouk Diab walks into one of his 18 Wienerschnitzel restaurants wearing a uniform, same as the other workers there, he's making a statement. The Israeli immigrant--and winner of the 2015 Spirit of Franchising MVP Award--is owner and president of a multi-million dollar business, but he doesn't wear a power suit.

"When I came to the United States in 1975 at the age of 18, I got a job as a janitor at a Wienerschnitzel in San Jose, California," he says. "I learned every job there and worked my way up. Then I was given the opportunity to become a franchisee."

Diab isn't resting on his laurels, choosing instead to continue to build two other restaurant chains: The Omelet House and Strings Italian Cafe, as well as adding at least two new Wienerschnitzel units each year. He also will be one of the very first to adopt Wienerschnitzel's new restaurant design with a location scheduled to open this fall in Stockton, Calif.

He's also working just as hard to reward his highest-performing managers. In 1990, he designed and implemented an incentive program through which top managers receive a guaranteed salary, 49 percent ownership, and 50 percent of the profits of their store. "Of my 18 stores, 10 of them have part-owners as a result of this incentive program," he says. "They are the future of franchising."

Key accomplishments:
My first big accomplishment with Wienerschnitzel was when I took the steps to become a limited franchise owner only two years after starting with the company as a part-time janitor. From there I was presented with the highest-performer honor and was rewarded with the opportunity to open my first brand-new store. That was 40 years ago, and today I own the most Wienerschnitzel franchised units. I have also been their leading franchisee for nearly 20 years. My goal was to become the biggest within the company, and I accomplished that.

Work week:
Every day that I'm on the job I do my best to make it to as many of my stores as I can. I work 6 days a week and at least 10 hours a day. I check in with all the managers and employees of my stores to make sure everything is running smoothly and to provide them with positive reinforcement. I oversee all operations and do any sort of problem-solving needed with customers and employees.

What are you reading?
Trade journals, newspapers. Unfortunately, I have no time to read for pleasure.

Best advice you ever got:
Alan Gallup told me, "You need to be on your own." I didn't see that in myself. I was busy busting my tail for the boss. But Alan recognized that in me and told me I'd be somebody someday. I see him now and then--he owns National Franchise Sales. When I won the MVP Award, he heard about it and called to congratulate me. He said, "I knew it from day one."

What's your passion in business?
Helping others to achieve their professional goals and being a valued contributor to the overall growth of the brands I represent.

Business philosophy:
No. 1 is keeping a positive attitude in everything I do. If sales are down one month, we're not going to be negative, because things will roll back up. I lead by example. I don't go into the stores in my regular clothes. I go in uniform. It's important to be disciplined--messing up is not okay. You reach excellence not by messing up.

Management method or style:
When I first began with Wienerschnitzel in 1975, I worked my way through every position in the restaurant. This is also what I expect of my employees. I'm confident that the cream rises to the top, and if I present leadership opportunities, hard-working individuals will go the extra mile. I make it a point to promote only from within, so those who excel are rewarded.

Greatest challenge:
There have always been challenges. Back in 1988, I converted a bank building to a Wienerschnitzel and everybody called me crazy for doing it. They were wrong. And another time, a restaurant had failed five times before I took it and made it profitable.

How do others describe you?
Generous, patient, reliable, kind, and a family man.

How do you hire and fire, train and retain?
Rather than outside hiring, I've made it a point to only promote my employees from within. I'm a firm believer that my team should work from the bottom to the top just as I did.

2015 goals:
I should have 21 Wienerschnitzel units open by the end of the year. I just opened my first Las Vegas location. It's a new market for me and I'm excited.

Growth meter: How do you measure growth?
Reaching my goal of successfully opening two (minimum) new Wienerschnitzel locations every year.

Vision meter: Where do you want to be in 5 years? 10 years?
Since I plan to open at least two stores every year, in 10 years I will have close to 40 stores.

What are you doing to take care of your employees?
As I said, I feel that it is important for employees to work their way up from the bottom, no matter how much outside experience they have. Because of this, I promote from within in my stores. This really gives employees who start off in the kitchen or as a janitor like myself, the opportunity to really work hard and to be properly rewarded for it.

What kind of exit strategy do you have in place?
I'm grooming my son to take over the family business. I've gotten him through training and now he's working with one of my best GMs, learning everything from scratch like I did.

Why do you think you were recognized with this award?
I believe I was honored with this award because of how hard I work and how much I really believe in this company. I started off as a janitor when I was 18 and have grown to become the top franchisee in Wienerschnitzel with several of my 18 stores being the most profitable of all of the brand's 325 locations. It's because of my hard work that I was recognized in the system and was rewarded with the opportunity to open my own store. I am proud to be a longtime member of Wienerschnitzel's Million Dollar Club.

How have you raised the bar in your own company?
By continuing to hold the top spot as Wienerschnitzel's leading franchisee for nearly 20 years. Also, Wienerschnitzel recently unveiled a new restaurant prototype with a significantly smaller footprint. I'm excited to be one of the very first adopters of the new restaurant design with a location scheduled to open in this fall in Stockton, Calif.

What innovations you have created and used to build your company?
In 1990, I designed and implemented an incentive program to reward my highest-performing managers. This program was designed with the idea that my top managers would be rewarded with the possibility of becoming partners and part-owner of my next location. In these cases, general managers receive a guaranteed salary, 49 percent ownership, and profits split 50/50. Of my 18 stores, 10 of them have part-owners as a result of this incentive program.

What core values do you think helped you win this award?
Mainly an extremely hard work ethic. I'm not afraid to roll up my sleeves, put in the time, and prove myself from the ground up.

How important is community involvement to you and your company?
Very important. Our stores have relationships with local colleges and high schools, offering donations or supporting them with food and gift cards. I also take the "Every 15 Minutes" program to high schools where we encourage students not to drink and drive.

What leadership qualities are important to you and your team?
Mutual respect, mentorship, building relationships/friendships with staff. I've enjoyed longstanding working relationships with my employees--some for more than 30 years. On average, my managers remain with me for 10 years.