Jim Lager Has Become A Successful Franchisee And Mentor 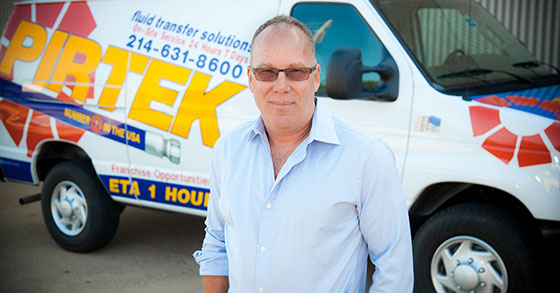 Jim Lager is not one to brag about himself, he'd rather shift the focus to his businesses. Over the years he's become adept at building strong businesses and creating environments where people excel. He admits he's "pretty good at taking lousy businesses and turning them into something." And, he's quick to add, "I'm not a 'maintain' kind of guy--I hire people to maintain. But helping people succeed is something I want to be remembered for."

Lager, a U.S. Army veteran and natural entrepreneur, knew he wanted to start his own business and work in a hands-on environment after his military stint in Germany. Back home, he earned an MBA from the University of Minnesota through the GI Bill, then signed on as Snap-On Tools franchisee in Plano, Tex.

As he grew his Snap-On business, Lager noticed the similarities between Snap-On and Pirtek USA, a mobile hydraulic and pneumatic hose repair brand. "I was looking for a business-to-business opportunity in Texas and was struck by the similarities in set-up, sales, and mobile service vans between the two franchises," he says. He was also impressed by the individual support Pirtek offers franchisees.

Lager took over a corporate Pirtek location at Dallas's Love Field. The 4,800-s.f. center surrounded by manufacturing and industrial customers was a solid choice in the growing area market. He now has three Pirtek units, along with his three Snap-On units.

"Jim continues to grow with Pirtek and has been a true asset to our franchise organization," says Gwyn O'Kane, vice president of franchise development at Pirtek. "He works with the corporate team on projects to improve the system and has spent weeks onsite at other Pirtek centers across the country to help fellow owners with their businesses. He understands his success is also dependent on other owners, and with his general franchising experience has become a great mentor to the Pirtek system."

While Lager will continue to grow his business, he's also looking ahead with another plan in mind. "In 10 years, I want to be at $10 million-plus in sales, but my ultimate goal is to have people in place to run my companies while I teach business and sales to others," he says. "I like to teach, but teaching doesn't pay well, so I do it because it feels good."

From Father to Sons: Building a business for the next generation
Rising Tide (Cleaners) "If your dream doesn't scare you, it's not big...
Sponsored
MassageLuXe Redefines the Meaning and Success of a Membership-Based...
How Multi-Unit Franchisees Are Solving Their Employment Challenges
Franchise Leaders Rank Their Greatest Challenges for 2023
5 Trends That Will Shape Employee Work-Life Balance in 2023