Richard Paek Promotes Communication from the Top Down...and Gets Results 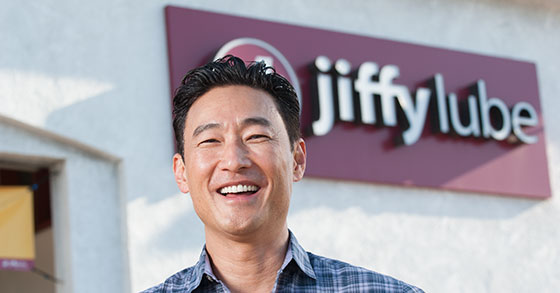 Longtime Jiffy Lube franchisee Richard Paek has discovered that seeing is believing. Paek, who opened his first Jiffy Lube in 1992, has built a multi-unit system that emphasizes transparency inside and out. If there is a sales, customer service, or employee performance stat to be had, Paek will use it to rank, reward, and motivate his team.

"'No sugarcoating' is one of our favorite quotes," says Paek, CEO of Newport, Calif.-based Allied Lube Inc., which operates 75 Jiffy Lube service centers in California and Texas.

This focus on sharing the facts with his 800 employees is paying off. With estimated annual revenue of more than $60 million, Allied Lube's growth outpaced the 2,000-unit Jiffy Lube chain by 9 percent in 2012, 7 percent in 2013, and is on track to three-peat growth in 2014.

While Paek contends there is no silver bullet to operating multi-unit locations, it starts with creating an infrastructure that promotes communication from the top down. "If you look at what we have been able to do, it is pretty amazing, " he says. "We worked on structure and morale. Our morale and teamwork are very high and we make sure we communicate efficiently and effectively throughout the entire company."

Paek has spent millions on store upgrades, signage, and advertising, but he contends it is the internal restructuring of his culture, communications, and daily operations that has fueled Allied Lube's growth. The company uses sales and labor data, car counts, mystery shopping, customer satisfaction survey results, and other objective data to award or deduct bonuses and rank stores. Employee favoritism by district managers is frowned upon and challenges among stores makes winning sweeter, he says. This way of thinking is particularly important to the younger generation, who want to have fun doing their job, be recognized for what they do, and love being ranked. Often, this spirit of competition is more about productivity and the pride of doing well than it is about money, he says.

Along the way, Paek discovered that high morale leads to high productivity. "Passion is something that is caught," says Paek. "We hire positive people who deal with employees in positive ways and recognize and reward positive statistics and productivity. When we focus on positive influences and positive reinforcement, we find the negativity falls off. I feel like we have done that well."

Paek learned the value of a strong work ethic early. Born in South Korea, he was a fifth grader when his family moved to California, and he watched his "highly educated" father toil seven days a week as a janitor, welder, taxi driver, and owner of a small mom-and-pop grocery store. Still, he was intrigued by the idea of being in charge of his own destiny.

After studying business administration at USC, Paek bought a printing company he sold three years later to fund his first Jiffy Lube franchise. He chose the brand after a year of researching brands and industries he believed were ripe for multiple units. His portfolio had blossomed to 113 stores, all financed internally, when he decided to sell stores in Colorado and California markets where he viewed growth as "tapped out." He turned his focus on Texas, where he continued to expand.

As his experience grew, Paek says he learned to work smarter and became a quick study of how understanding human behavior can benefit the bottom line. "When I started in this business I had a ton of energy, a ton of drive, and not a lot of experience and mentoring. I feel like I did everything on my own," he says. "The biggest thing I learned was working with people and through people and not stepping in their way so they can be productive--especially if you want to be larger."

Growth is definitely part of a 2015 business plan that includes the addition of at least 10 stores and the evolution of their leader as a coach as many long-term employees move up the ranks. Paek is embracing this supporting role as the mentor he never had, and you can bet he will continue to focus on the positive.

Understanding China 101 for Western Marketers
India: The Next Big Hot Spot for Global Franchisors?
Sponsored
Cannabis: The $25B Industry Is the Freshest Concept in Franchising
"Canadianization" Is Critical for U.S. Brands To Succeed North of the...
How To Improve Prospect Contact Rates: Get in the (Time) Zone!
Gyroville Lowers Its Franchise Fee from $25,000 to $9,995 and Sales Rise