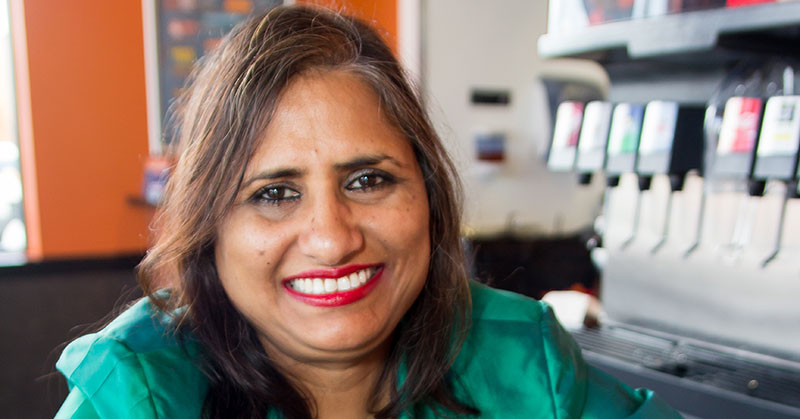 Renu Aggarwal bought her first Subway in Houston in 1997 with money she had saved.

Renu, who'd been a full-time homemaker, had saved funds from selling 22-karat gold jewelry from India wholesale to upscale jewelers in Houston and Dallas. She heard about Subway and franchising and decided that being a franchisee would be "lower-risk" than selling jewelry - a "golden ticket" sure to take care of their family in the future.

Despite her husband's initial hesitance, the mother of two, who had minimal English and some basic Spanish, went ahead with her plans. Today, she owns 55 Subways in Texas and New York and recently acquired another brand, Wing Zone, in Houston in order to diversify.

Her husband, who soon quit his job to join her in the business, is now a proud believer in her business acumen. The couple received All Stars of the Year awards from the Houston Subway Development Agent in 2009 and 2011, and she was named Businesswoman of the Year in 2012 by the South Asian Chamber of Commerce in Houston.

"In our business, my mother is the decision maker, and my father executes those decisions," says daughter Annie, who handles legal issues for the company. "I'm not surprised that she is a good businessperson though some of the extended family might have been at first. She's such a strong role model. In our family, she is the powerhouse. She has a lot of guts - she is not afraid of anything."

Renu insists that the success of the family business is due both to family members employed by the business - her husband, daughter, and son, Keshuv - and the more than 300 employees who have become like a second family.

"I treat the staff like family. Whenever they need help, I help them. They don't steal money from me because I will help them with family problems and they can pay me back when they have the money," she says.

"She really cares for the staff and some have worked for her for more than a decade and are continuing to grow," Annie adds. "When we opened our Wing Zone, they worked over and beyond for us because they are so attached to my mother."

Annie, who graduated from the South Texas College of Law in Houston, is gratified that the entire family can work so well together. "My brother, who has a degree in entrepreneurship from the University of Houston, is working to take on my mother's role, managing operations and people and making sure we have the infrastructure to run smoothly. He has also created his own internal software to increase data efficiency and analysis. We're incorporating that into our daily operations so that managers can conduct some operations in their stores via cell phone," she says. "I work with legal issues that come up, and since I also have an accounting degree, I look at financials, bringing in capital and making the network connections we need."

When Renu's son and husband were researching possible new brands, they liked the Wing Zone concept. "We flew to Atlanta to try to try it and liked it very much," she says. "It's a simple concept that we can easily incorporate into our infrastructure."

Now 51, Renu talks about retiring and letting her children operate the business. But they question it when she says that because she still has great ambition for her two brands. "I'd like to have 100 stores and a lot more people in the next five or 10 years," she says. "I may retire, but I'll still be making the decisions. I'll just call on the phone."

Understanding China 101 for Western Marketers
India: The Next Big Hot Spot for Global Franchisors?
Sponsored
The Ziggi's Way - No Franchisee Left Behind
"Canadianization" Is Critical for U.S. Brands To Succeed North of the...
How To Improve Prospect Contact Rates: Get in the (Time) Zone!
Gyroville Lowers Its Franchise Fee from $25,000 to $9,995 and Sales Rise