Alvaro Garcia Is On The Grow! 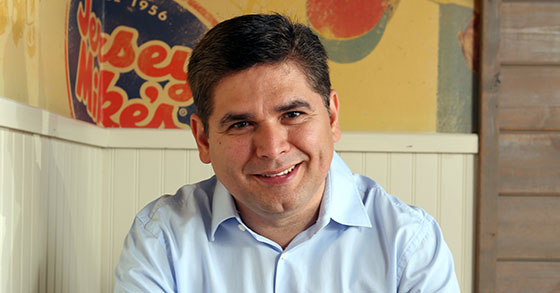 Alvaro Garcia already has 21 Jersey Mike's Subs locations in Southern California under his belt. And now he is in the midst of an aggressive 70-store development plan that matches an equally fierce work ethic.

The youngest of 10 children, Garcia was a teenager when he came to the United States from Managua, Nicaragua. He watched his single mother work ceaselessly at three jobs, seven days a week, including 12-hour shifts at a hospital on the weekend.

"She taught me to be honest, work hard, and not to depend on others," says Garcia, who got his start in the restaurant business (and his first job) at age 18 as a Domino's Pizza delivery driver in Alhambra, Calif. Within a year, he was managing that store and moved up the ranks quickly, first to supervisor and then to district manager. Opportunity continued to knock, and he became a franchisee.

"I came from a country where there was not a lot of opportunity," Garcia says. "In the U.S., it is clear that if you work hard for something you can make it happen."

And Garcia knows how to make it happen. When first contacted for this profile, Garcia had a development plan to open 50 Jersey Mike's stores. By the time the story wrapped, his plans had expanded to 70 sites. And his energetic, hands-on approach is perfectly suited to Jersey Mike's philosophy of recruiting owners who also are operators.

When Hoyt Jones, president of Jersey Mike's and a former Domino's executive and franchisee, invited Garcia to check out one of the sub stores in Los Angeles County, Garcia had no intention of investing in a second franchise brand. At the time, he was busy with his own Domino's stores, and business was booming for his painting and construction contracting company. Nevertheless, Garcia was immediately drawn to Jersey Mike's product, customer service, store image, and commitment to the community. His eagerness to gobble up franchise territory would make new inroads in the brand's quest to expand on the West Coast.

"I wanted to jump in," Garcia says. "At the time, Pete

Earlier in his career, when Domino's Pizza stores became available to franchise, Garcia recruited his co-workers--many longtime Domino's employees--to form a corporation for a 22-store portfolio so "everyone" could benefit from the $7 million deal. He did "everything from A to Z" to help the group succeed and eventually stepped back, keeping seven stores for his own. Garcia is proud of his self-made status and works with equal enthusiasm to mentor anyone who will listen.

"In the old days at Domino's a lot of people wanted to help me, but I wanted to do it myself. I worked 18-hour days, whatever it took to get the job done," says Garcia. "What I want people to know is that they can do it. What I preach to my own guys is that I started from the bottom and you guys can do it as well. Let me know the day you want to do it, and I'm here to help."

In 2013, he sold his seven Domino's franchises to focus on Jersey Mike's and has never looked back... except to regret not investing in the brand earlier. Garcia and his business partners (Victor Fiss, Joe Sanchez, and John Thomas) expect to have 25 stores open by year-end, with 10 to 15 in the pipeline annually in the coming years.

Garcia still operates his construction firm, which is actively involved in all the build-out of his restaurants. "We have gone through Jersey Mike's approved contractor class to ensure we meet the quality standards of the company," he says.

Garcia is bullish on the future as he reaps the benefits that accompany the solid infrastructure he has in place. "The stronger and bigger you get, the more control and say you have," says Garcia, who also serves as president of the co-op board for Southern California.

Garcia says that he always felt his time for success would come if he continued to work hard. And on any given day that he is on site, you can find him sweeping floors or cleaning tables.

Understanding China 101 for Western Marketers
India: The Next Big Hot Spot for Global Franchisors?
Sponsored
How to Control Your Brand Across All of Your Franchises
"Canadianization" Is Critical for U.S. Brands To Succeed North of the...
How To Improve Prospect Contact Rates: Get in the (Time) Zone!
Gyroville Lowers Its Franchise Fee from $25,000 to $9,995 and Sales Rise