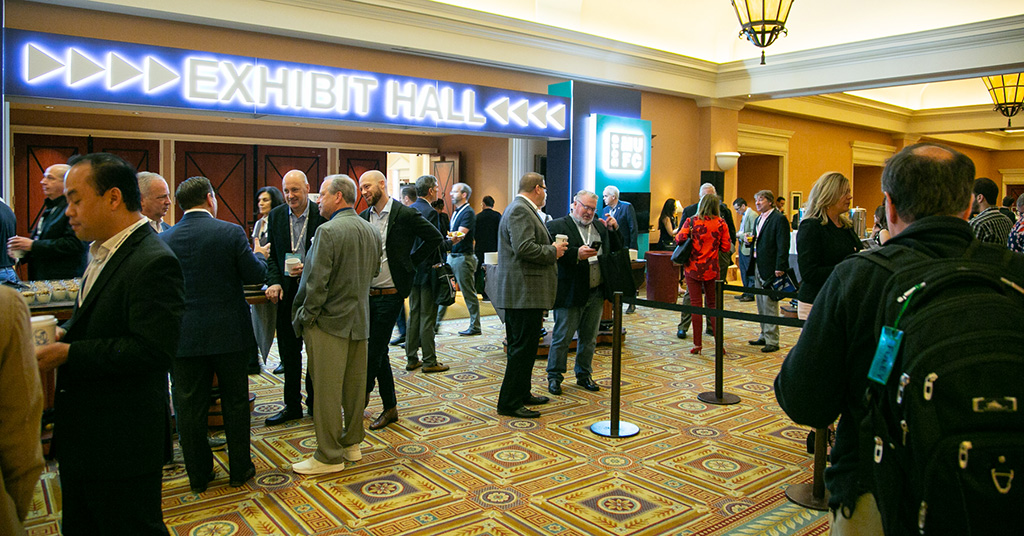 Some of the biggest and brightest multi-unit operators in the country gathered March 24-27 at Caesars Palace in Las Vegas for what has become franchising's must-attend event for multi-unit franchisees: Franchise Update Media's annual Multi-Unit Franchising Conference (MUFC). Whether they operated 3 units or 300, they came for the education, the networking opportunities, and a chance to visit with representatives from other brands, as well as vendors and suppliers.

As the doors swung open for the first general session, Franchise Update Media CEO Therese Thilgen welcomed the crowd of multi-unit operators and industry allies as they packed the room. "We had more than 1,720 registrations for the event this year," she said, the largest number in the history of the conference. "There are more than 650 franchisees representing almost 500 enterprises employing more than 250,000 people, and doing more than $9 billion in annual revenue." And representing more industries than at any previous MUFC.

Additionally, of those who responded to a questionnaire: 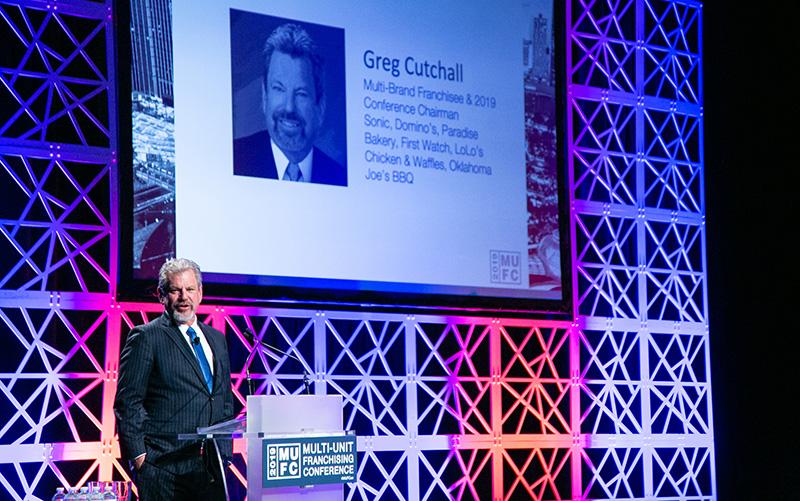 Next up was 2019 Conference Chair Greg Cutchall, who took the stage to offer his own welcome. In the world of restaurateurs, he is a bit of a legend in his hometown of Omaha, where he operates multiple Sonics, Domino's, and First Watch restaurants, along with a few concepts of his own. He thanked last year's co-chairs, Supercuts franchisees Cheryl and Joe Robinson, for their hard work and dedication.

Next up was the first keynote speaker, Chris Wallace, award-winning journalist and host of "Fox News Sunday." The keynote was sponsored by Inspire Brands. Wallace warmed up the crowd with several jokes about Washington insiders before digging into political subjects including the current administration and the just-released Mueller Report. "Was there collusion by the Trump administration? No," he said. "Was there obstruction of justice? Perhaps." He also spoke about what he called "the biggest moment of my career," when he moderated the final presidential debate between Hillary Clinton and Donald Trump in 2016. 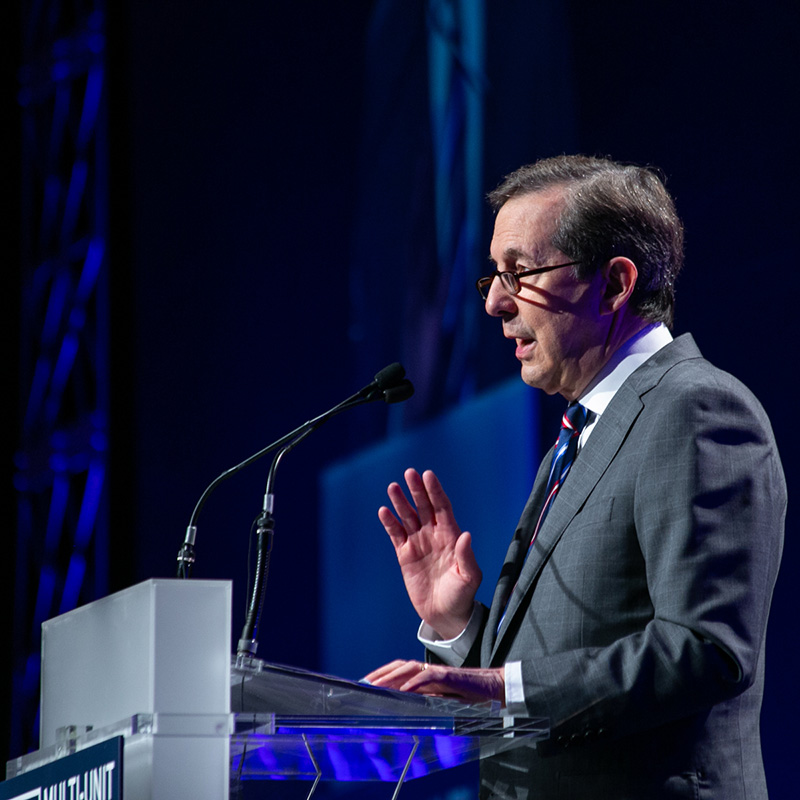 The general consensus among the panel was that the franchise space is still flush with capital and multiples are strong, perhaps too strong at present. "There are some eye-popping valuations out there today," said Branca.

Hashim noted the importance of unit economics. "Good unit economics are essential in today's market," he said. However, Tarantino noted, potential outside investors remain more interested in top-line sales than in the business model or unit economics of franchise brands and franchisee organizations.

New to the conference this year was a room set aside for one-on-one meetings between franchisees and finance and real estate experts to discuss problems and solutions confidentially. The Finance & Real Estate (FIRE) Pavilion was open during the first two days of the conference.

The afternoon ended with the Opening Network Reception in the Exhibit Hall, this year filled with more than 200 booths offering franchise opportunities, products, and services.

Continental breakfast (and coffee!) awaited attendees eager to gear up for the conference's second full day. Franchise Update Co-Founder and Chairman Gary Gardner welcomed attendees to the general session before turning the stage over to the day's first keynote talk, sponsored by Pronto Insurance. 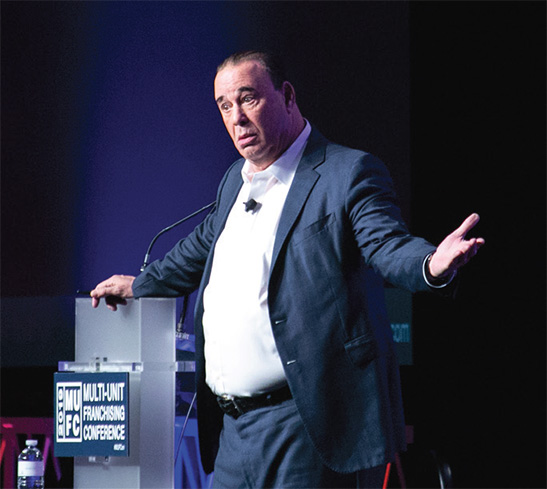 If anyone needed more than coffee to wake them up, Jon Taffer was their guy. Entrepreneur, bestselling author, and host of TV's "Bar Rescue" show, Taffer kicked off the day with a bang. He began by explaining how he uses anger (his) as a tool to wake people up to see--and change--their behavior to achieve the results they want. He said the TV show was not so much about bar and restaurant rescue as it was about people rescue.

One lesson he learned from the show was that the common denominator of failure was excuses, the inability of people to own their actions, accept responsibility, and move forward. "Accountability is #1 with me." Another was about speed to make changes. "None of you do it as fast as you can," he said. "Waiting is what hurts you. Plan for it. Go forward."

He also introduced his idea of Reaction Management. "The reaction is your product," he said. Chefs are not preparing a meal, they're preparing a reaction, he said. If there's no reaction when the meal is placed in front of a customer, it failed. "The ones who create the greatest reactions win. Turn your company into a sales and reaction machine," he exhorted the crowd.

Next up was one of the conference's most anticipated events: the announcement of this year's MVP (Most Valuable Performer) Award winners--franchisees who are leaders in their organizations, their brands, and their communities. The presentation was sponsored again this year by American Family Care. See page 10 for profiles of this year's winners.

The awards were followed by the annual "State of the Industry" presentation by Frandata CEO Darrell Johnson. Overall, his presentation offered a cautious optimism, though he mentioned slowing global economies (China and Europe) and flat consumer demand.

For 2019-2020, he said, the "Goldilocks era," where business conditions are just right, will continue a while longer. "The low cost of capital is driving three franchise trends right now: brand diversification for multi-unit operators, an increasing focus on operator efficiency, and mergers and acquisitions of brands and franchisees." Still, he said, "The air is going out of this balloon."

On another front, he addressed the role of franchising in solving the problem of skilled vs. unskilled labor in this country. He challenged the marketing and advertising people in the room to reframe and reassess what franchising is, and its role in the nation's economy.

"We have allowed the brand of franchising to be defined by others. Yet you in this room have launched more than 1 million careers," he said. "We're already doing the very thing that is missing in employment circles: teaching fundamental skills like teamwork, training, computer literacy, and customer interaction. You are doing exactly the things this economy needs." The problem, he noted, is getting this message out to the public, to legislators, and to the media in an effective way.

Next up was a timely general session panel called "Attract, Recruit, & Retain in a Tight Labor Market." Supercuts franchisee Gary Robins moderated a panel consisting of Matt Haller, senior vice president of government relations and public affairs at the IFA; Keith Miller, Subway multi-unit franchisee and former chair of the Coalition of Franchisee Associations; and attorney Michael Lotito, labor counsel to the IFA and co-chair of Littler's Workplace Policy Institute. Panelists discussed issues ranging from federal issues such as joint employer and overtime rules to state and local regulations affecting employers and employees alike, such as minimum wage.

"Some decent things are happening," said Lotito, who expects a favorable outcome this fall regarding joint employer rules. He also expects a "pretty good" ruling on overtime pay and hours. "The real challenge is how do we keep them happening? How do we write a rule that will be sustained if Trump is not re-elected?"

Miller, whose Subway stores are in California, raised a cautionary flag about ongoing minimum wage hikes. He said wages are up $30,000 per year for his three stores. "And I'm just a little guy. It affects our business model. And when we raise prices, franchisors get a bigger raise than we do," he said. "We have to concentrate on efficiencies. We must do the same with fewer labor hours." Eventually, he said, falling unit margins are not sustainable. And, he added, if some larger franchisees fall below their loan covenants, it could spell danger for their franchise systems. 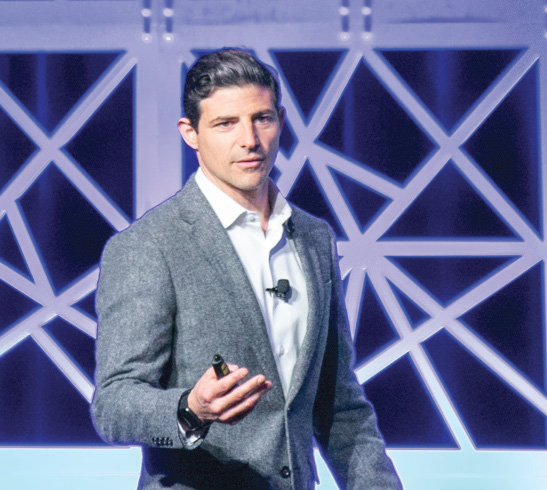 After this sobering discussion, attendees were treated to the inspiring story of what's come to be known as the Thai Cave Rescue. ABC News Chief National Correspondent Matt Gutman told the riveting story of the rescue of 12 Thai boys and their soccer team coach trapped in a cave complex in Thailand for 18 days. Gutman, who was on the scene when a rescue seemed bleak, if not impossible, told a story of human spirit, survival, and inspiration. His on-the-scene knowledge and photos of the ordeal had attendees on the edges of their seats until it was past time to break for lunch. (And yes, his book on the rescue came out in November.)

The Exhibit Hall opened its doors one more time for a closing networking reception and a final chance to check out new brands, suppliers, and connect with fellow franchisees.

The closing morning session, Build Your Franchisee Action Plan for Legislative Advocacy, focused on how franchisees can get involved in protecting and promoting the franchise business model. Franchisees were urged to get involved in educating their elected officials and shaping future legislation on the local, regional, state, and federal levels.

Each panelist shared their own stories of how they became so involved and how they learned to participate in local and national politics, offering advice on how other franchisees could--and should--get involved. The discussion made its way from NLRB joint employer rules and frivolous ADA lawsuits to the critical labor shortage and rising minimum wages.

The 2020 Multi-Unit Franchising Conference will be held April 13-16 at Caesars Palace in Las Vegas. Find more at www.multiunitfranchisingconference.com.