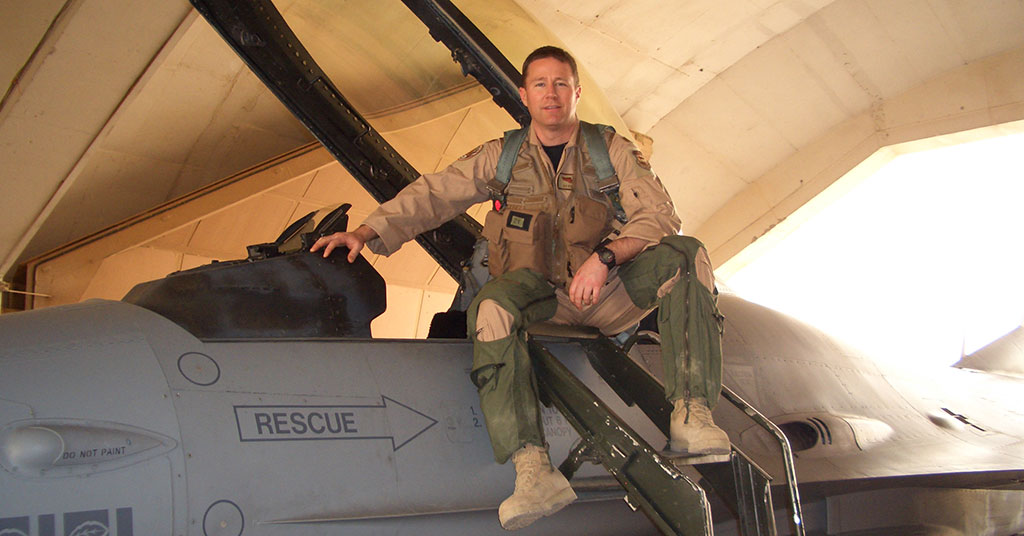 Kevin Kelly, a decorated fighter pilot, credits his 25 years of active duty for his strategic focus on the big picture in his multi-unit franchise business.

“The ability to think strategically and on a large scale is something many people struggle with,” says Kelly, a combat veteran with multiple tours in the Middle East. “When you are in the military, you generally deal and operate on big scales, so translating this into a business just comes naturally.”

Kelly, the 2017 MVP Veteran Entrepreneurship Award winner for outstanding performance and leadership by a veteran, served in both the U.S. Navy and Air Force before teaming up with two friends 6 years ago to invest in Planet Fitness. Today the partners operate 19 gyms in Phoenix, with expansion plans under way in Washington and Mexico.

While the playing fields are different, Kelly often takes a page from his military days when managing his franchise operations. When it comes to day-to-day operations, he says, the key is to understand the difference between tactics and strategies.

“As a leader in your company, your day should be filled with events and decisions dealing with where your company will be in 5 to 10 years—strategic in nature,” says Kelly. “If your calendar is filled with meetings about day-to-day activities, you’re most likely mired in tactics, and the future vision and trajectory of your company will be dictated by outside forces. That is a place you do not want to be, but most people get stuck in that type of thinking. I always remember a quote from the ancient Chinese general, Sun Tzu: ‘Strategy without tactics is the slowest route to victory. Tactics without strategy is the noise before defeat.’”

During his time as a Navy officer and A-6E Intruder pilot, he was responsible for the leadership, training, and development of more than 250 enlisted sailors. After graduating from the Naval Justice School with honors, he also served as squadron legal officer and was selected for an inter-service transfer to the Air Force, where he earned his F-16 Instructor designation. Kelly says he has tried to take something away from every leader he came into contact with early in life, a habit that carried on into the military.

Truly outstanding leaders, he says, put their people before themselves and tie everyone’s success to the overall success of the squadron. “Everyone knew their role, knew what was expected of them, and were rewarded for superior performance when they rose to that level,” says Kelly.

His takes the same leadership approach with Planet Fitness to focus on cultivating leaders. “You have to develop your leaders on purpose,” he says. “If you aren’t deliberate in growing leaders within your organization then, once again, you are leaving the future strength and stability of your company to chance.”

When it comes to the future growth of his company, Kelly is leaving nothing to chance. His plans include continued expansion of the Planet Fitness brand in the U.S. and internationally, and the addition of two complementary franchise brands, The Joint and Modern Acupuncture. In May, he signed a regional development agreement with The Joint, a fast-growing chiropractic franchise, to help develop up to 20 new clinics in Washington.

“My new partners and I are very excited about these two concepts, and plan on opening them in adjoining spaces whenever possible, as we see tremendous synergies in these exciting brands,” he says. “Keep an eye out, as I think both will be incredible success stories.”

Kelly says he is honored to receive the MVP award and hopes his story will encourage fellow franchisees to consider hiring veterans as a smart investment. “I hope most multi-unit franchisees recognize these skills in our veterans who may be applying for positions inside their organizations,” says Kelly. “Consider hiring a veteran. I can pretty much guarantee you won’t regret it.”

Key accomplishments:
Surviving 25 years as an active duty military fighter pilot. Creating a business from nothing. Coming back from the brink of bankruptcy. Producing a documentary movie. Landing on an aircraft carrier at night. Marrying my wife.

Work week:
55 to 70 hours, but really always at work, unless I shut it down or unplug.

What are you reading?
Economics in One Lesson by Henry Hazlitt.

Best advice you ever got:
1) Habits eat will power for breakfast. 2) The majority is always wrong.

What’s your passion in business?
Creating a business from the ground up, creating opportunity and wealth for others, allowing leaders to lead.

Business philosophy:
The best decisions are made at the lowest level in an organization.

Management method or style:
Describe an extremely detailed future picture for your company, then get out of the way and let your talented people paint it for you. Provide small brushstroke corrections for them as they create the masterpiece for you (and themselves).

Greatest challenge:
Articulating to the organization where it is we want to be in 5 years, and keeping them focused on that lighthouse.

How do others describe you?
Having an almost pathological aversion to dysfunction.

How do you hire and fire, train and retain?
Hire who you think is the best at the time, let them learn and then lead. If you need to fire them, you’ve most likely failed them, not the other way around. Retain your people by giving them the runway required to fly, and then tie their success to your success.

Growth meter: How do you measure your growth?
Home-grown leaders who now have an equity stake in whatever we are doing at the time.

Vision meter: Where do you want to be in 5 years? 10 years?
In 5 years, 60 stores in the U.S. and Mexico, with another 60 in the queue. In 10 years, vigorously pursuing and executing on the best opportunities that will inevitably present themselves.

What are you doing to take care of your employees?
Trying to have as many leadership positions available for the leaders we grow in-house. It’s perhaps our biggest challenge. We have an outstanding director of training and development, Jeff Maguire, whose primary duty is to identify, train, equip, challenge, and place our own people into leadership roles. Once in that role, they immediately know what is expected—but more important, what and where their next leadership position resides. They are always focused.

What kind of exit strategy do you have in place?
Death or an 8X EBITDA offer, whichever comes first.