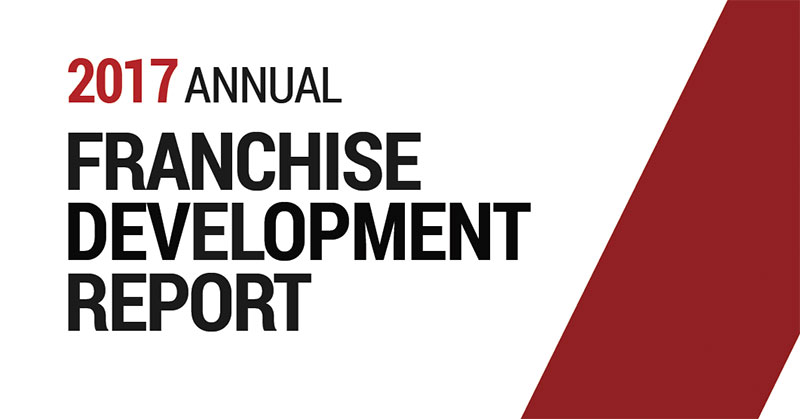 Results from the 2017 Annual Franchise Development Report (AFDR) were unveiled in late September at the 18th annual Franchise Leadership & Development Conference in Atlanta. The 2017 AFDR is based on responses from 167 franchisors representing 60,989 units (51,789 franchised and 9,200 company-owned).

Participants in the survey consisted of franchisors that completed an online questionnaire. Responses were aggregated and analyzed to produce a detailed look into the recruitment and development practices, budgets, and strategies of a wide cross-section of franchisors. The data and accompanying commentary and analysis provide the basis of the 2017 AFDR.

Highlights from the report were presented in a general session at the conference by Franchise Update Media CEO Therese Thilgen. Among her observations based on the AFDR data were:

Growth plans for 2017 from the 167 respondents target a total of 6,536 additional franchise units, 1,966 through existing franchisees and 3,843 from new franchisees. For comparison, last year's growth plans from 134 brands targeted a total of 6,442 additional units; and for 2015 those numbers were 6,063 total new units from 139 brands.

Below are additional highlights from the 2017 AFDR. Ordering information can be found at the bottom of the page. The following are 10 of the most important things the more successful brands have seen or done that make their franchise offering more attractive to prospects and candidates:

The 2017 Annual Franchise Development Report (AFDR) delivers data collected from 167 franchisors representing 60,989 units, with responses organized by industry, unit investment, system-wide sales, and more. The annual report provides franchisors with the ideal tool for studying their development practices, benchmarking their sales and recruitment budgets against their own industry categories, and setting goals and budgets for the year ahead. The report also includes research into online recruitment practices, the growing use of mobile and social tools by prospects, and best practices by franchisors.

The 2017 AFDR is packed with timely information and benchmarking data that can help your franchise system grow faster and close more deals--while saving thousands of dollars in cost per sale. Based on in-depth surveys from 167 franchise companies, this thoroughly researched report reveals the success drivers that are sure to boost the output and quality of your sales department.

Filled with the most comprehensive sales and lead generation data in franchising, the 2017 AFDR, at more than 190 pages, is a must-buy tool for franchisors, development consultants, and advertising, marketing, and technology suppliers--and is ideal for benchmarking and building budgets and media plans.

The complete 2017 AFDR, with analysis and benchmarks, is available for $350. For ordering information, call Sharon Wilkinson at 800-289-4232 x202 or email afdr@franchiseupdatemedia.com.