A&W Restaurants Returns to Singapore After 16 Years Away 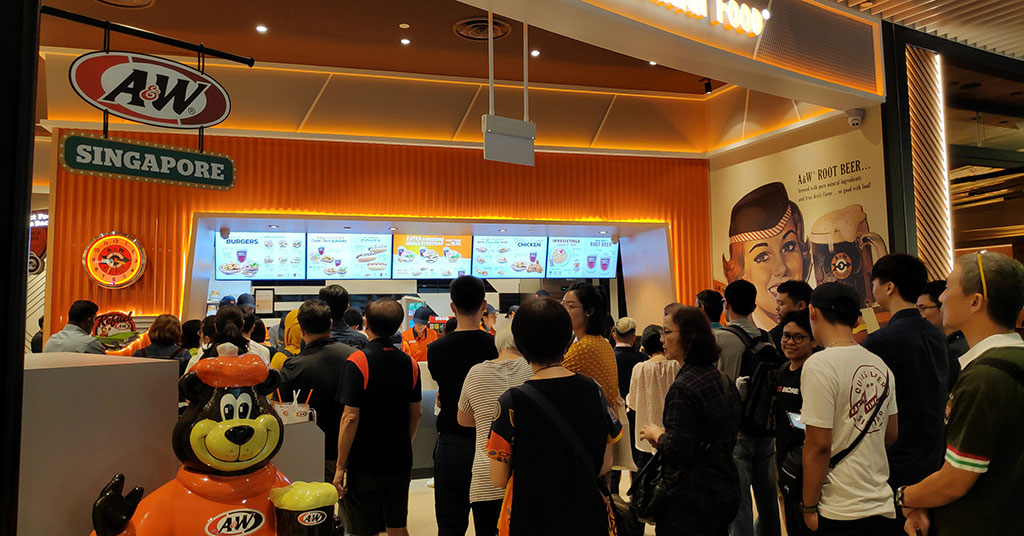 After a 16-year hiatus, A&W Restaurants returned to Singapore in April, opening a company-owned flagship restaurant in the country's new Jewel Changi Airport. The airport is both an urban center for local residents and an international hub. Open 24 hours, the 80-seat A&W is testing menu and service initiatives to be used in future locations in the country.

A&W's history in Singapore traces back more than 50 years. In 1966, A&W was the first U.S. quick-service restaurant to enter the country. Apparently, it has not been forgotten: during opening week, guests waited up to 3 hours for the brand's signature Root Beer Floats and Coney Dogs, as well as other "all-American" and regional favorites.

The new location is the latest of at least 45 international and domestic locations the company expects to open this year -- 35 of them across Southeast Asia, where A&W is focusing much of its international expansion.

This time, said Kelvin Tan, director of marketing and communication for A&W International, the company intends to stay and is planning to open a second restaurant in the country in June, with a third scheduled for next year.

The Singapore outlet is managed directly by A&W Restaurants. "We could have easily gone for a franchising concept... but as a company-owned store, it offers us greater control over what we want to do for the menu," said Tan in local publications.

One of those plans is to cater to the local Muslim community, which accounts for about 15% of the country's population, or about 1 in 7 people over age 15. "The Muslim community formed a very big chunk of our business, and I think right now we will continue to respect and recognize that this particular market is very important to us," said Tan. He said the menu already is "Muslim friendly" with no pork or lard, and that A&W plans to seek halal certification with the Islamic Religious Council of Singapore.

This growth push comes as A&W prepares to mark its 100th anniversary (June 20) with its Second Century Growth Initiative. In the U.S., A&W has 17 franchised U.S. restaurants in various stages of development, with five set to open in May and June. Two new franchisees recently signed agreements for restaurants in Las Vegas and Tonopah, Nevada, with the Tonopah A&W the brand's first hotel and casino location. New development agreements also were signed earlier this year for Bingham Lake, Minnesota, Prescott Valley, Arizona, and Yermo, California.

Earlier this year, A&W announced an incentive plan consisting of lower royalties for new U.S. franchisees. There are currently more than 960 A&W restaurants worldwide, 597 in the U.S. and 372 in Asia.

"Since A&W franchisees acquired the company in 2011, we've been working to rebuild the brand worldwide," said CEO Kevin Bazner. "The amazing responses to our Singapore return, combined with the interest we are seeing from new U.S. franchisees, clearly show that A&W is a second-century growth brand."

Editor's Note: Kevin Bazner will be profiled in the next issue of Franchise Update magazine, due out in late May/early June.

Celebree School
At Celebree School, our child care franchise delivers a safe, nurturing, friendly, state-of-the-art learning environment that fosters a solid...
Unity Rd.
Get A Piece Of The Booming Cannabis Market Without Headaches.
Cold Stone Creamery
Own one of the world's most beloved ice cream franchises! For nearly 35 years Cold Stone has been the go-to for the Ultimate Ice Cream...
Central Bark
Want to become a part of one of the country’s fastest-growing industries? Check out Central Bark's doggy day care franchise opportunities!
Drybar
The Drybar® brand, the category creator and a leading blow dry bar salon franchise, is seeking qualified owners.
Share This Page