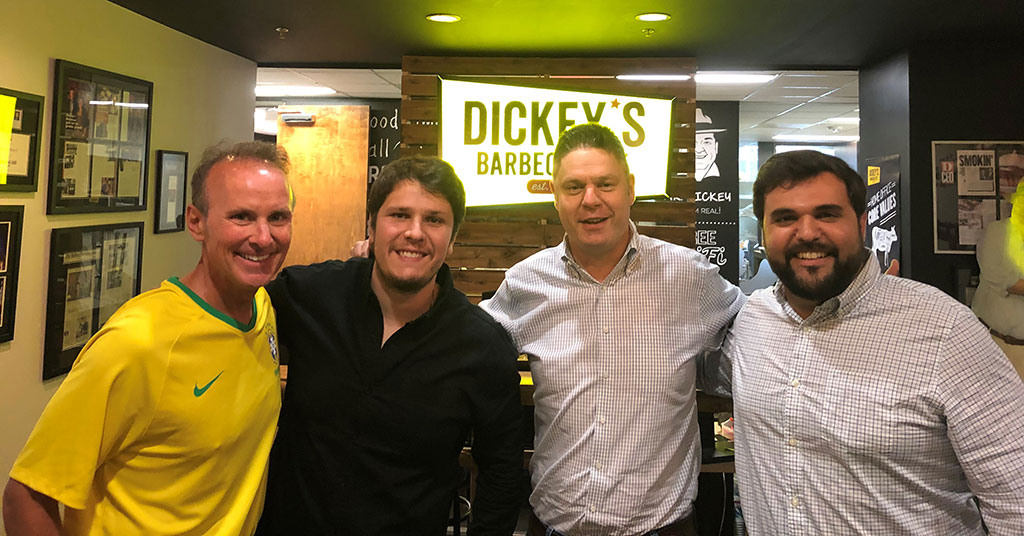 What with all the Brazilian-style steakhouses popping up across the U.S., Dickey's Barbecue Pit is returning the favor by bringing its Texas-style barbecue to South America with a 100-unit deal, its first foray onto the continent.

The mega-deal, with business partners Bruno Gallucci and Cyro Pires, is to develop those 100 locations throughout the country. Brazil, with an area of 3.2 million square miles (compared with 3.8 million for the U.S.) and a population of nearly 210 million, is the largest country in South America.

Dickey's new partners share a diversified entrepreneurial background and have more than a decade of experience in restaurant operations and agricultural production. The partners acquired full franchising rights for Brazil and are slated to open their first location in early 2020 in their hometown of Sao Paolo, the country's largest city, with a population of 12 million.

"Bruno and Cyro share a passion for their community and the art of great barbecue, and we look forward to our new partnership," said Roland Dickey, Jr., CEO of Dickey's Capital Group.

"Whether you're with friends or family, it's all about barbecue in Brazil, and for us it's about giving our country the Dickey's experience," said Gallucci. "The Dickey's vibe and atmosphere are what made us fall in love with this concept."

"Our new partners bring an unparalleled level of enthusiasm, business acumen and experience with Brazilian barbecue culture," added Jim Perkins, VP of International Development for Dickey's. "We're thankful to have such knowledgeable and collaborative partners as Dickey's embarks on this new frontier."

Elements Massage
When simplicity is the essence of your business model, clients and owners benefit. Clients want a predictably wonderful experience with every visit....
Premier Martial Arts
Premier Martial Arts is excited to help entrepreneurs with a passion for martial arts become a meaningful part of their community.
Ace Hardware
Ace is #1 for convenience hardware! You pay no royalty fees. Instead, Ace pays you a year-end rebate based on your annual purchases. Enjoy the...
Unleashed Brands
Unleashed Brands has consolidated the world’s best brands that service families under one roof.
East Coast Wings + Grill
Start your own one of the fastest-growing chicken hot wing franchises. East Coast Wings & Grill is an award-winning wing restaurant franchise...
Share This Page