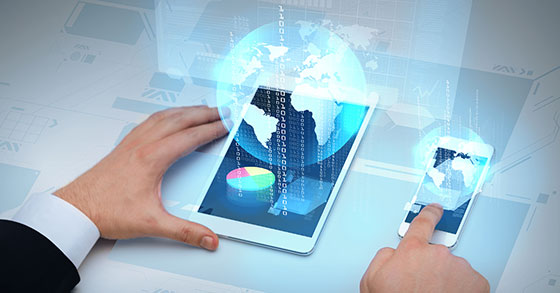 Throughout modern history, periods of heightened innovation and technological advance were followed by a relatively radical step up in the human condition as new industries, processes, routines, and services became commonplace. In the mid- to late-1800s, the United States became truly united with the completion of the transcontinental railroad and interconnected waterways, while subsequent advances in electricity, plumbing, engineering, and medicine accelerated the efficiencies of life and business dramatically.

Recent advances in such things as robotics, computer processing and storage, sensors, materials science, and synthetic biotechnology have brought us to the verge of another new era, one with significant long-term implications for investors. While many of these technologies have been around for decades, recent progress has brought us to a critical point of convergence, teeing up the global markets for intense change. In much the same way that multiple tributaries come together to form a mighty rushing river, we expect this convergence to vastly change and drive the world to a new and higher plane.

The bulk of these developments are beneficial to emerging economies, which can use new technological advances to leapfrog developed countries that have aging installed infrastructure. If deployed correctly, these technologies could benefit people across the world, transforming nations and moving billions of people into the global middle class.

While computers have been around for decades, their applicability and ubiquity have been driven by steep declines in price and size, and increased processing power. Today's $400 iPhone, for example, contains the same processing power that a $5 million supercomputer did in 1975.

Similarly, inexpensive access to data has altered all sorts of daily interactions, jobs, and job descriptions. Thirty years ago, we used encyclopedias and libraries to find information. Today, Google responds to 6 billion inquiries a day, and Wikipedia is a constantly improving, a richer trove of free information than even the most complete encyclopedia set was a decade or two ago. The era of Big Data is here and we have only begun to exploit its implications. We don't just have chemists and biologists, we now have a need for data scientists. We've moved from servers to the cloud, where good credit and a great idea can launch a business in a matter of days.

One of the most important attributes of all of these changes is that they are distributed broadly and facilitate many applications for social interactions. While many decry the fact that in-person interactions are being changed by technology, the flip side is the increasing ability to connect with an ever-broader pool of family, friends, co-workers, and others. Government agencies such as NASA regularly "distribute" challenges and problems on the web for scientists and casual problem-solvers alike to noodle on. Social media, the Internet, and services like FaceTime, Instagram, Pinterest, and Facebook allow for the nearly instantaneous--and sometimes viral--transmission of ideas. Take the recent "ALS Ice Bucket Challenge" for example, which took Facebook by storm, ensnared the current and several former U.S. presidents, and quickly raised tens of millions of dollars. Industry after industry has been irrevocably changed by converging technologies. Here are just a few examples:

What's ahead for investors

These advances are exciting for consumers, business owners, and investors alike. Unfortunately, given the pace of change, it is tough to predict with any specificity precisely how they will all play out--particularly when it comes to investment implications.

Many benefits are likely to accrue to large, well-heeled and cash-rich old line companies that can adapt and adopt quickly. Similarly, investing in cash-rich technology companies with active research arms and numerous investments in new technologies is probably a safer way to play transformative technologies than trying to "bet" on a single IPO. Change and creative destruction are part and parcel of a free market society. While those can be frustrating for individuals caught in the gears of that change, they are a necessary force in moving the entire system ahead.

At the turn of the 1900s, if the U.S. had focused on subsidizing dying buggy whip and wagon wheel industries at the expense of spending on electrification, enhanced manufacturing, and plumbing, think how vastly different subsequent decades may have played out. Similarly today, the core need for investors, employees, and citizens in general is to stay watchful and nimble as implications of convergence present themselves in the years ahead.

My full perspective on "Convergence: Transforming technologies in the early 21st century" can be found on the insights page of the abbotdowning.com website.

Carol M. Schleif, CFA, is regional chief investment officer for Abbot Downing, a Wells Fargo business that provides products and services through Wells Fargo Bank, N.A. and its affiliates and subsidiaries. She welcomes questions and comments at carol.schleif@abbotdowning.com.

Understanding China 101 for Western Marketers
India: The Next Big Hot Spot for Global Franchisors?
Sponsored
Robeks Set to Soar to New Heights with Captive Growth
"Canadianization" Is Critical for U.S. Brands To Succeed North of the...
How To Improve Prospect Contact Rates: Get in the (Time) Zone!
Gyroville Lowers Its Franchise Fee from $25,000 to $9,995 and Sales Rise

Perkins Restaurant & Bakery
The opportunity to grab a slice of the pie and partner with Perkins Restaurant & Bakery, a tried and true concept, is ready for the taking for...
Cash Required:
$600,000
Learn More
PetWellClinic
PetWellClinic is a walk-in veterinary clinic offering basic health and wellness services to dogs and cats. PetWellClinic is the first vet clinic...
Cash Required:
$250,000
Request Info
Added
Learn More
Share This Page