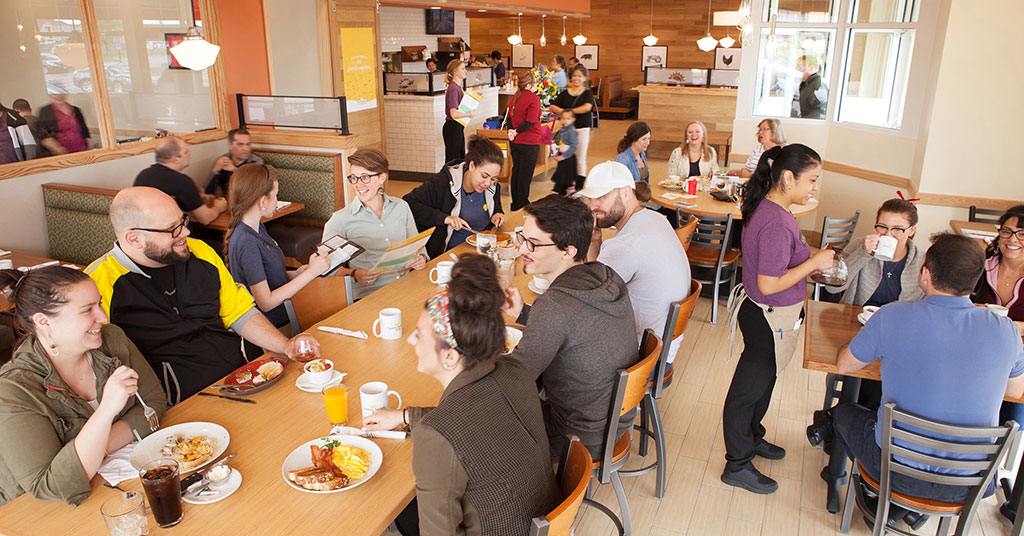 Sunny Street Café is shining bright with a new interior look for the fast-growing chain that is celebrating its 10th anniversary as a welcoming spot for breakfast, brunch, and lunch.

The Ohio-based casual dining franchise unveiled a prototype of the modernized interior layout and décor in its own backyard with the recent opening of the newest Sunny Street Café in Columbus.

"It was important to us for this to be an evolution, not a revolution," says Mike Stasko, vice president of brand strategy. "Our customers have said they like Sunny Street because it is bright and welcoming.  We wanted to retain that, so the new prototype is very bright, lots of windows and light colors. It still feels very warm like a Sunny Street."

The prototype was a year in the making and the first major interior change since the chain was founded a decade ago. Sunny Street Cafe now has 18 restaurants in Ohio, Texas, Missouri, Alabama, and Edmonton, Alberta, serving up all-day breakfast, lunch, and full-service catering, a burgeoning business for the brand. The design firm was charged with "modernizing and reimagining" the entire layout and interior look of the existing restaurant.

"It was time," says Stasko, of the new prototype. "Some of the restaurants are turning 10 years old this year. We wanted to evolve the look to reflect all we have been doing with our menu and service."

Great care was also taken to keep popular décor, such as the community wall for local schools, and put a new "spin" on aging restaurant elements with brand equity. Pinewood wainscoting, for instance, has been transformed into a new wood feature wall on one side of the restaurant.

Changes are brewing behind the scenes too.

The prototype houses a streamlined kitchen, with a galley-style layout to increase efficiency and reduce energy consumption. Updated features include under-counter refrigeration on the grill line, rapidly heating induction burners, and energy saving lower ventilation hoods. A separate prep station has been added to support the brand's busy catering business.

The franchisor plans to roll out the new look in Sunny Street Café restaurants under development and is creating a retrofit package of the fresh changes for existing franchisees. If sales at the newest café are any indication, the future is bright. The Columbus restaurant, the eighth breakfast-lunch café in Central Ohio, broke opening volume records for the brand, Stasko says.

"The direct customer feedback, reviews, and responses have been phenomenal," says Stasko. "We have been fortunate to experience tremendous success, particularly over the last three years. We wanted to make sure we stayed true to what has gotten us here. We see the new prototype as icing on the cake to provide us with incremental growth with new customers, who are demanding more in terms of the dining experience."