Smoke's Poutinerie on a Quest for GLOBAL DOMINATION! 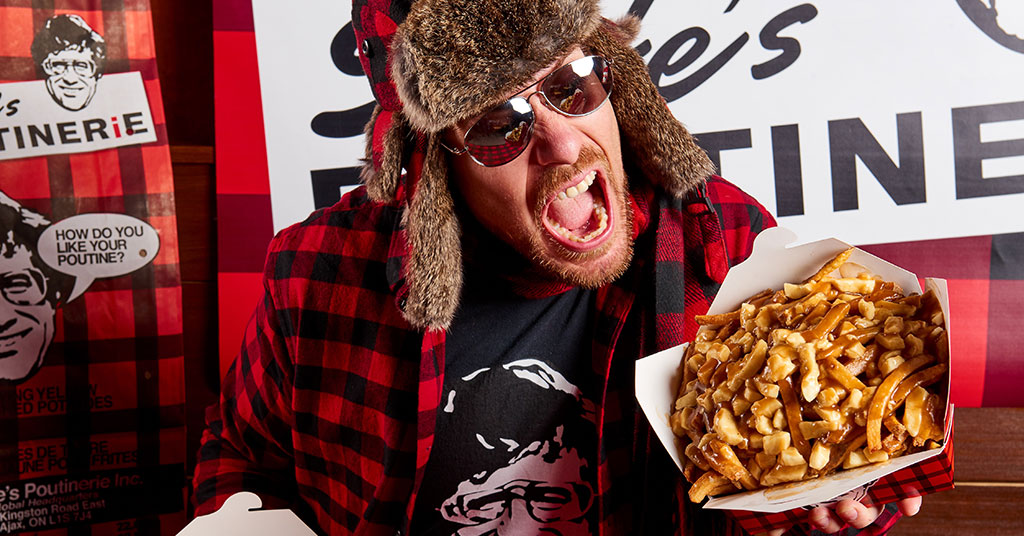 Canadian entrepreneur Ryan Smolkin’s master plan for Smoke’s Poutinerie is as weird, wild, wacky, and seriously strategic as the original idea for his unique brand – and the creation of a whole new quick service food category – to bring loaded fries to the masses through franchising.

“GLOBAL DOMINATION! Baby,” Smolkin says resoundingly, his voice in high gear when describing the brand’s mission.  “We are an Entertainment Company on a mission for GLOBAL DOMINATION! Our ultimate goal is to be in every city and every country in the world!”

Ryan Smolkin, former owner of a globally recognized branding and design company, is now building and leading the “World’s Largest & Original Poutinerie” as Founder and CEO (Chief Entertainment Officer). Smolkin is on the fast track to aggressive expansion, armed with a contagious passion for the brand, built around a broad menu of Canada’s iconic dish – fresh cut fries, squeaky cheese curd, and piping hot gravy.

“What we have done is brand Poutine and create an entirely new food category called Poutinerie,” explains Smolkin. “It’s loaded fries. The base is French fries, cheese curd, and gravy, topped with endless options, you can pile whatever you want on top!”

Founded by Smolkin, with no franchising or restaurant experience in late 2009, Smoke’s Poutinerie has 150 locations coast-to-coast in Canada and 50-plus open and in development in the United States.

Foodies everywhere are rejoicing.  Since day one, when the first Smoke’s Poutinerie opened in downtown Toronto, huge crowds have greeted the brand, excited to experience the authentic Canadian vibe, served up with signature lumberjack plaid and 80’s Glam Rock tunes, complete with a mythical (or is he?) gastronomical brand figurehead, known as “Smoke”.  “Smoke is….The Man, The Myth, The Legend, he is the visionary behind our Brand,” adds Smolkin.

Smoke’s Poutinerie is more than fries, curd, and gravy…it’s a brand and it’s an experience,” notes Smolkin. “We are an entertainment company and you can expect to see us bring our WEIRD, WILD + WACKY Rock N Roll Stage Show to Plaid Nation Fans around the world!”

Introduced in the U.S. in December 2014, the brand has strategically expanded on both coasts, including parts of southern and northern California and places like Philadelphia and Ann Arbor, Michigan, the first of many college towns planned for development.

The brand, Smolkin says, was born to appeal to those 18-to-25-year olds who embrace and indulge in the menu’s 30 poutine variations between the hours of midnight to 4 a.m. Future cross-country growth will target hot spots with a strong downtown urban core. Think Boulder, Colorado, Nashville, Tennessee, and Austin, Texas.

Passive investors need not apply to board Smolkin’s self-described “Gravy Train.” The company looks to partner with hands-on franchisees.

“People are always asking, ‘What is my return?’,” remarks Smolkin. “Fine, I can answer all that, but if the return is your first question coming in, you’ve already lost the bid on the stage. We want people who believe, breathe, eat, preach, and LIVE the brand!  It’s all about finding people who want to be a part of our family, be part of our culture, understand what we’re all about, and want to take the brand to a whole new level themselves – in their city, their territory, or country – wherever it be.”

“All these insane different revenue streams,” Smolkin says. “You start to do the math. It is not just the four walls. It is taking it to the people through mobile, venues, and entertainment centers.”

With U.S. expansion at full speed, the gregarious founder is gearing up to go international with his lumberjack plaid message of GLOBAL DOMINATION!

“The dynamite has been lit and we’re ready to ROCK N ROLL with the infrastructure, development, and legalese done for UK, Australia, and Middle East, with the Asian market and Europe as the other two pockets,” Smolkin says. “Outside, the U.S. and Canada, these are my five next big targets for development. The explosion is about to happen!”