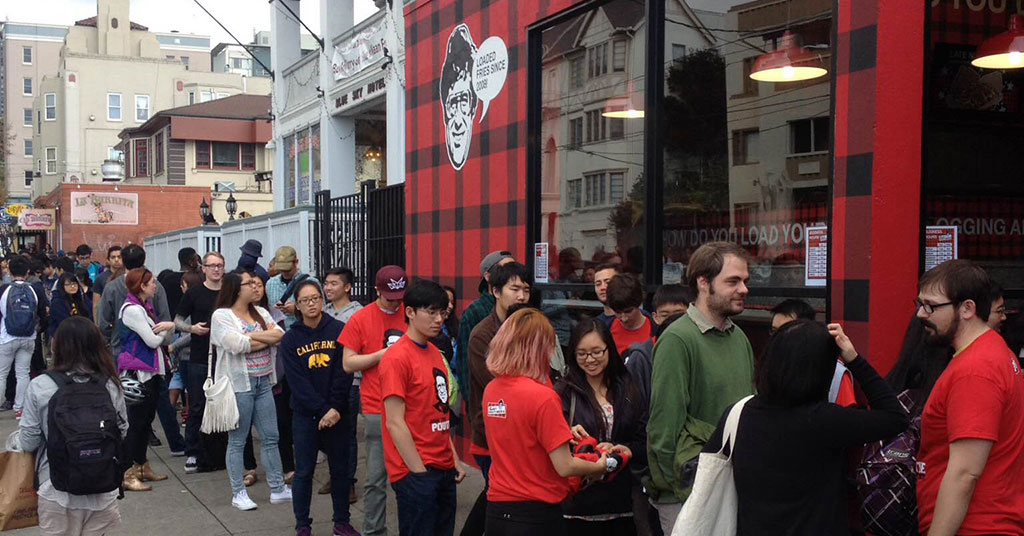 When Smoke's Poutinerie set out to introduce its famous loaded fries stateside, the Canadian global brand set its sights on Berkeley, California - a student driven town with a vibrant urban setting!

From day one, when more than 1,300 people streamed through the doors, the West Coast restaurant has had Plaid Nation Fans lining up to experience Smoke's Poutinerie; the colorful, cult brand that has achieved icon status for its entertaining twist on Canada's classic dish, Poutine. Smoke's Poutinerie serves up over 30 varities of Poutine and is known for their 80's Canadiana culture, signature lumberjack plaid, and glam rock music.

The brand's road to global expansion is all about nonconformity.

"Why did I open in Berkeley first? Because, I knew if I could make it there, we were going to conquer the U.S.," notes Ryan Smolkin, CEO, "Chief Entertainment Officer" and the creative genius, who founded the franchise and created a whole new food category in 2009, serving up the authentic Canadian classic dish of French fries, cheese curd, and gravy, topped with endless options.

Smoke's Poutinerie is shaking up the franchise world with their WEIRD, WILD + WACKY culture and a crazy smart franchise strategy. With more than 150 locations in Canada, and 50 more restaurants open or in development in the U.S., the quick-serve concept continues to expand its North American footprint and is gearing up for explosive international growth.

"We know our markets and we know what we are going after," Smolkin says. "It's all about finding the right franchisees and area developers, people who believe, breathe, eat, preach and LIVE the brand! " Smoke's Poutinerie is ready to take their ROCK N' ROLL stage show to an international level! Next, you'll see the Gravy Train speed into the Middle East, with international franchise agreements inked for Qatar and Saudi Arabia, and negotiations for development throughout the region. The franchise is also targeting growth for Europe, Asia, and Mexico. "These opportunities for expansion will offer the ULTIMATE Brand Build and help us take another step towards GLOBAL DOMINATION!," Smolkin says.

Smoke's Poutinerie franchise partners are finding a brand that serves up a strong return on investment, flexible franchise options, and an "insane" number of revenue streams. In addition to traditional Smoke's Poutinerie locations, the brand is leveraging growth with mobile, food court, and non-traditional locations, such as stadiums, universities, amusements parks, and airports.

Recently, Smoke's Poutinerie brought the great outdoors to travelers inside Toronto Pearson International Airport with the opening of its first mobile food truck style eatery. The restaurant, part of a partnership with global restaurateur HMSHost, has been an incredible launching pad for growth in the North American travel industry. Fans can expect to see a number of locations come down the pipeline this Fall!

"It's our goal to be in every airport, in every city, and every country in the WORLD!" Smolkin says. "Toronto Pearson Airport is the perfect location to launch our Poutinerie partnership with HMSHost and our very first Smoke's Poutinerie restaurant in the travel industry. It's only a matter of time until Plaid Nation Fans can get their Poutine fix in airports globally."

Smoke's Poutinerie also continues to make its mark in college towns and other hot spots with a strong, late night downtown urban core. Wherever Smoke's Poutinerie lands, the brand offers more than fries, curd, and gravy...it's a brand, it's an experience, it's an entertainment company!