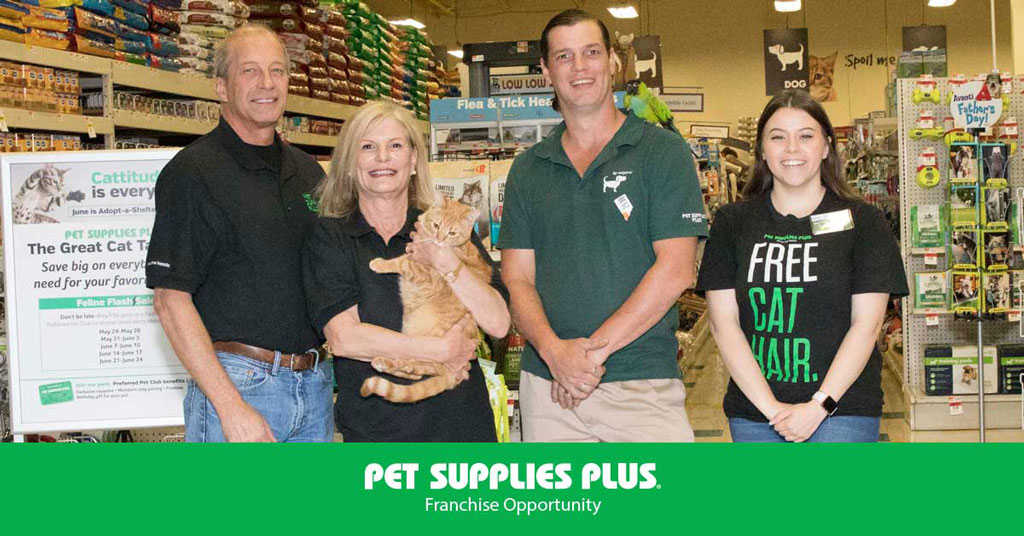 Pet Supplies Plus franchise owners Addy and Matt Shattuck were initially drawn to the brand because of the uniqueness of the concept and their passion for pets. They found a franchise they love – and then they found love together.

The Shattucks are 27-year veterans of Pet Supplies Plus, the industry’s leading franchise system in the U.S., with more than 450 stores in 33 states. Happily married for 13 years, they were operating stores on their own when they met at a Regional Owner’s Summit. Now partners in both marriage and business, they have four Pet Supplies Plus stores and are the proud owners of six cats and a Chihuahua named Bambi.

“I love pets! I also wanted to work for myself and thought it was a great concept,” says Addy, who first discovered Pet Supplies Plus from her best friend, who happens to be married to one of the founders of the Livonia, Michigan-based company.

Matt, who previously served as a supervisor at an electrical lighting company, had always dreamed of running his own business. When introduced to Pet Supplies Plus through family, he was intrigued by the brand’s original idea and saw franchising as a way to marry his passion with his drive.

Over the years, they have both watched Pet Supplies Plus grow into a strong national brand with a wide assortment of natural foods, hard goods, and pet services. Each store location has a customized store layout with a friendly, local neighborhood feel. Dashboards and reports provide franchise owners with a comprehensive, real-time picture of how their stores are doing. Summarized and detailed sales and margin data can be accessed anytime, anywhere via the web or their mobile device.

“In the beginning, I did everything by hand because we were a new franchise,” notes Matt. “It’s amazing how much our business has changed.”

With three decades of success as a premier retail franchise experience, Pet Supplies Plus offers franchise owners like the Shattucks, a distribution network that provides scale, profitability, and competitive operational advantages in a vibrant, recession-resistant industry.

Pet Supplies Plus stores average sales of over $2.2 million** according to the brand’s current Franchise Disclosure Document (FDD). Franchise owners point to low fees and labor costs as key benefits.

“This brand offers incredible support, which has been the key to success,” says Addy. “Solid training, advertising, and programs have made franchise ownership more efficient and productive,” she adds.

“It’s gotten so good. Everything is digital now!” says Addy.

The Shattucks are happy to report that they promote from within. Matt’s store manager has been with him for 12 years, and Addy’s district manager has worked with her for 16 years. Both Matt and Addy say the company culture is special because everyone is committed to working hard and helping others. In fact, Matt and Addy have inspired even more Pet Supplies Plus romances as they watched employees fall in love and get married!

“Seeing our employees fall in love while working at Pet Supplies Plus is so rewarding,” Addy says.

Pet Supplies Plus franchise owners like the Shattucks are finding success and the opportunity to achieve their own American dream of financial independence and personal growth, backed by the power of a brand with more than 30 years of successful retail experience.

To discover your own rewards that come with this unique franchise opportunity, visit petsuppliesplusfranchise.com.