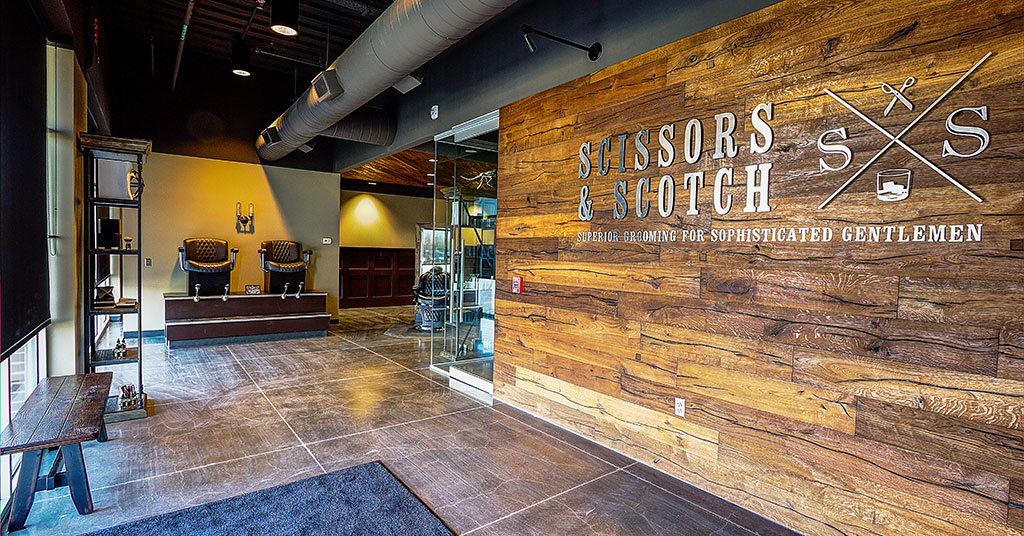 Scissors & Scotch is gearing up to expand nationwide with a unique men’s brand primed for franchise growth and a strong business blueprint with staying power.

A sleek hair care spot, with a private lounge and bar, Scissors & Scotch is not your typical barber shop.

The men’s grooming concept, which began franchising in late 2017, is all about the experience, says Erik Anderson, who co-founded Scissors & Scotch in 2015 with friends, and fellow co-owners, Sean Finley and Tanner Wiles.

“We aren’t just in the haircut business. We’re in the customer service business,” says Anderson. “A great haircut is a prerequisite. You come to S&S because you know you’re going to get a great haircut. You keep coming back because of the way you’re treated, how you feel, and the experience.”

As with most winning notions, Scissors & Scotch was born out of need.  Anderson, weary of the never-ending hunt to find someone he could book, and count on, to regularly cut his hair, began mulling over the idea of a fresh, modern approach to a haircut and a shave. His research uncovered a handful of shops that serve alcohol, but none with a full-service lounge and bar. Scissors & Scotch would be the first to offer a well-rounded, experience-based approach to men’s grooming—the fastest-growing segment of the beauty industry.

Anderson knew the first night he talked over the business proposition with Wiles and Finley—over cocktails, naturally—that Scissors & Scotch “could be something special.”

The trio opened their first Scissors & Scotch the following year in Omaha, Nebraska.  Since then, the company has performed over 125,000 services, signed up thousands of annual members, and expanded to three new cities—Des Moines, Denver, and Oklahoma City.

Anderson describes Scissors & Scotch as a relaxing “blend of an old-school barber shop with a modern-day look and feel.” Each shop offers haircuts, shaves, trims, waxing, spa services, and shoe shines, along with a complimentary hand-crafted cocktail, coffee, or cold one from the lounge and bar, just steps away.

“We quickly realized that our target audience is much bigger than we originally thought,” Anderson says. “Guys today, regardless of age or income, are more willing to pay for a great experience. At S&S, they can get a quality haircut, build a strong relationship with their barber or stylist, and enjoy their favorite premium cocktail in a relaxing environment, all included in one price.”

Anderson, 29, and Finley and Wiles, both 30, bring a diverse background of sales, customer relations, finance, and law to the brand. They have spent the past few years creating a business model that attracts and retains the best employees, while perfecting the processes and comprehensive training to grow the brand quickly and strategically through both franchising and corporate-owned stores.

Scissors & Scotch has signed an area franchise development agreement to add four stores in Kansas City and is in talks with single- and multi-unit franchisees to develop additional shops across the country.  Anderson anticipates Scissors & Scotch will have 175 units open or in development within the next five years.

The brand is targeting investors with a passion for improving the men's grooming experience and building lasting relationships – with their clients, team members, and community, notes Anderson.

“We want good people. That’s our main requirement,” Anderson says. “With a great operating team that truly believes in the concept, Scissors & Scotch will work anywhere. At the end of the day, everyone needs their hair cut.”